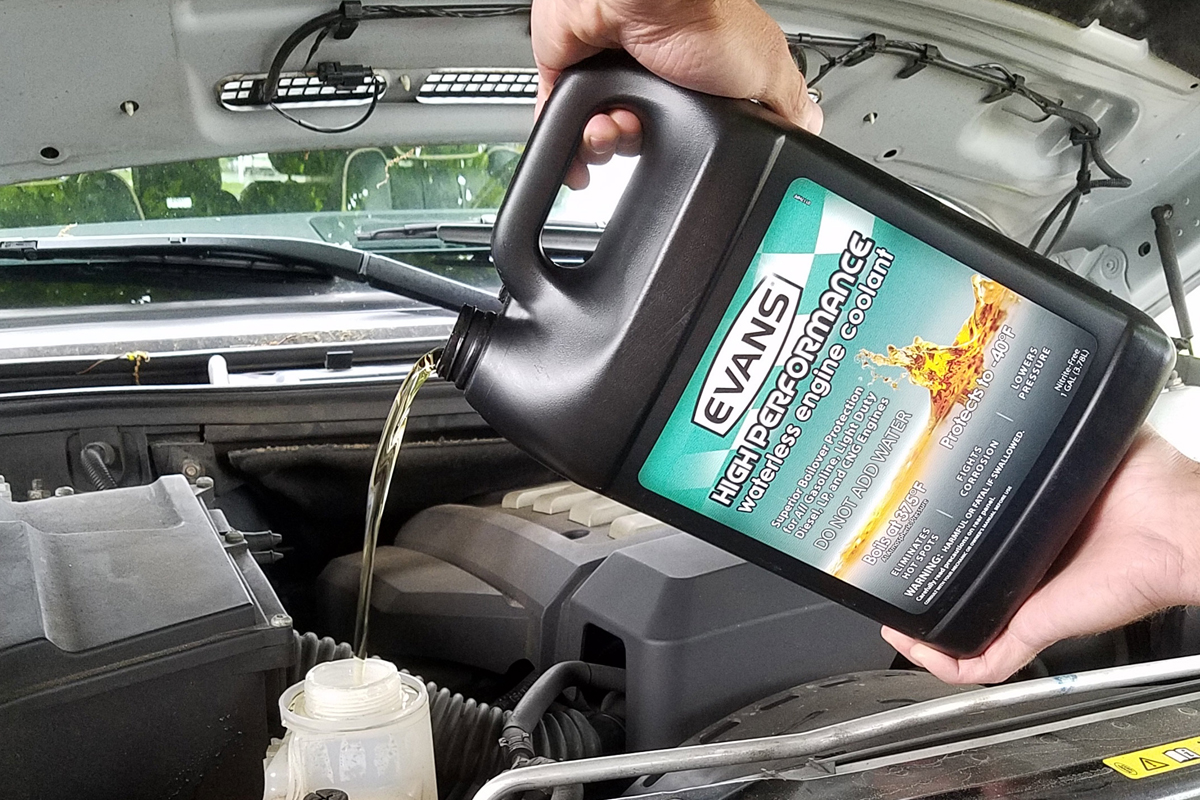 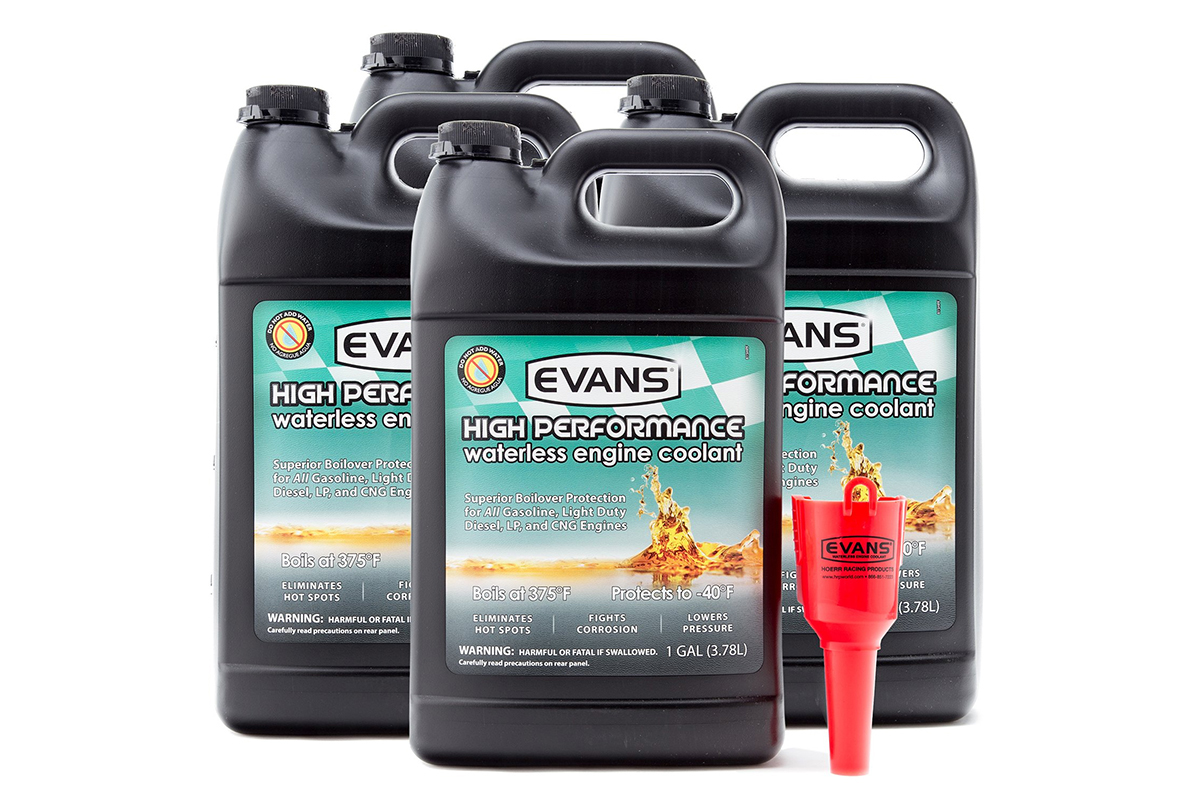 Here at Champion Cooling Systems, we have seen a variety of coolants used by our customers. We’ve already covered what coolants not to use in our Coolant article, and briefly touched on using a high performance coolant, such as Evans Waterless Coolant. While we have never suggested that it can’t be used, we wanted to make sure that those who choose to use Evans know the details about switching over to this brand.

If you’ve been watching videos on YouTube, you’ve likely seen that Evans is used by a rather famous car collector: Jay Leno. He’s been using Evans coolant for a very different reason than you might consider for your daily driver. When you have dozens of cars, they don’t get driven every day – or week, or month.

One of the properties of Evans coolant is that it doesn’t break down like conventional coolant does, which require changing on regular intervals. Evans coolant can last the life of your engine, as long as your gaskets hold up.  For a collection such as Jay’s, that means adding Evans coolant once and not having to change it. But there are other qualities that make Evans an acceptable coolant, and we reached out to Mike Tourville, Director of Sales and Marketing for Evans, to get his input and to answer some questions.

One question Mike says he does get often is with regards to being waterless. He said, “We’re often asked this, and ‘waterless’ doesn’t mean ‘liquidless’.  Evans is a blend of glycols, with additives, and of course – no water.”

To understand why and when enthusiasts use Evans coolant we asked Mike what his thoughts were when it comes to a daily driver.  Mike had this to say, “Evans would perform fine, but in a daily driver that is not experiencing any issues there may not be a need to use Evans.”

Does that mean that Evans shouldn’t be used in a daily driver? He continued, “If someone wanted to keep their daily driver a long time, they may want to consider Evans for long term preservation and the assurance that it won’t cause corrosion.”

We’ve learned from Mike that Evans Waterless Coolant stops corrosion and electrolysis, and prevents vapor formation, reduces pressures, and stops boil over. Because Evans’ boiling point is so high, it doesn’t vaporize and reduces those pressures, which Mike says can help prolong the life of the cooling system.

When you look at the advantages, it seems there are no disadvantages and that everyone should use Evans as a solution to their cooling woes. But even Mike has told us that it’s not a cure for a problem, and as we have said about our radiators before: if you have an overheating issue, you need to find out what is causing the problem first. 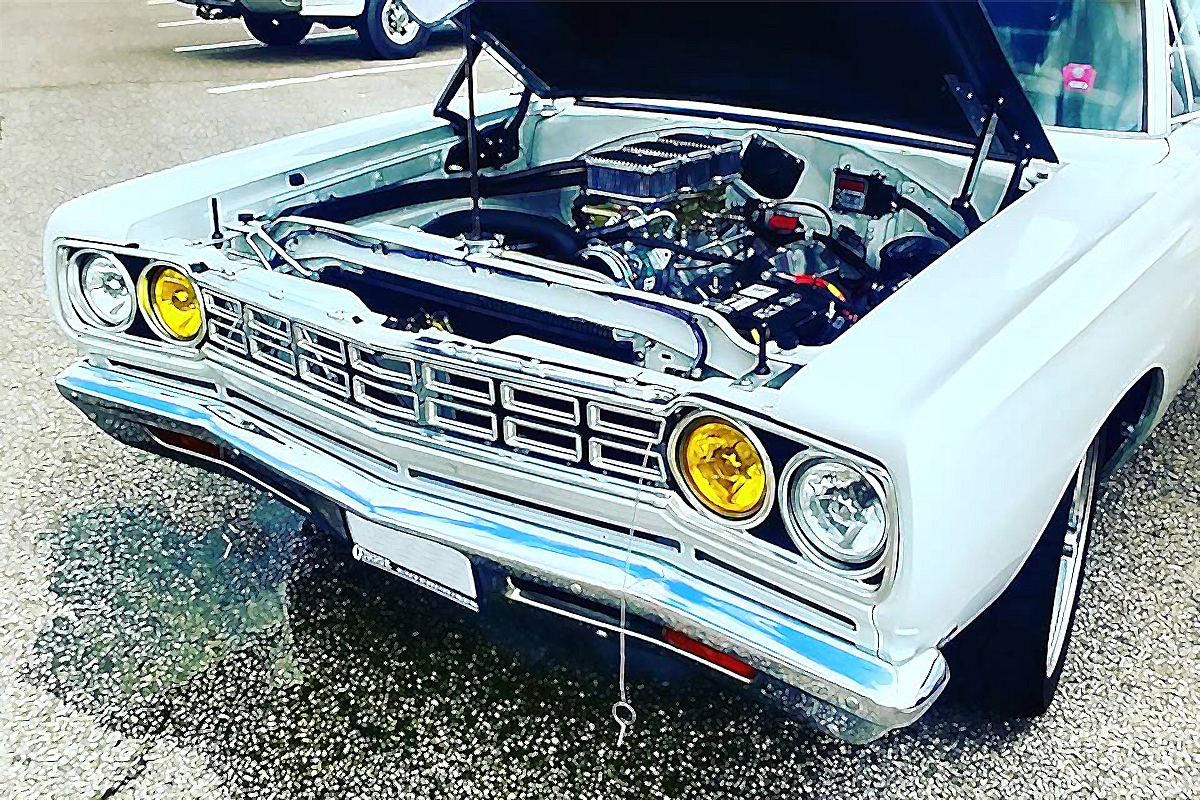 Likewise, Evans isn’t a solution to a problem; if you’re having overheating issues don’t expect Evans coolant to fix your problem. Mike told us, “Overheating can be caused by several factors – and can be attributed to any component of the cooling system, such as the fan, radiator, pump, thermostat, etc., aside from the liquid used.  But assuming all is in good condition, Evans can prevent overheating.” 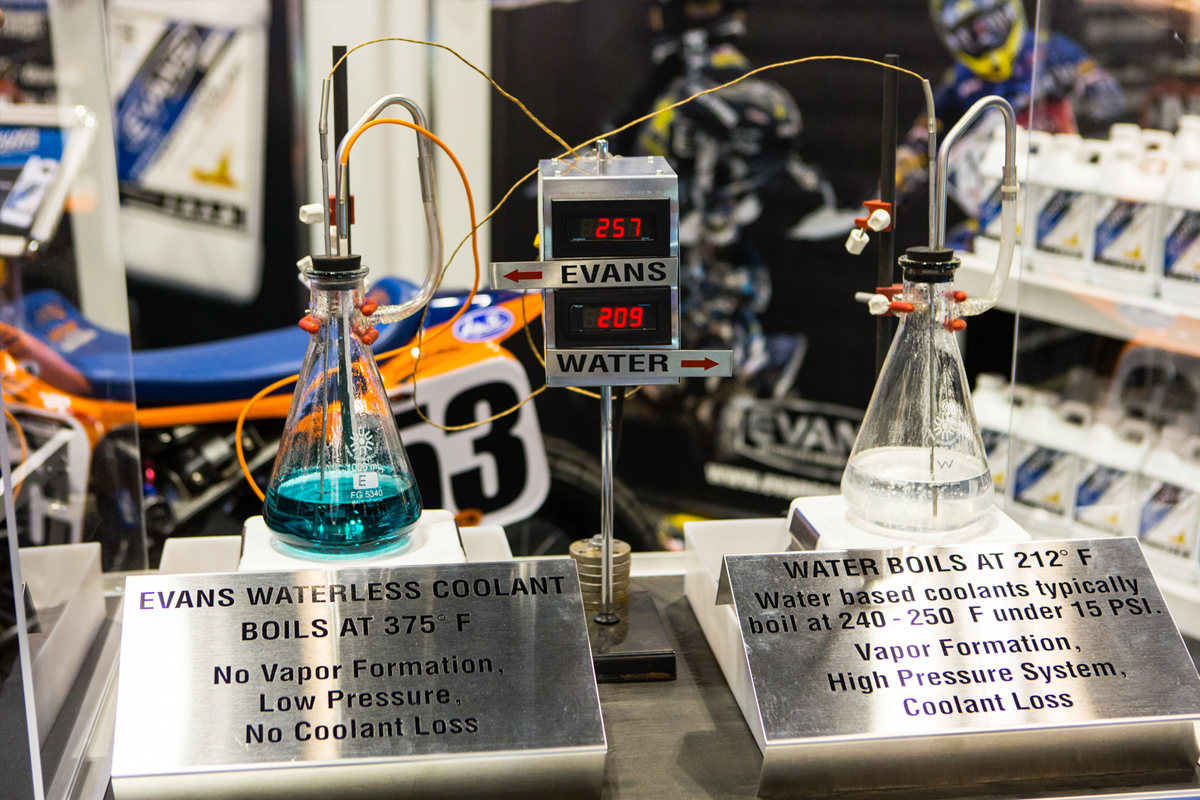 He explained further, “To be technically correct, Evans prevents boil-over. The coolant may still get hot and into the ‘red’ zone, but it will not boil over, and no loss of coolant will occur.” This is because Evans’ higher boiling point means pressures are reduced.

Does this mean that Evans will always produce a cooler running engine? We told Mike we’d ask direct questions, and he promised to give direct answers. To that question, Mike said, “No, not always.” He then directed us to what they have written up about engine temperatures on their website.

When you discuss disadvantages, it’s more of a “keep in mind” matter than a bad thing. For starters, Evans Waterless Coolant is considerably more expensive than conventional coolants.  However, when you consider that Evans can last for decades, the cost factor diminishes after the initial outlying of cash. So where are the disadvantages? We asked Mike to explain.

“In the rare event of a leak, Evans may not be readily available. Evans cannot prevent leaks, but makes them less likely due to the lower pressure.  Price is higher, and that would make for an expensive leak,” he said. For this reason, it’s recommended that you have at least an extra gallon on hand, stored either in your car or in the garage. If you do develop a leak and need to refill your radiator. You can add water, or another coolant to get home, however, it is recommended to do a complete flush and reinstall Evans within a short period of time. 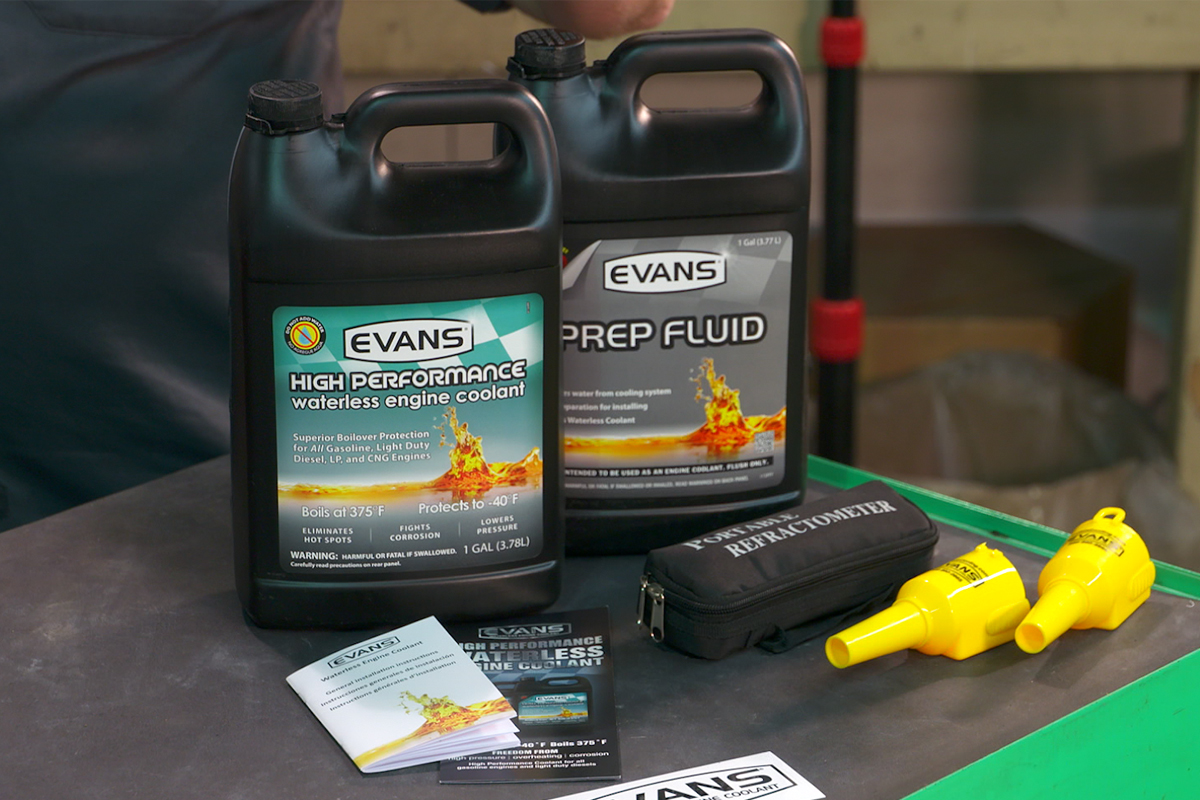 Mike told us, “No water should be added at all, except in an emergency,” when asked about addressing leaks. When water is added, the benefits are compromised, and protection is diminished, but it will get you home. He stated that a glycol-based coolant won’t contaminate Evans coolant because Evans is also glycol-based. However, he did add this, “A little is a relative term, think of 3 percent or less as a little, because above 3 percent the boiling point begins to drop.”

That means when converting to Evans, you should do a complete flush of the existing coolant – including the heater core. Evans can provide you with its Prep Flush to help facilitate that conversion; it’s another expense, however, it’s a necessary expense. That 3 percent or less is mandatory for Evans to perform at its peak.

What Should I Know About Using Evans?

Evans is a good coolant for high-performance builds, and works great with aluminum radiators because there are no electrolysis worries. But Mike does suggest using a single-pass radiator instead of a double-, or triple-pass unit. “Single-pass is better to enhance flow,” he said. “Evans performs better with more flow.  Double- or triple-pass radiators may be restrictive and decrease flow, and Evans may run warmer in those cases.” 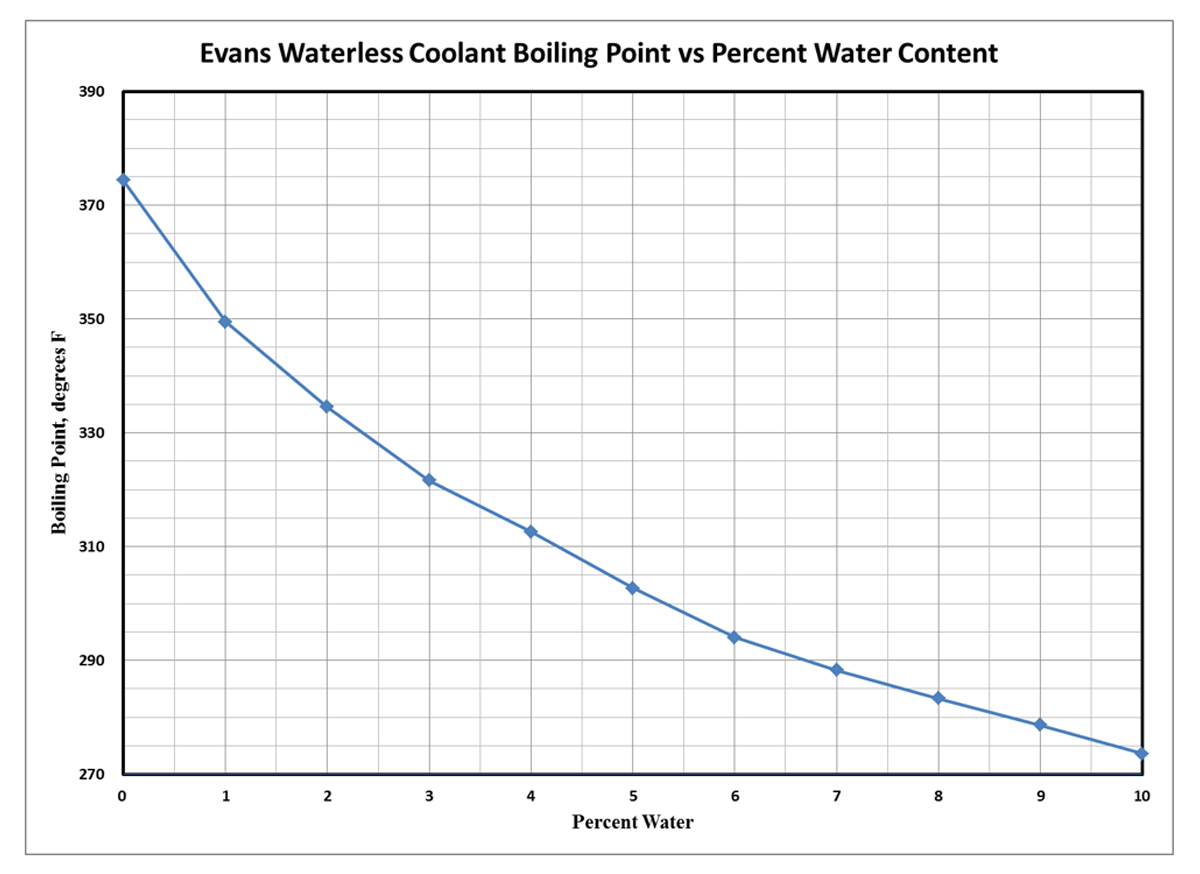 If you’re ready to convert, knowing what you now know, Mike does have some tips to remember. “Make sure you get ALL the water (old coolant) out,” he said. He suggested that instead of using high pressure, “using high volume air – like a leaf blower or shop vac in reverse – is more effective to force out remaining coolant.”

“But to qualify that, asking anyone to get the engine bone dry is asking a lot. So realistically we recommend no more than 3% remaining. This keeps the boiling point still high, but the more water added the boiling point begins to drop.”

The conversion process to Evans Waterless Coolant is not complicated, but Mike recommends that it is done thoroughly and according to the instructions. He said, “An extra 20 minutes is well spent time to get it right.” Complete instructions can be found on the Evans website.