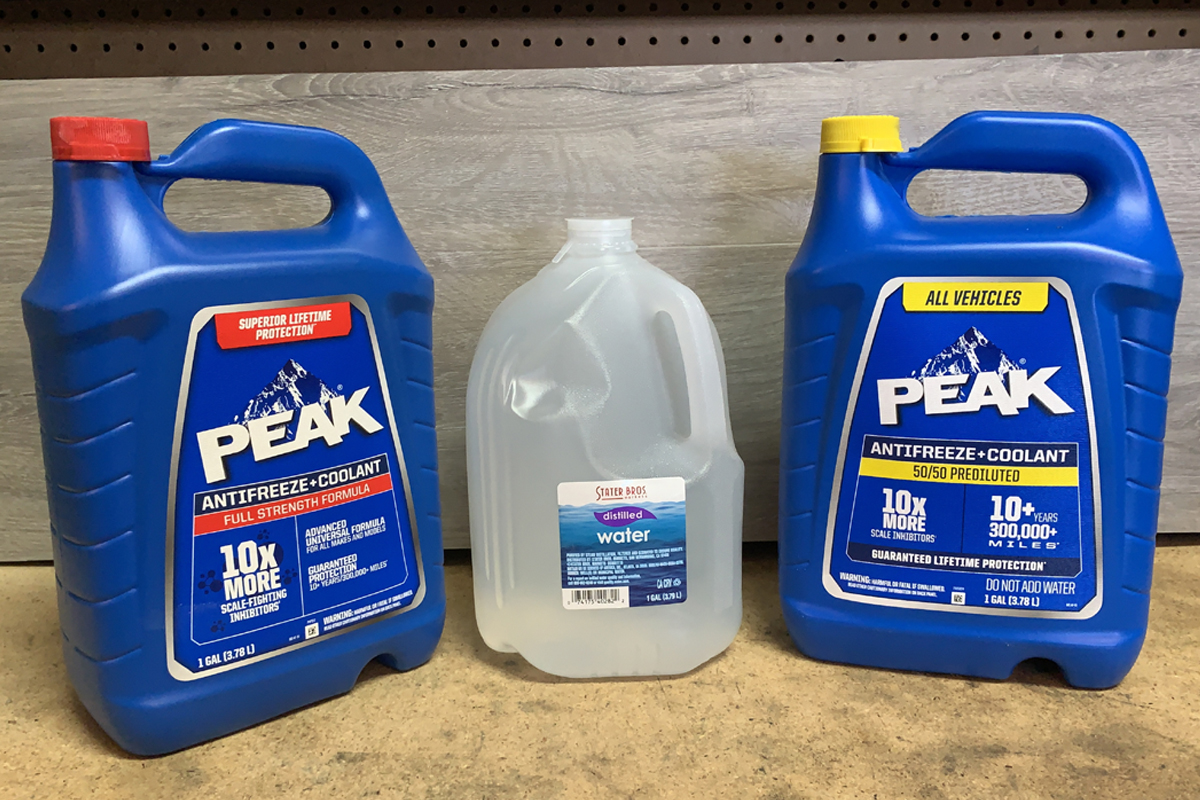 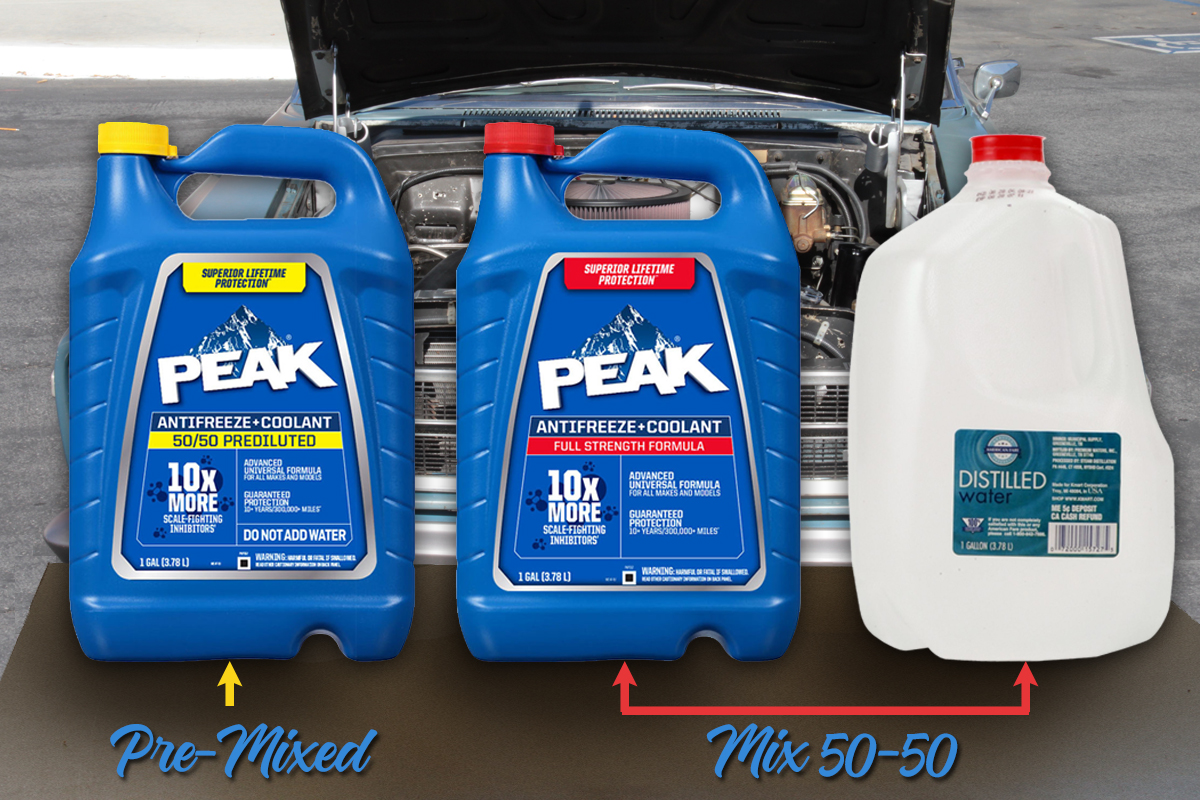 We get asked quite often what coolant we recommend for our radiators, and while we do recommend Peak, we also have a type of coolant that we discourage using. We have found that the ‘red’ coolants, such as Dex-Cool and Toyota’s Long-Life coolant, can clog our radiators and are prone to leaks in a vented system such as ours. We recommend the traditional ‘green/yellow’ coolant from most name-brand manufacturers, and to mix that coolant with distilled water at a 50/50 ratio.

Most any of the red/orange/pink coolants, and some of the European yellow coolants, are specially formulated by the manufacturers, and in the case of Dex-Cool we’ve found that it works best in a closed system. Our system utilizes an overflow tank, and as the cooling system expands, the excess is stored in the overflow tank, then reintroduced to the system when the pressure subsides.

Many of these newer blends of coolant contain inhibitors called organic acids, and are recommended for five years or 150,000 miles. But they aren’t really compatible with our radiators, and shouldn’t be used in older American engines. While the manufacturers of these coolants recommend only using them in an aluminum radiator, as opposed to the copper/brass radiators, we still don’t recommend them in our all-aluminum radiators. 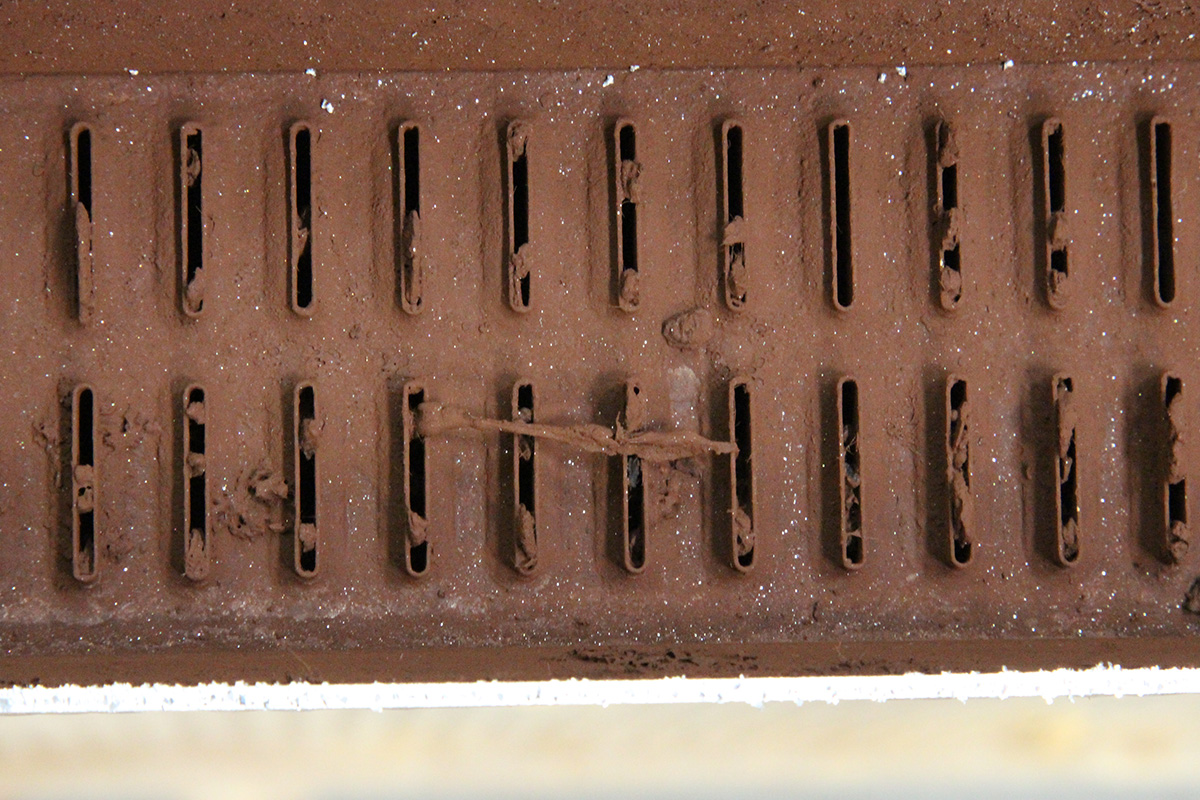 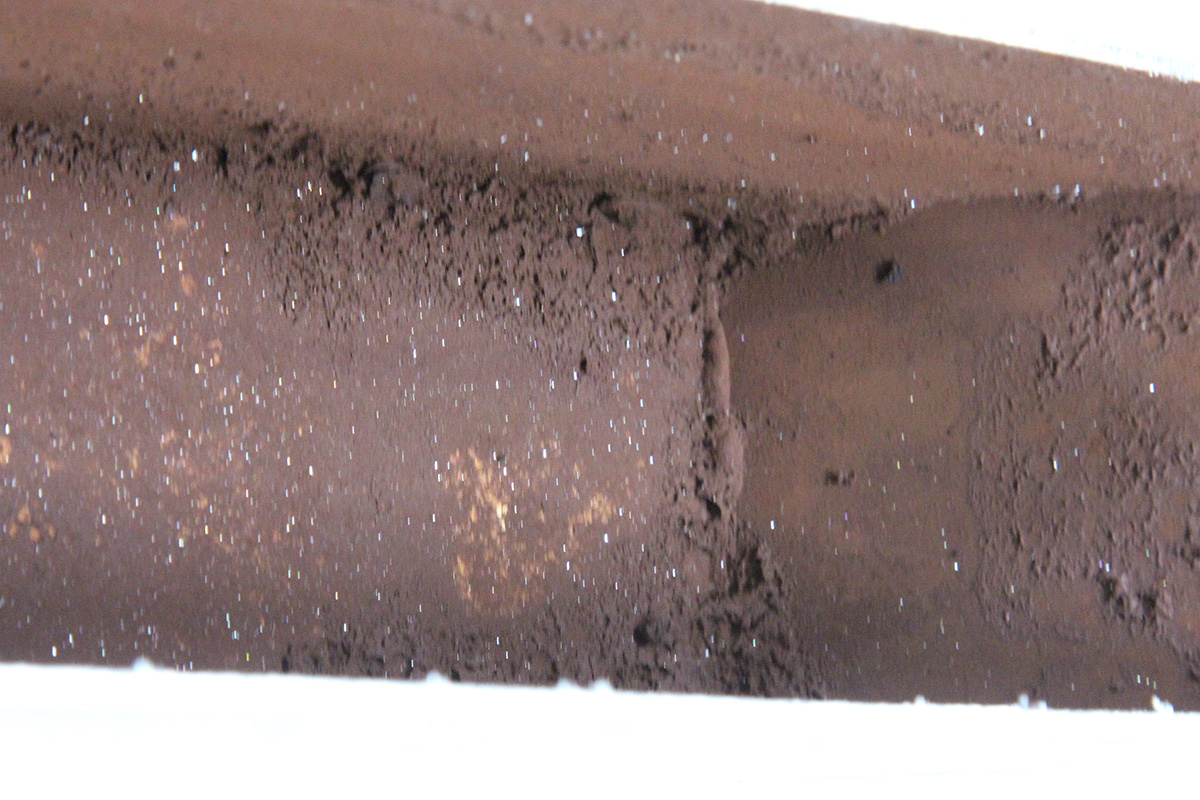 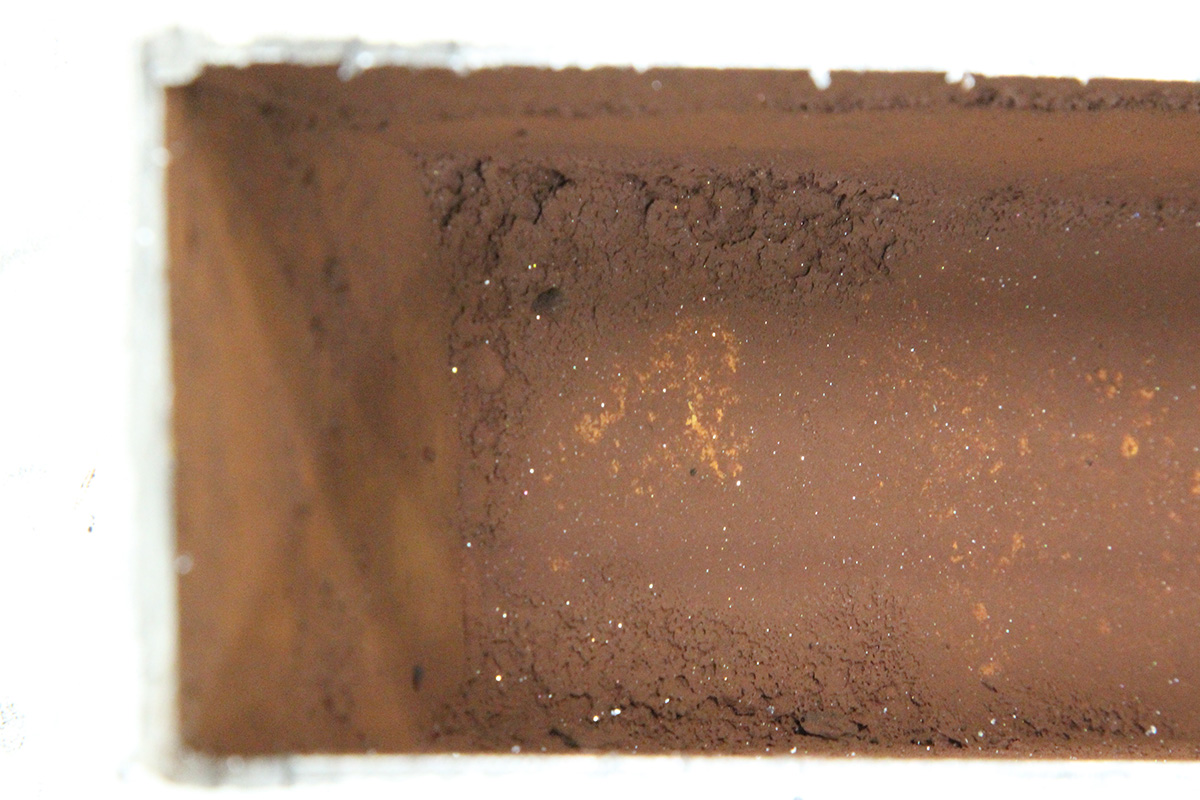 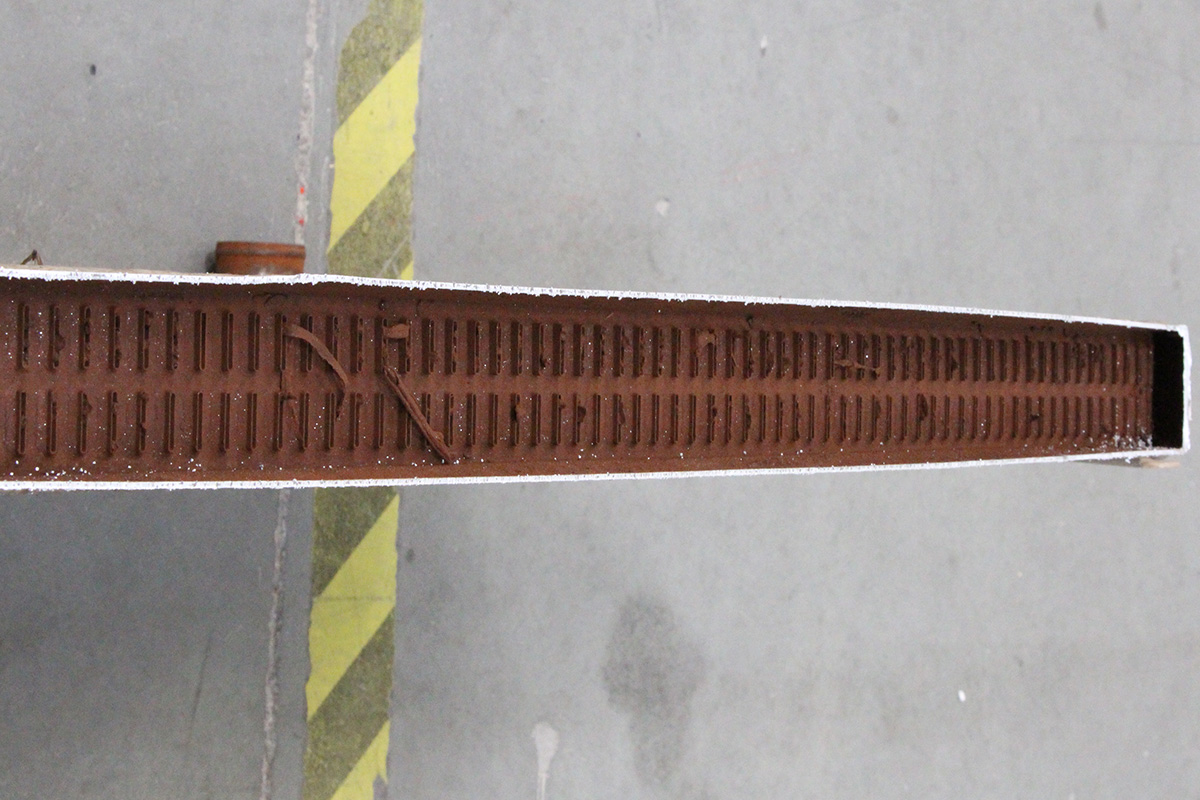 The radiator above had one of the ‘red’ coolants running through it and it became clogged. We cut the top tank off to see what’s inside and we were quite surprised at what we found. For this reason alone, we recommend using a glycol based coolant and not the new manufacturer specific coolants in red/orange/yellow colors.

It should also be noted that these newer coolants are not compatible with the regular green/yellow coolants, and should never be introduced to any system that didn’t already have a coolant with those organic acids. They might work fine on your Diesel Ford or your Import vehicle, but they could give you problems with our radiators.

If you have put these red/pink/orange coolants in your cooling system, we recommend removing it and completely flushing your engine and radiator to remove all of the newer coolant. It should be replaced with the traditional green/yellow coolant most of us are familiar with, like Peak, Prestone, Zerex, etc.

Should I Buy Concentrated Or Pre-Mixed?

We also get questions about whether we recommend the concentrate (100% coolant) or the pre-mixed (50% water), and that really comes down to how much you want to spend. A typical cooling system is going to require between 2 and 3 gallons, so if you do buy the pre-mixed, it’s best to buy 3 gallons of it.

If you don’t mind mixing it yourself, buy two gallons of full-strength coolant, and two gallons of distilled water. A standard box store sells name-brand coolant for just under $17 per gallon, and distilled water is about a buck at most grocery stores. That puts your out-of-pocket total to about $36 for a total of four gallons (with some left over for later.)

If you buy the pre-mixed, it runs just under $14 per gallon, which comes out to about $42 for three gallons – giving you a little left over if your car takes more than two gallons, as many do. Many will simply choose the pre-mixed because it’s simpler, but it’s your prerogative.

If you decide to mix it yourself, pour one gallon of distilled water in the radiator, followed by a gallon of the coolant. With the empty coolant jug, pour a half-gallon of distilled water and a half-gallon of coolant for a 50/50 mix, then combine the remaining half-gallon jugs into one jug. Now you have two more gallons of your own 50/50 mix and you can proceed to fill up the cooling system the rest of the way. With two gallons already in your radiator, top it off and start the engine. When the thermostat opens and coolant starts flowing add more as needed until the radiator is full. After driving the car, let it cool down and add more if needed and top it off.

Change Your Coolant Regularly And Flush Your System

Changing your coolant every two or three years is something we can’t stress enough. It’s a minimal expense, but something people don’t like to do. Think about how much money you have invested in your vehicle – in the engine alone – and it almost seems like a no brainer to change coolant every once in a while to keep your cooling system up to par.

Many people who own classic cars or trucks will drive them only when the weather is good, and not every day. So the vehicle sits for days at a time – or weeks – and the fluids just sit there. While it’s not detrimental to your radiator or engine when you have a proper mix of coolant in the system, it should be replaced on regular intervals. We aren’t telling you that it needs to be changed, it is merely a suggestion that should be a part of regular maintenance, like changing oil and other fluids. 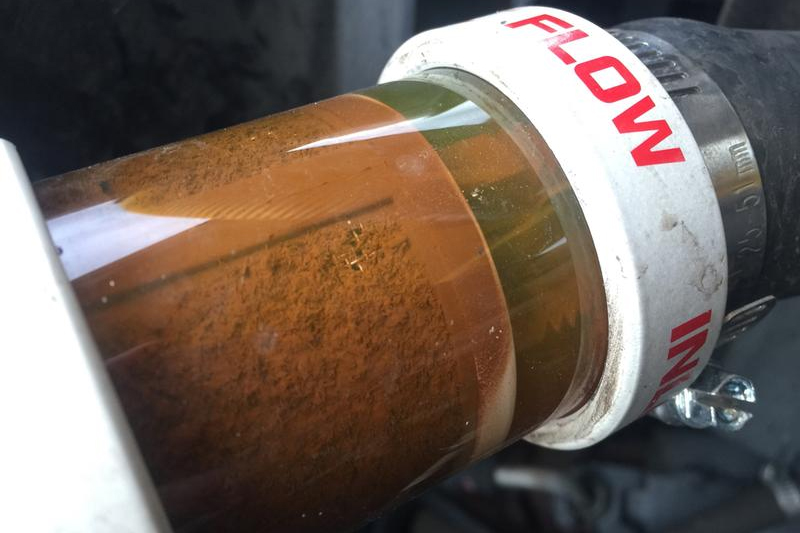 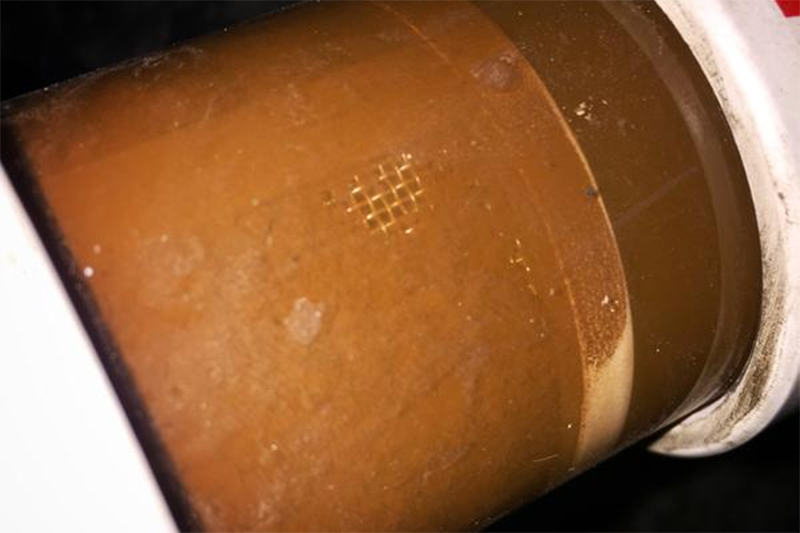 The customer who posted these pictures was glad he bought a filter, and we’ve talked to others who wish they had. The images above show what was trapped in the filter after switching from one of the red coolants. Imagine this gunk clogging up your new radiator.

In between fluid changes, we also recommend flushing the cooling system out with regular water, and not to use any type of chemical flush. Straight water is good, and you can use white vinegar as a flush to help remove any build up of corrosion, just be sure not to let it soak in the vinegar. After everything starts coming out clear during the flush, close it up and pour in your concoction of green stuff and distilled water, and go cruising! 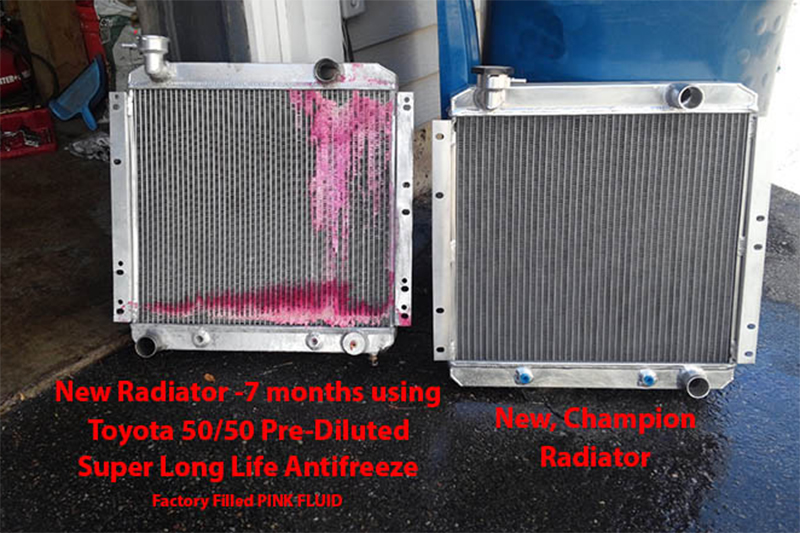 This radiator above was subject to the pink stuff that Toyota sells. It didn’t work well with our radiator, and we recommended using the green stuff, as it is formulated to work with all vehicles and cooling systems.

2 Replies to “What Coolant Color Should I Use In A Champion Radiator?”