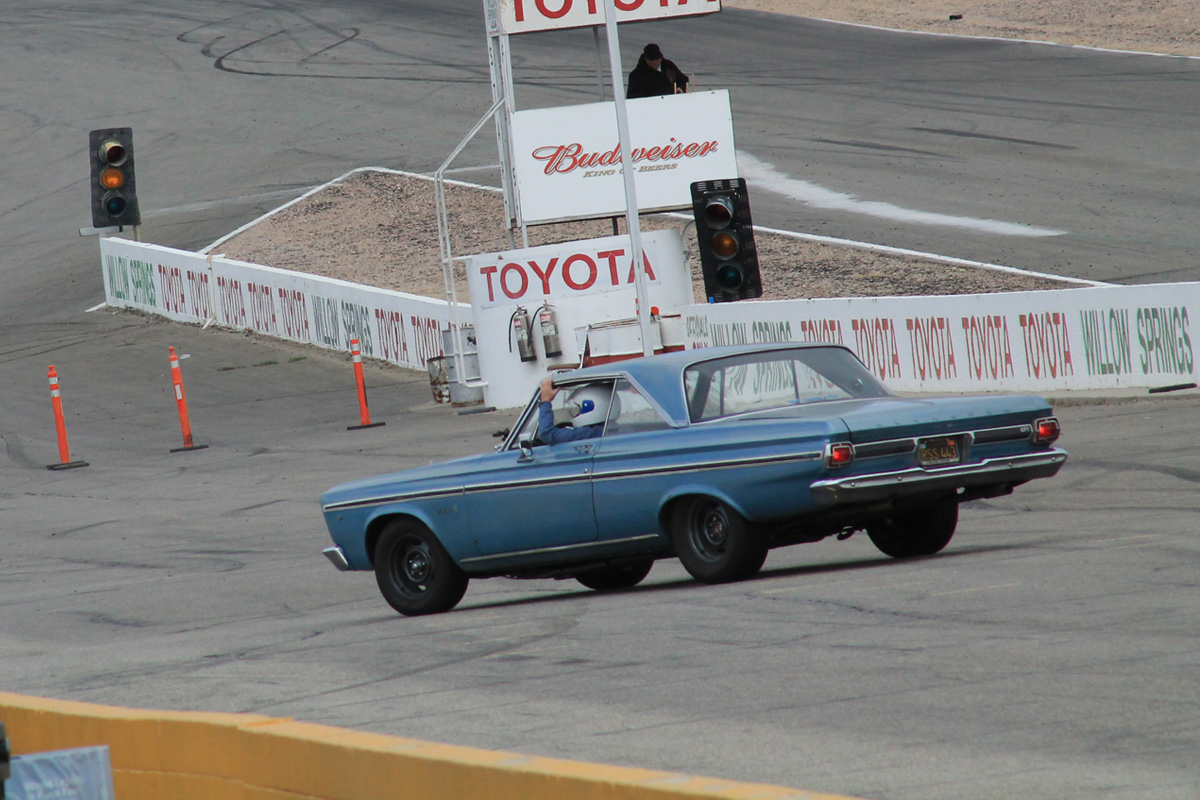 It was never planned to take the Belvedere out on a racetrack, it wasn’t even planned to try my hand at drag racing, either. Even though the Mopar B-body cars are more known for drag racing than they are for cornering, they were known to hit road racing tracks and big ovals thanks to the likes of Richard Petty, and others.

Most people had seen his 1964 and 1966 Belvederes, but few pictures show up on the internet of Richard’s 1965 car, primarily because he only raced a half a year in 1965. A little known fact is that he had tried his hand at drag racing that year with a 1965 Barracuda with a swapped in 426 Hemi – the engine that Bill France had outlawed in NASCAR the year before after Chrysler’s dominance.

Petty’s introduction to NHRA was rather successful, but after an accident sent the car into a crowd of people, killing an 8 year old boy and injuring others, Petty’s motivation diminished, and he returned to NASCAR with a 1965 Belvedere II, with the famed Hemi, for the remainder of the year. 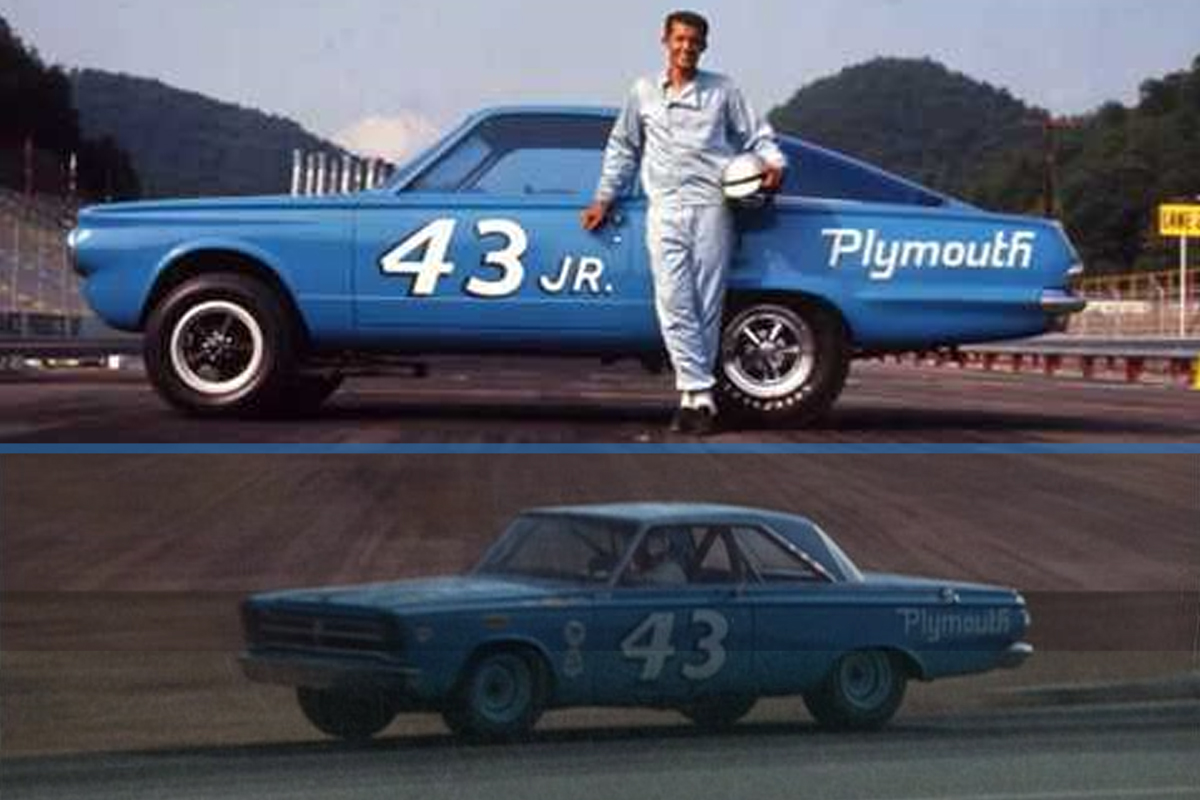 Petty was always a favorite where ever he raced, and of course Mopar was his brand of choice, as was the Elephant: the 426 Hemi. He caught on to drag racing quickly, as you might expect.

I had always been a Petty fan, and seeing a car just like mine (and not too far off in color) encouraged me to try out road racing and Open Track Day at Willow Springs International Raceway. I didn’t have a whole lot of confidence that the car would do really well; after all, I still had the dry-rotted rubber bushings that were installed some 40 years prior, and I had only two modifications that gave me enough encouragement to try it out.

I had done a much needed, OE-style front disc brake upgrade, swapping in an 11-inch disc brake and replacing the ineffective drum brakes. The other upgrade was a set of sway bars from Hellwig Products. I had purchased a different set of sway bars prior to that, but the bar constantly shifted due to a very poor mounting system, and I wanted something better. 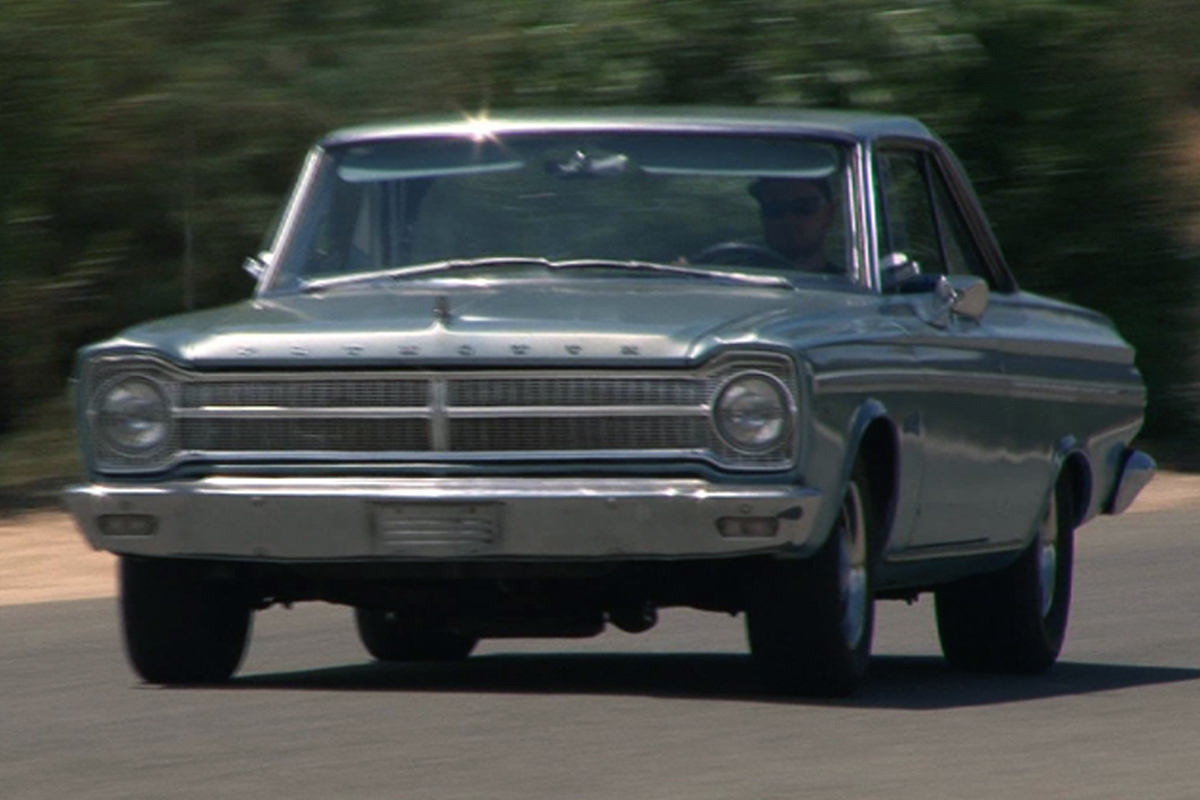 The Belvedere was one of the vehicles featured in a Mickey Thompson video for it’s Sportsman S/T street tires.

The car was fun to drive and it was reliable, but the idea of hitting the road course was not exactly planned. I had paid my track fees already, but the car I was going to take was not running for one reason or another, so it was either rent a car or take the Belvedere.

Rolling stock on the Belvedere consisted of a set of 15-inch Cop Car Rally wheels, and Mickey Thompson Sportsman S/T tires. The Belvedere was even featured in their Sportsman S/T video (below). After seeing how far I was pushing the tire, I showed a photo to the people at M/T. There was some severe sidewall flex, and their engineers told me, “Yeah, please don’t do that anymore.” After all, it’s a street tire, not a track tire.

The first trip out to Willow Springs was a great time, and much of it thanks to the Hellwig sway bars. They kept the car level in the turns, and despite the fact that I was driving a 50+ year old car on the track with modern muscle cars, imports, and European sports cars, I was pleasantly surprised.

The front bar is a hollow bar but plenty stiff enough for big cars; the rear bar is a solid unit that is only slightly smaller in diameter. I even got to tour the Hellwig factory where everything is done in house, including their own powdercoating process. Hellwig President, Melanie White, encouraged me to ask the guys in the shop to show me the fire, and of course they obliged. 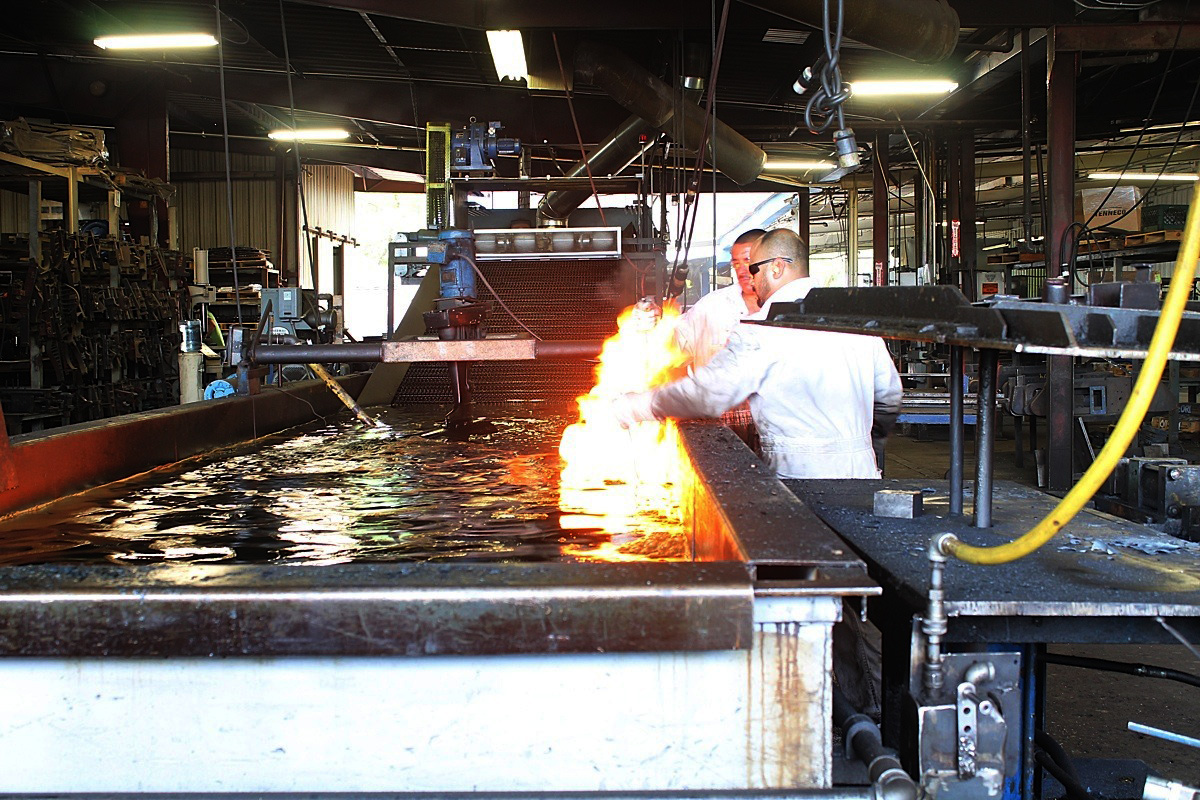 Hellwig has been bending steel since Melanie’s great grandfather started the business back in the 1940s, going from driveway to driveway installing his transverse springs on Fords for just $7 to help stabilize cars and make them handle better. Today, they’re still in the same location in Visalia, California, that they moved into back in the 1960s.

I had asked why Hellwig powdercoated its sway bars with a hammertone finish and learned an interesting fact. One ingredient to sway bars that is a ‘must have’ is a silicone lubricant, which helps eliminate the squeaking and keeps the bushings from drying out. The hammertone finish works to trap some of that lubricant in the pockets of the finish, which keeps it from squeezing out when the clamps are tightened. 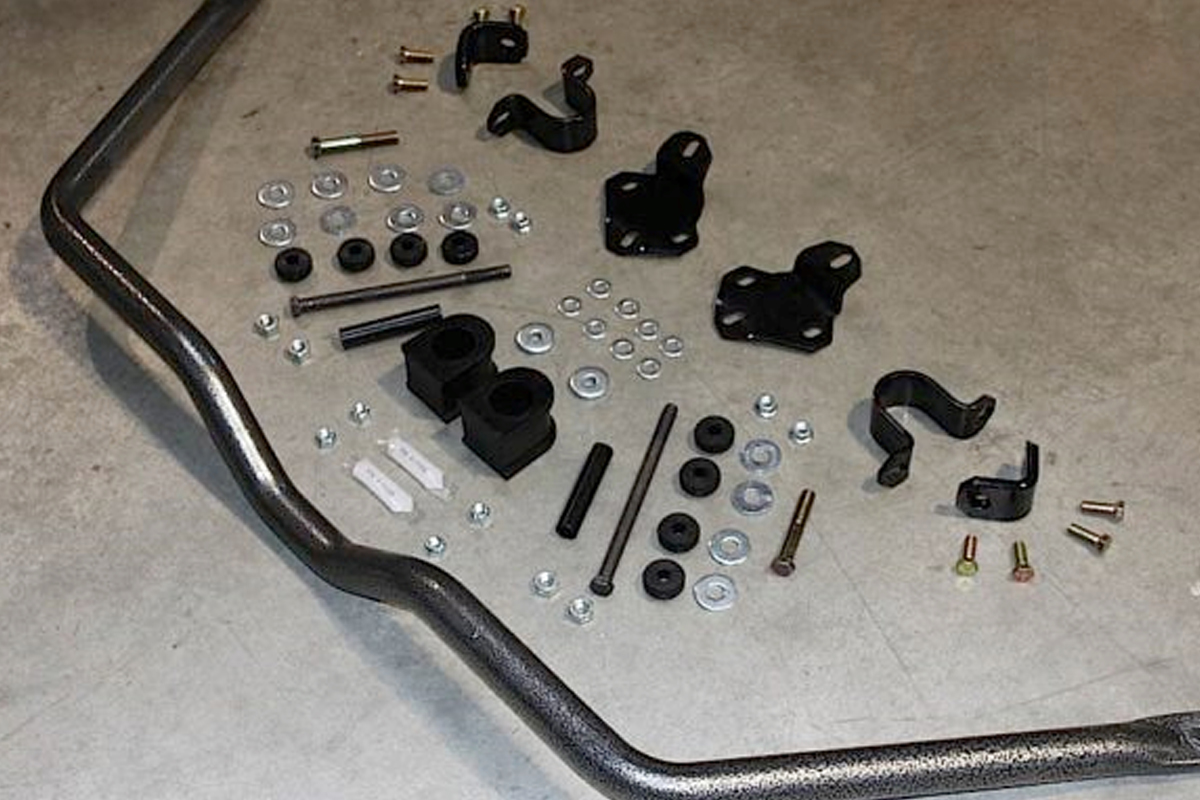 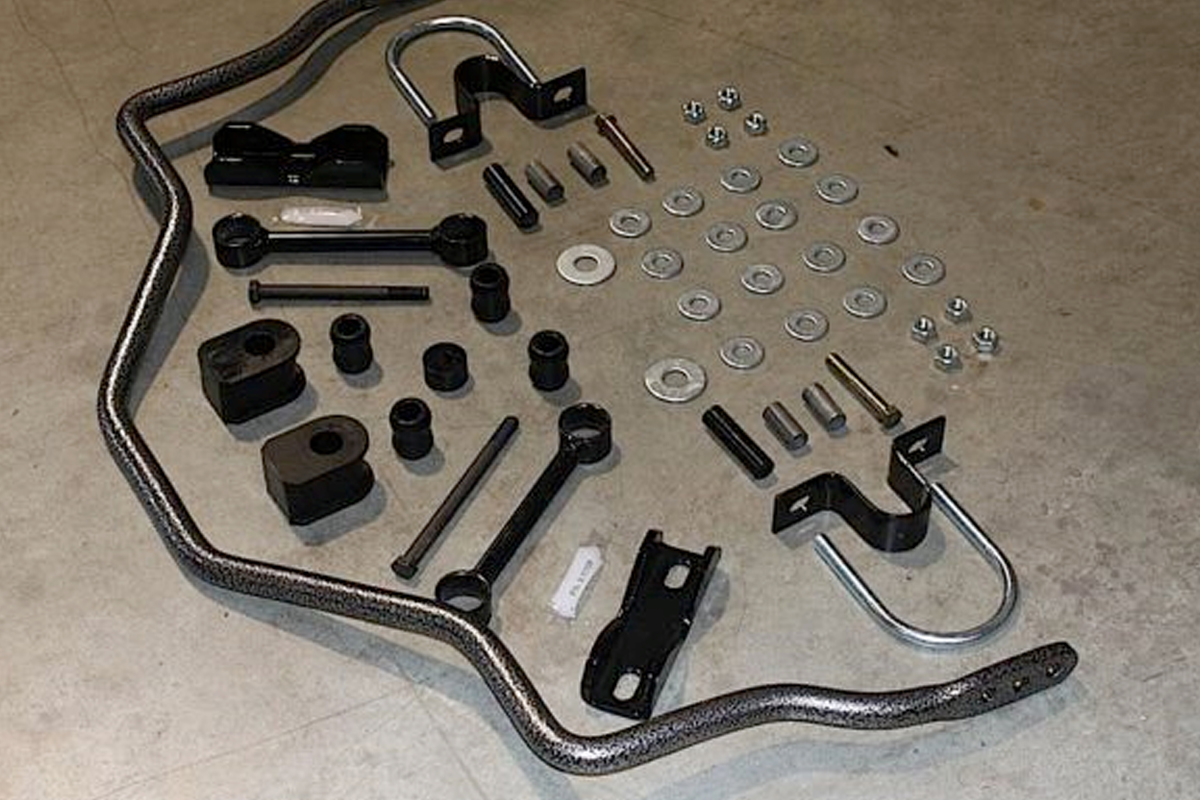 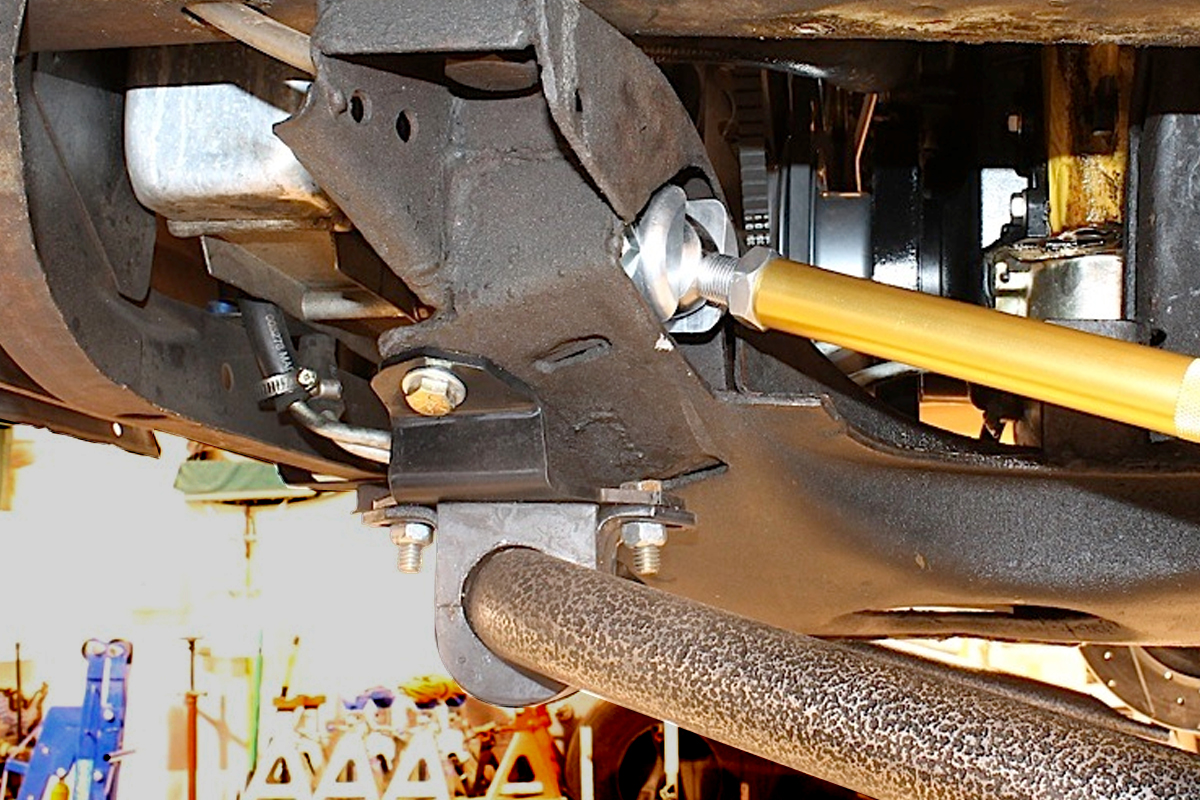 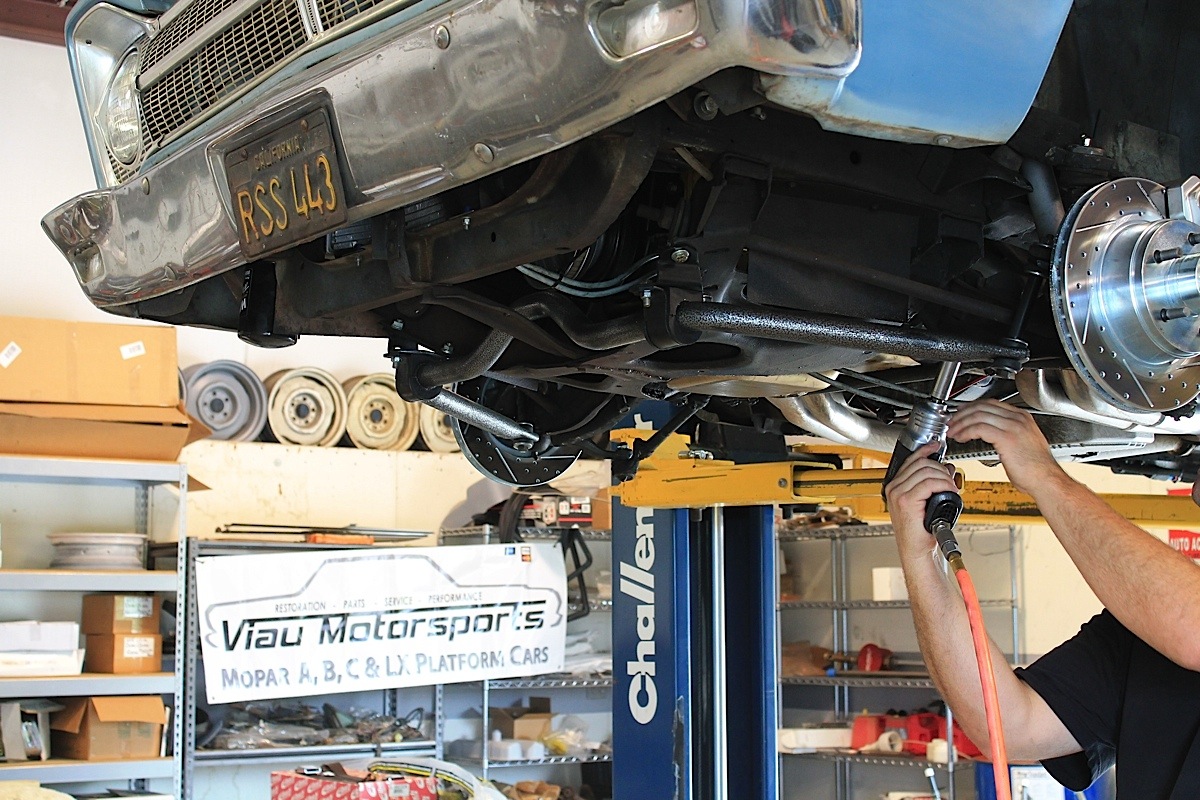 You can see the front sway bar mount (lower, left) and how it’s held in place by four bolts. The other bar had a single bolt mounting the sway bar to the frame, and it was constantly shifting. That bar came off a week after it was installed.

The sway bar kits include everything you need to install them on your muscle car or truck, regardless of whether you have factory-installed sway bars or not. The front bar installation was far superior to the generic bar I had previously installed. As mentioned, it kept shifting every time I drove the car, and that wasn’t good.

Looking at the mounting from the Hellwig kit, there was no way the bar was going to shift on me. The few quick trips I made around town after the sway bars were installed gave me a lot more confidence to take turns just a little quicker. I had been autocrossing since the 1980s, but never thought to take a big car out to the track. The Pro-Touring scene was just starting to gain steam, and we all know how much that scene has grown in the past decade. 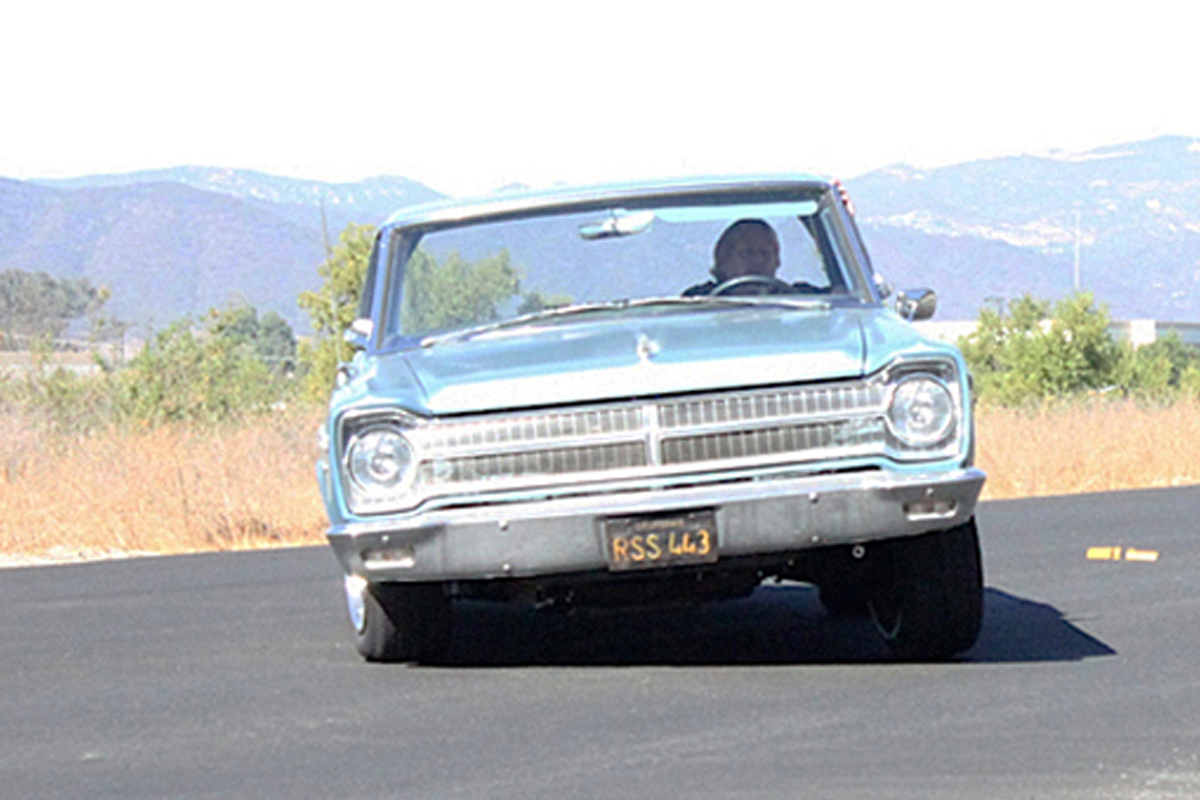 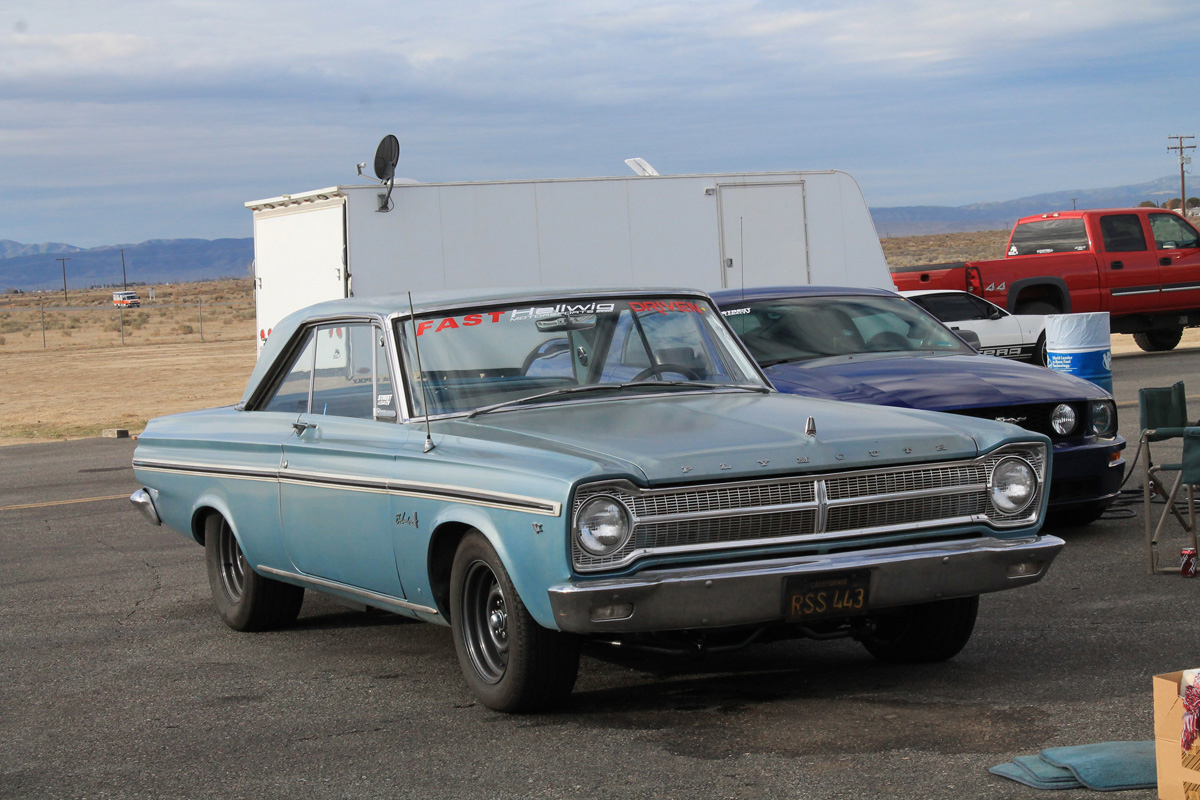 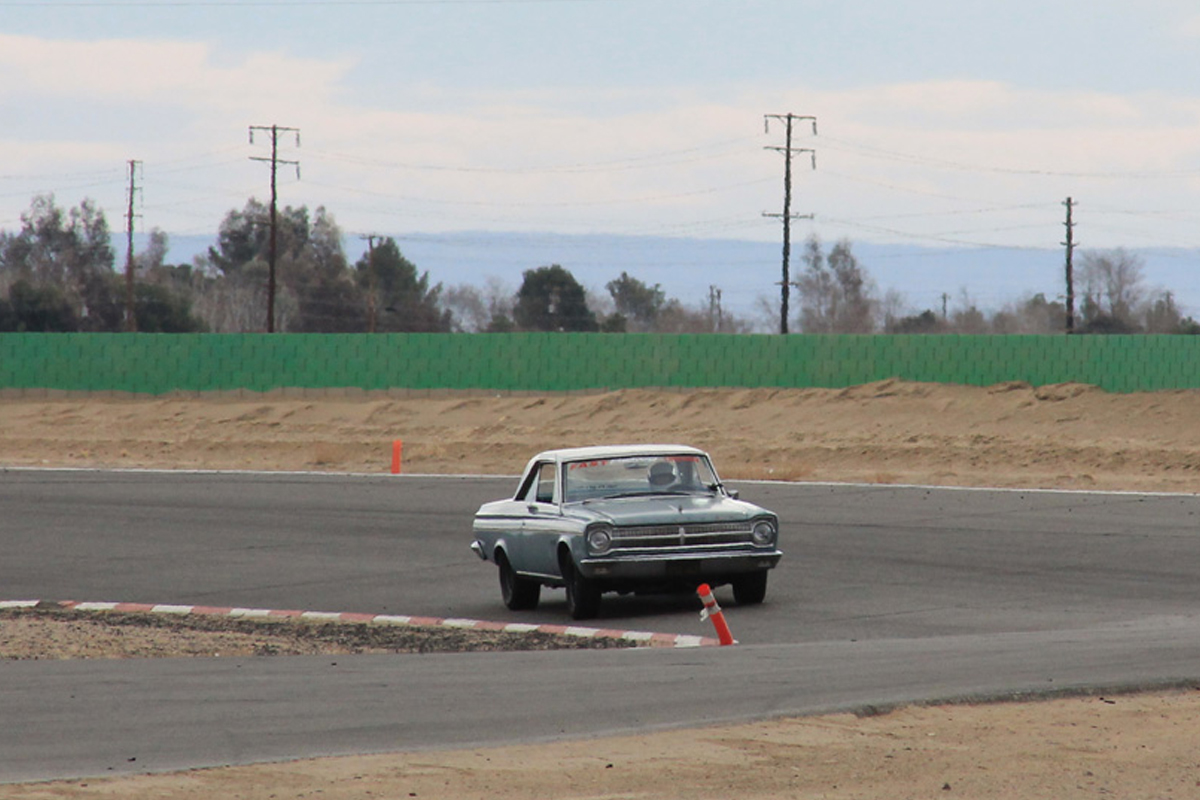 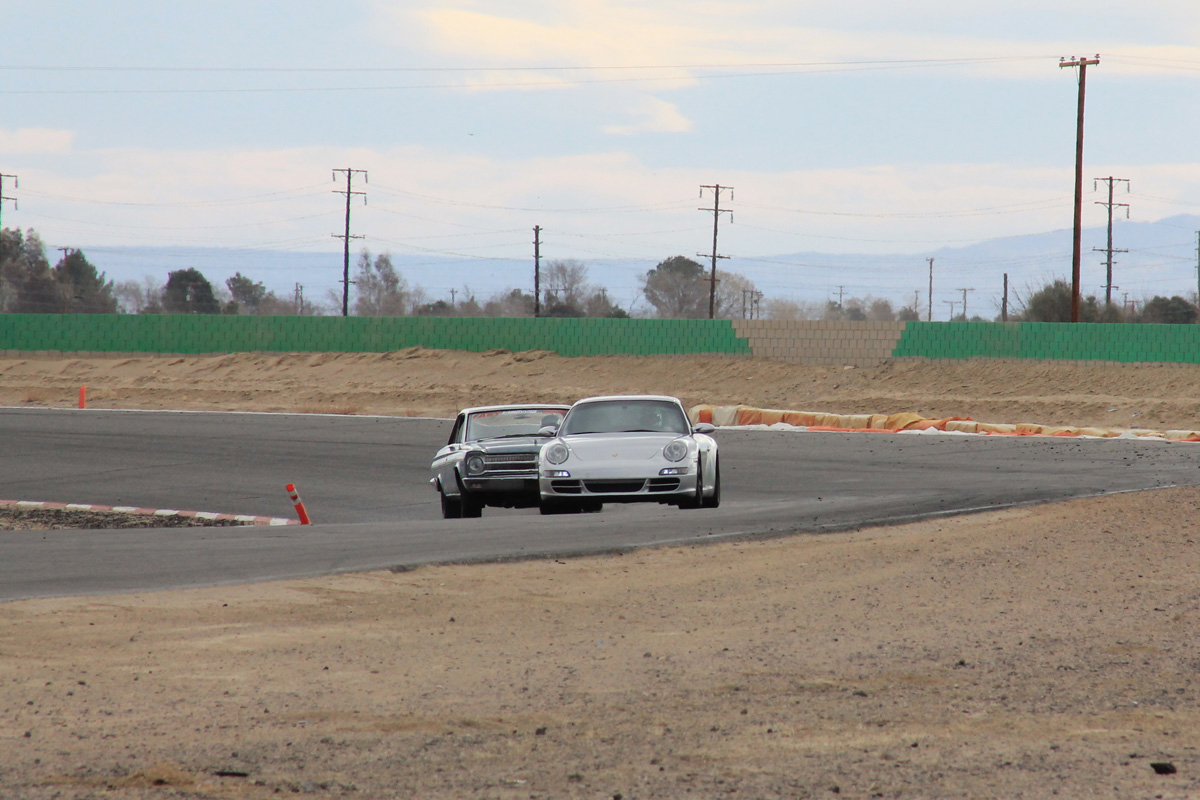 You can see in the first picture (upper, left) that the body roll was pretty extreme – that was just 30 MPH. But that changed drastically when I hit the track, and you can see how much firmer the handling is (lower, left) hitting a turn at about three times the speed, allowing me to play tag with a modern Porsche (lower, right).

The installation of the bars was simple, and the performance made a believer out of me. But I do have to blame Hellwig for one thing that they didn’t warn me about: the desire to go even faster. I was hooked, and the Belvedere became a project car with the goal of reducing my lap times, and more upgrades to the suspension, braking, wheels, and tires were planned.

The suspension on the Belvedere was a popular one for Mopar: torsion bar front suspension and the rear was hung with leaf springs. We decided to do a few upgrades after that first trip to Willow Springs, and those upgrades came from QA1. One of the few companies at the time that had Mopar suspension components, QA1 provided even more encouragement for me to go even faster. 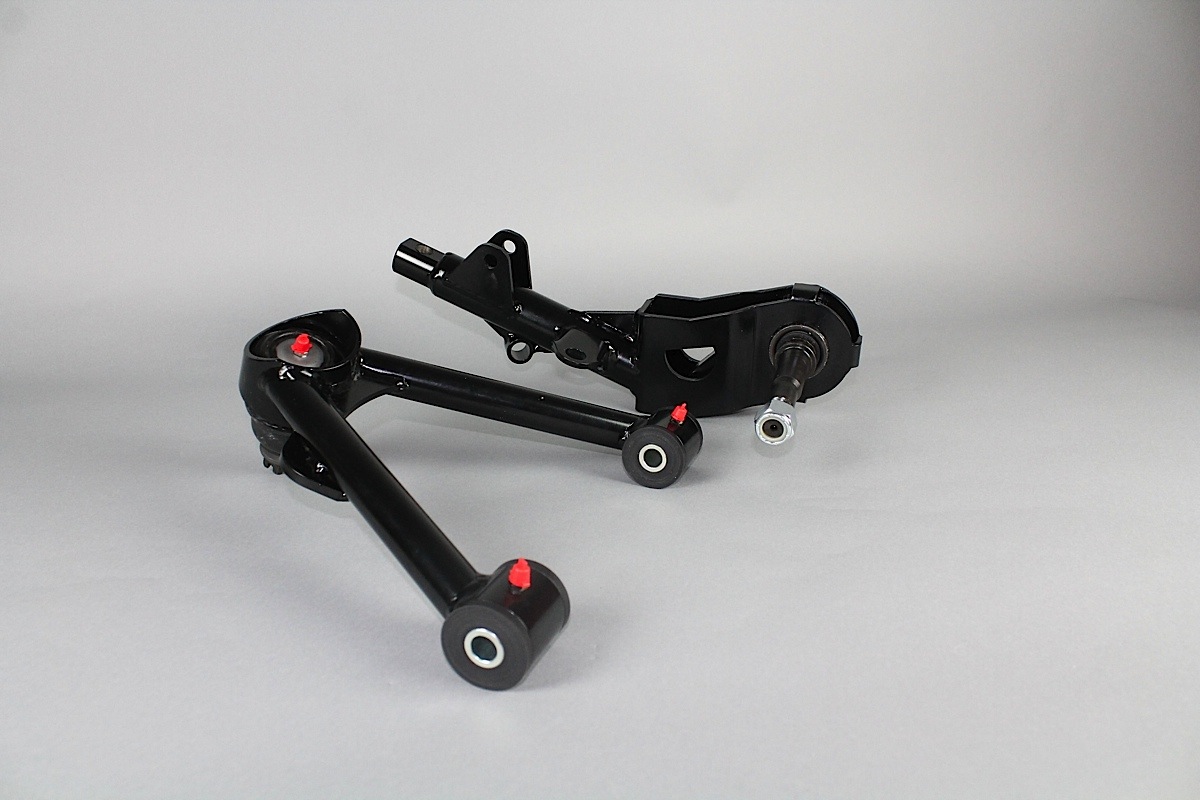 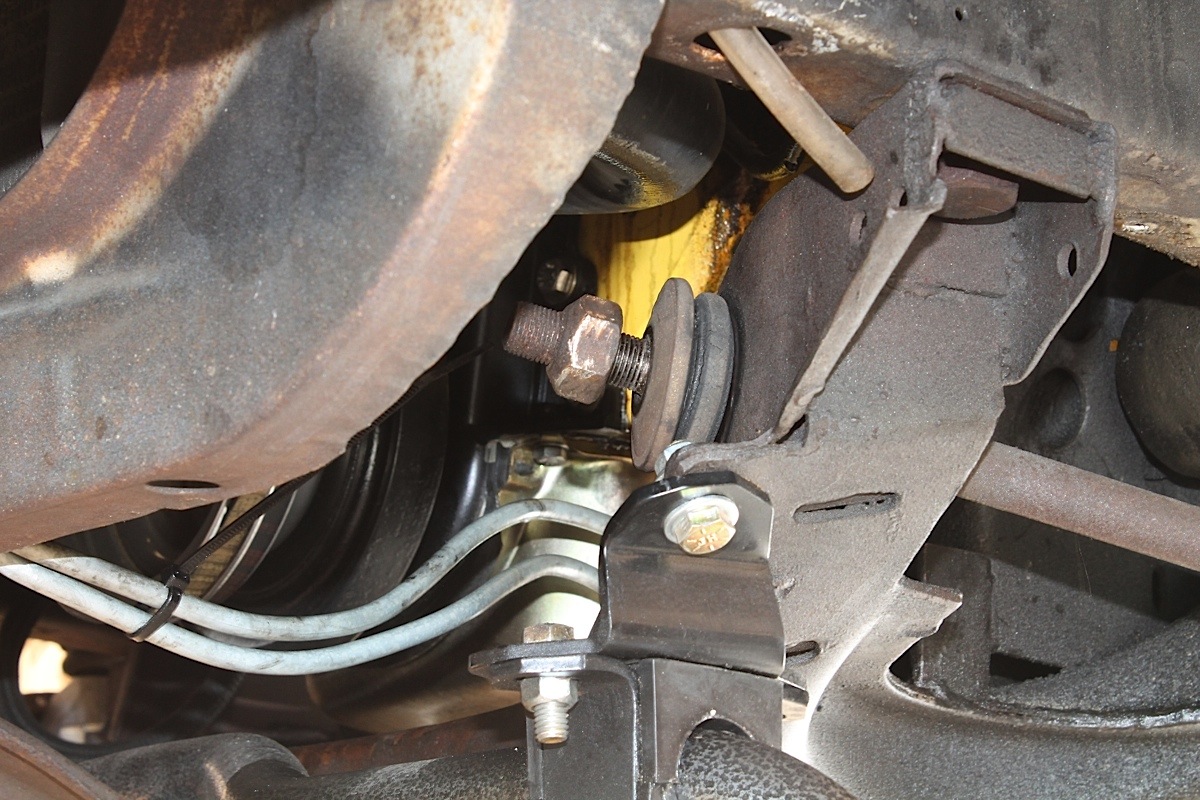 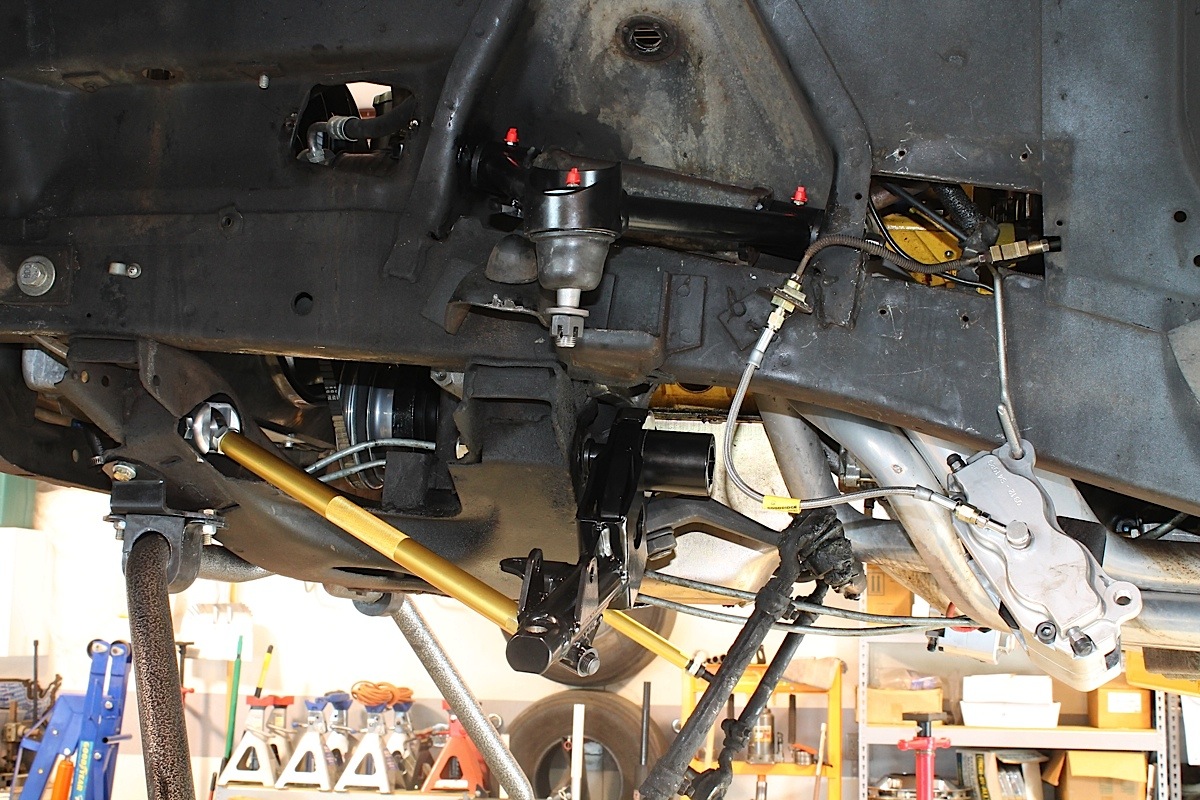 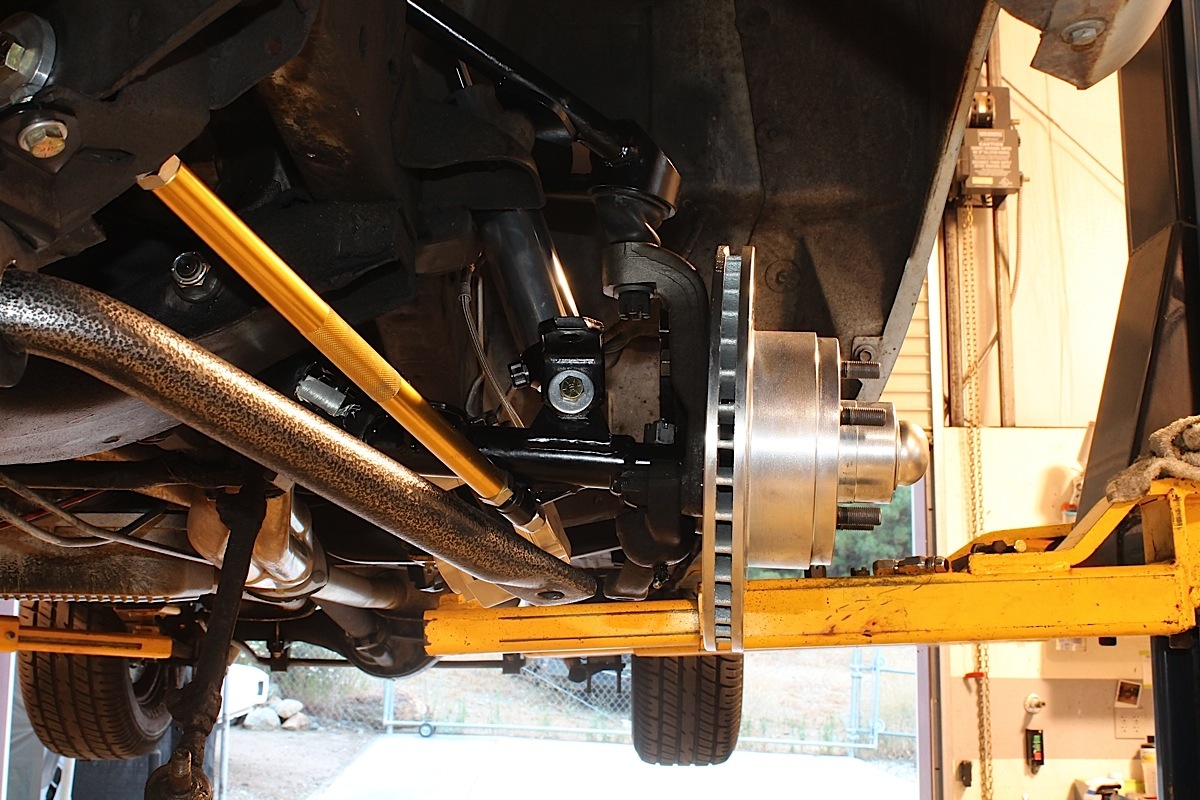 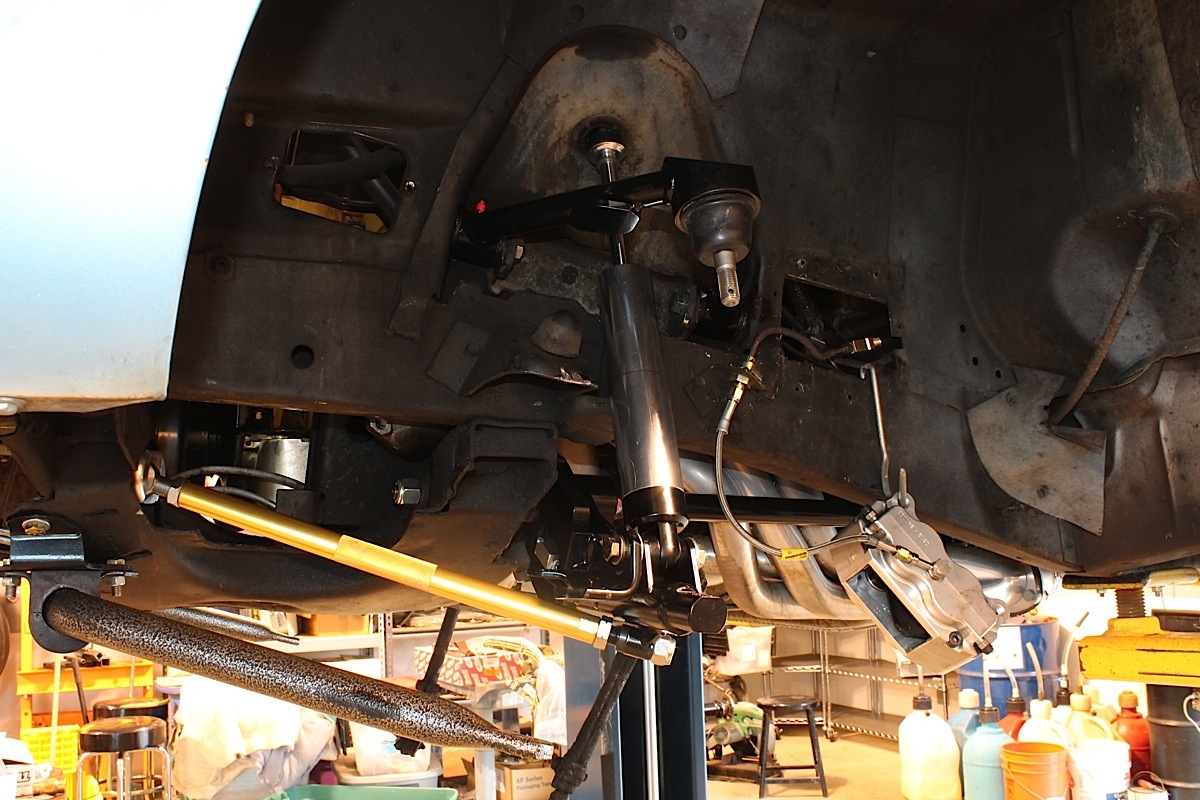 These upgrades with QA1 were more than just good looking tubular arms, we reduced the weight on the front end by a few pounds per side, and the upper and lower control arms are much stronger than the stamped steel OE counterparts. The dynamic strut rod helps firm up the suspension by eliminating the soft OE bushing.

Our decision to add QA1’s tubular upper and lower control arms meant a much stronger suspension with a little extra camber and caster built in to help the car handle better. We also added thicker torsion bars (1-inch) that we acquired from Classic Industries, and QA1’s dynamic strut rod. The OE rubber bushings on the strut rod allowed too much flex, whereas the QA1 strut rod kept the lower control arm in place.

Unlike the OE strut rod, the true function of the dynamic strut rod is not to make adjustments to the camber/caster. There are two reasons for the adjustment: first, not every car built 50+ years ago are identical in measurement; and secondly, the adjustment allows you to align the lower control arm (LCA). The LCA mounts on a single pivot bolt, and aligning the arm perpendicular to the chassis means binding is eliminated.

As the arm articulates during suspension compression and rebound, it can move slightly as the OE bushing compresses. This compression allows the LCA to shift, and binding occurs. By eliminating the soft rubber bushing on the strut rod and replacing it with a rod end, the arm won’t shift during hard cornering. This also helped us reduce our laps times the next time we went out to the track. We were on our way to make the Belvedere a formidable competitor, one modification at a time. 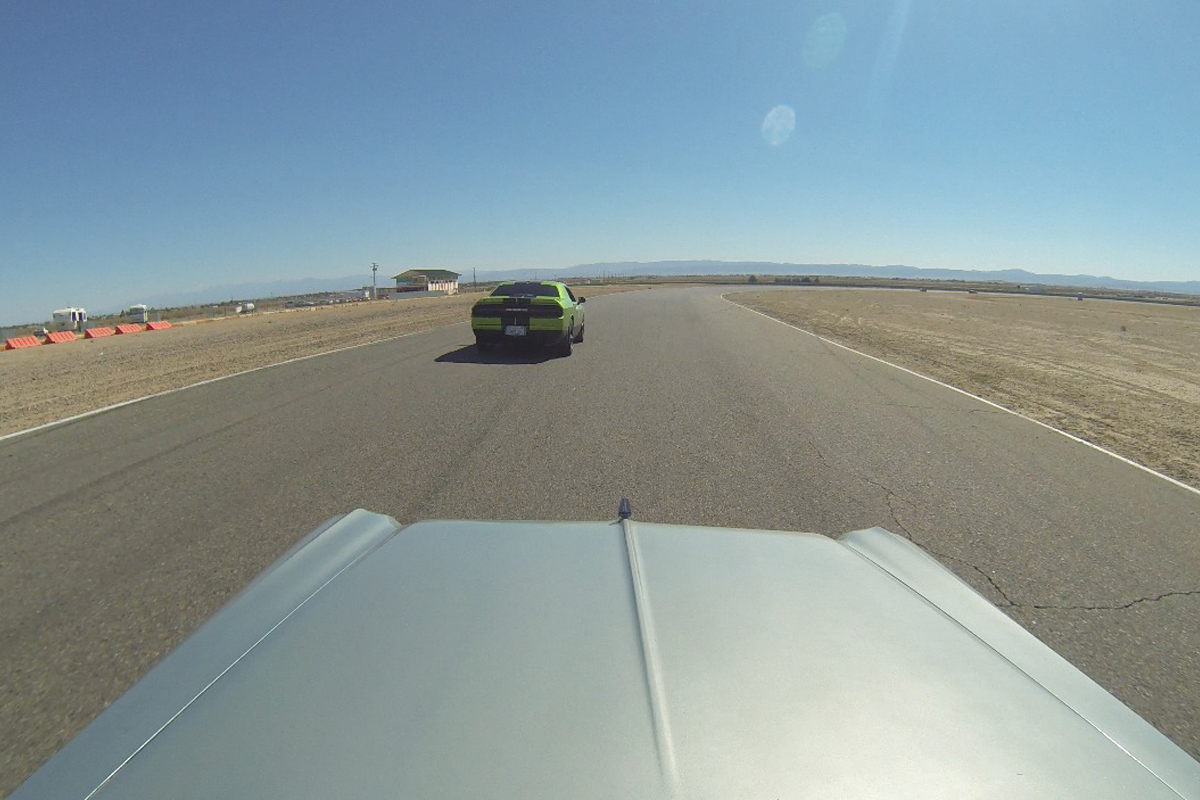