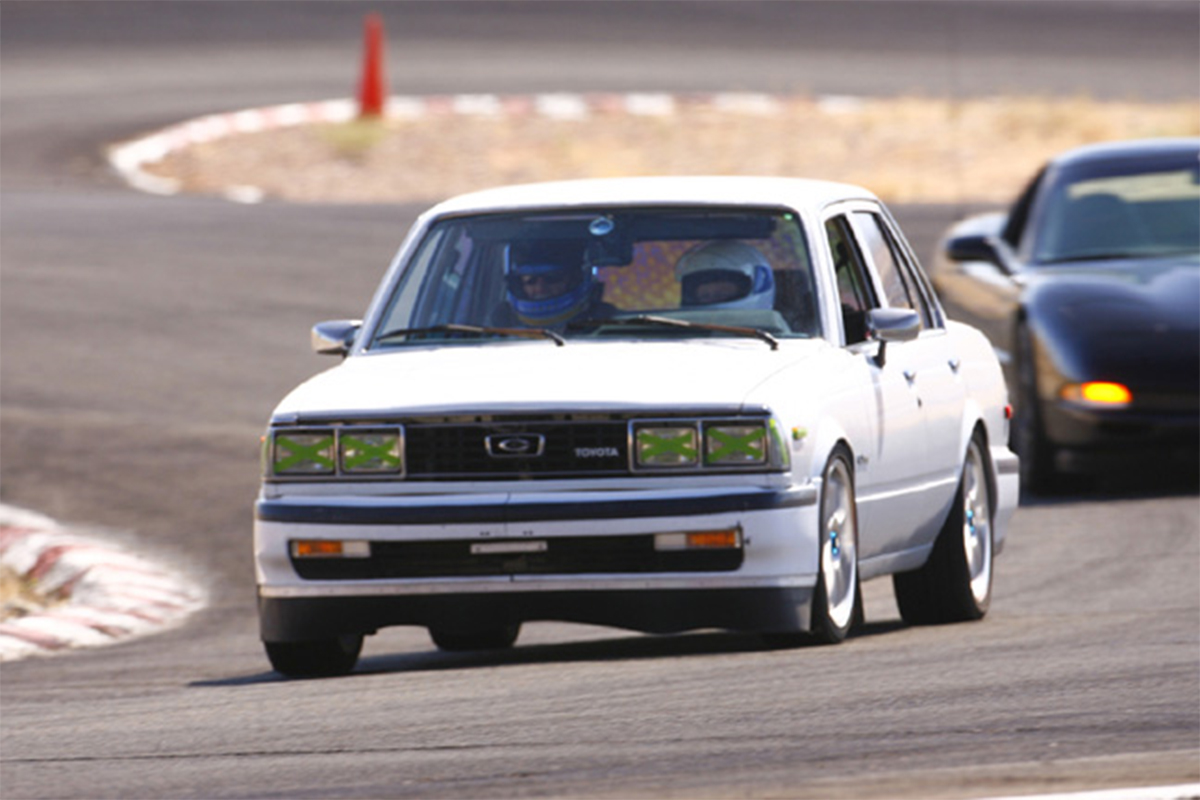 If there’s one thing about classic import cars, it’s that they’re a virtual parts bin of components. To save on tooling costs, many early imports would utilize existing parts, such as shocks, brakes, drivetrain components, etc., and it’s pretty common to find parts for your import that fit another model.

This is what we ran into with our Project Corona. Thought the proverbial ship has sailed on finding parts, there was a time when you could find just about everything you needed with an afternoon trip to the local yard.

That’s what happened when we needed to spruce up the Corona – we hit the jackpot on one trip and found two damaged cars. Between the two, we acquired a few hundred bucks worth of parts on the cheap. In that one trip, we took home all of the exterior trim and lighting, as well as a full set of interior trim to complete the car and make it presentable once again.

Then we did the unthinkable with the “family luxury sedan” that we had cleaned up: it went out to Chuckwalla Valley Raceway in Desert Center, California. It was a fun trip, but we quickly learned that the OE brakes were more meant for stopping in an intersection, not bringing the car down from near triple-digit speeds while entering a hard turn.

That led us to a search for something better, but where? A couple trips around a Toyota forum left us with the undesireable notion that we could somehow swap Mini Cooper S rotors and RX7 Calipers onto the Corona by redilling the rotos. The calipers required custom adapters to mount them to the spindle, and they’ll set you back about seven bills.

All total, it was going to be over $1,200 for front brakes that were really overkill for the Corona – and yet there was still the fact that the puny OE drum brakes weren’t much benefit. But then it happened: on a separate trip to a wrecking yard in Ontario, California, there she sat. A 1979 Corona, all propped up with the wheels off. 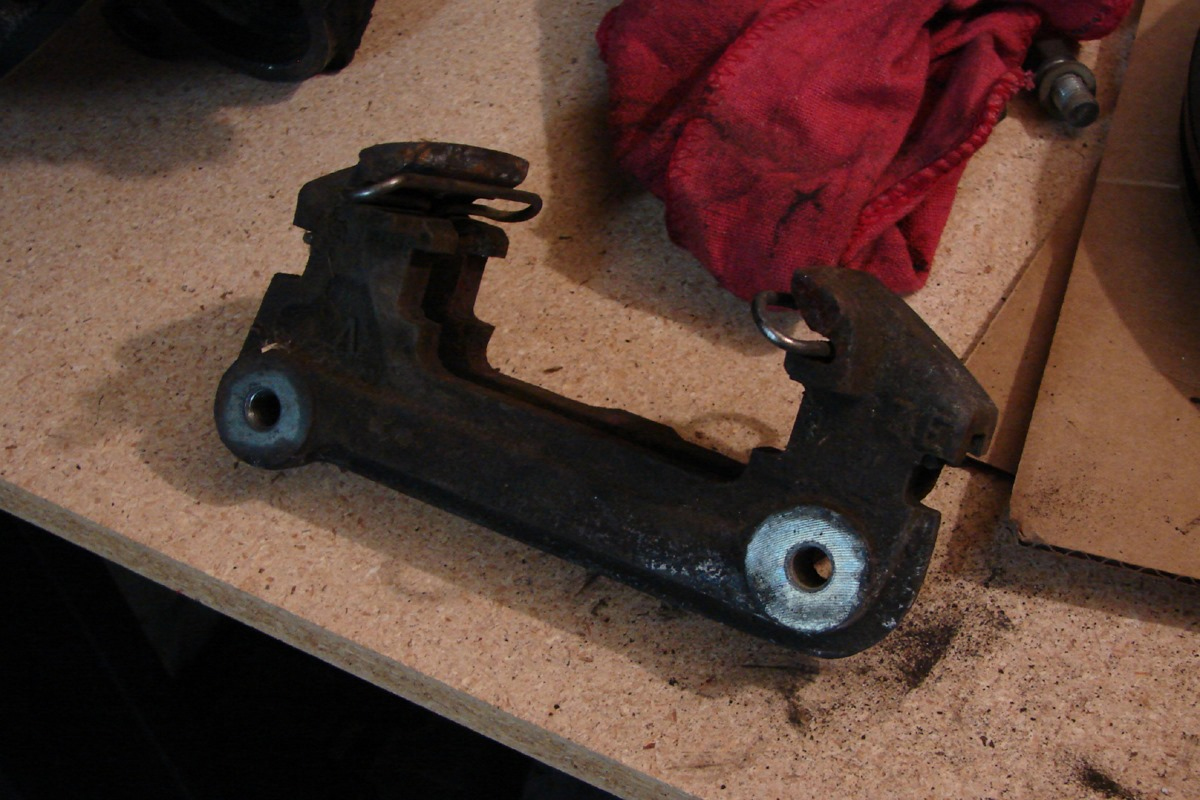 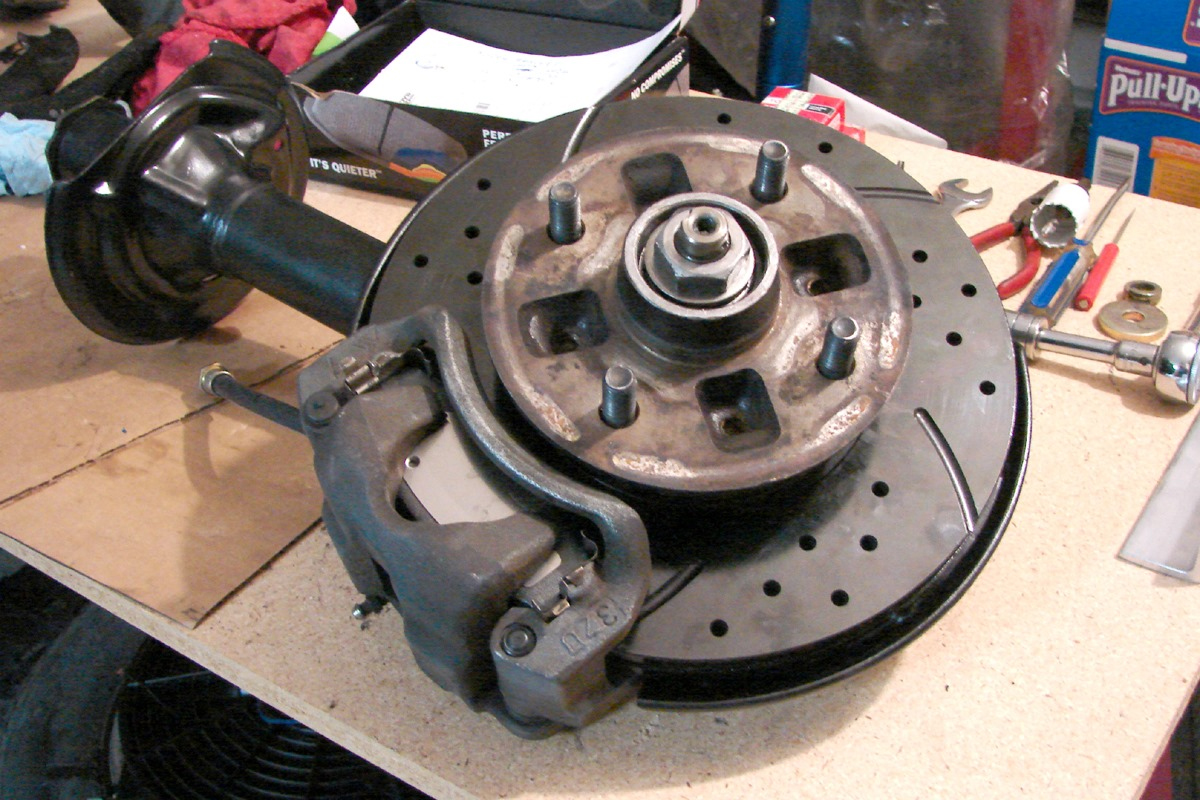 A quick test fit of the parts and a plan was concocted to put the big brake kit together, probably a first of this type.

I really didn’t need any more parts, but while I was looking the car over I got a wild hair and glanced over at the 1984 Cressida across the aisle. If you weren’t aware, the OE front rotors on the Corona – much like the 1978-81 Celica – were solid, and they warp a little easier. The Cressida sported a vented rotor, and that gave us an idea.

We already knew that the later gen Celica (1981-1985) font calipers weren’t going to work, neither would the struts. But after pulling apart the Cressida front brakes, it was discovered that its calipers had the same bolt pattern as the Corona. It was no surprise that the front hub was the same size as the Corona (which is the same hub & bearing as the 1979-1981 Supra). 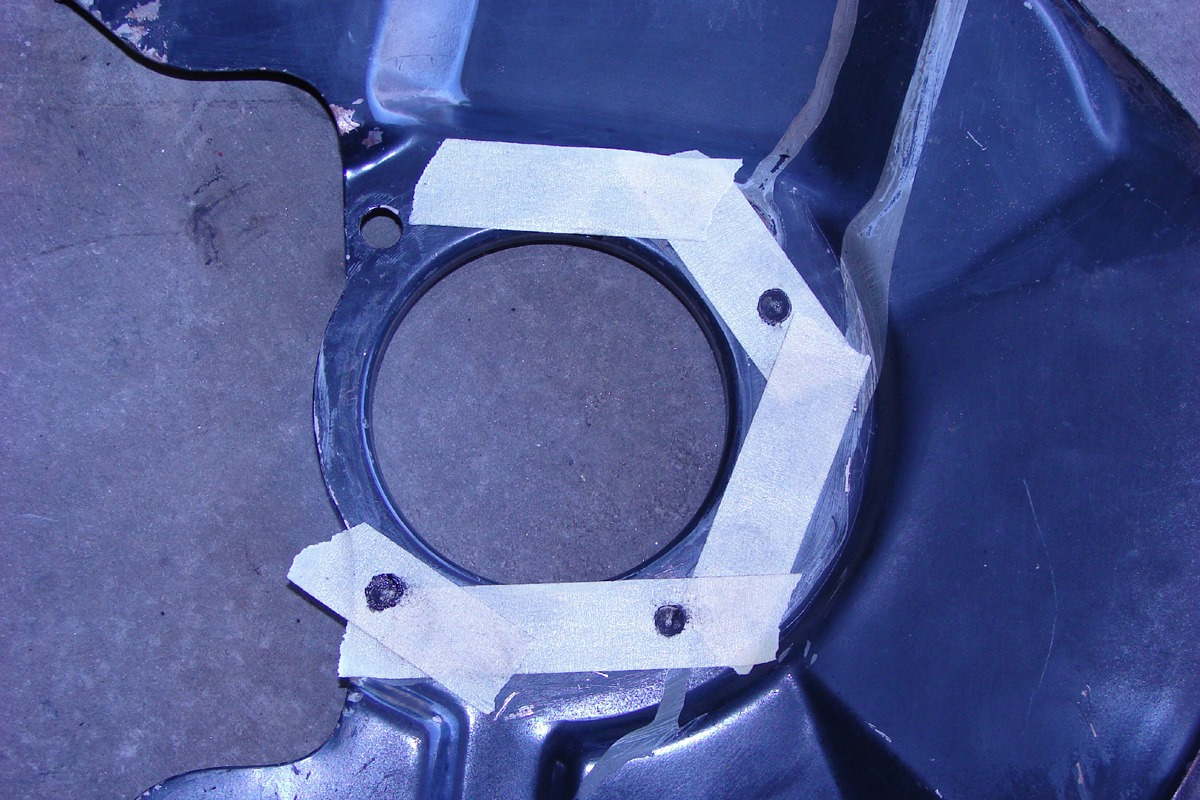 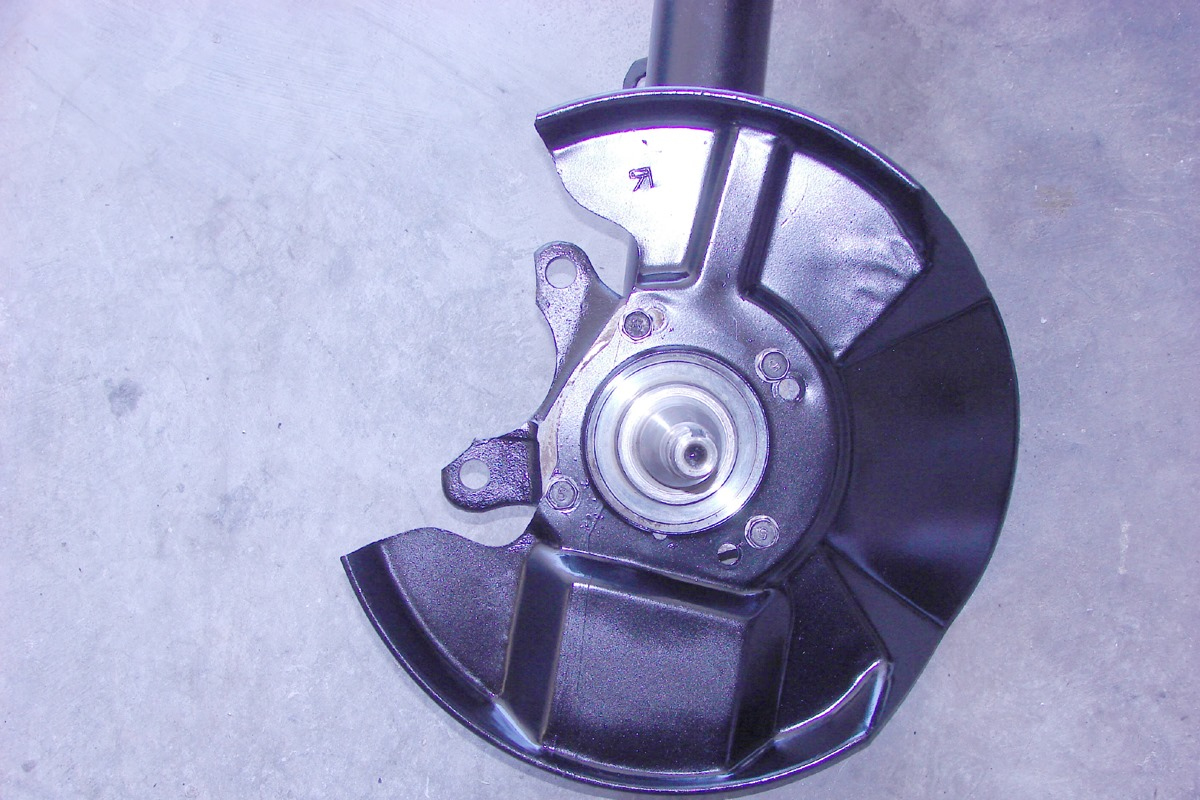 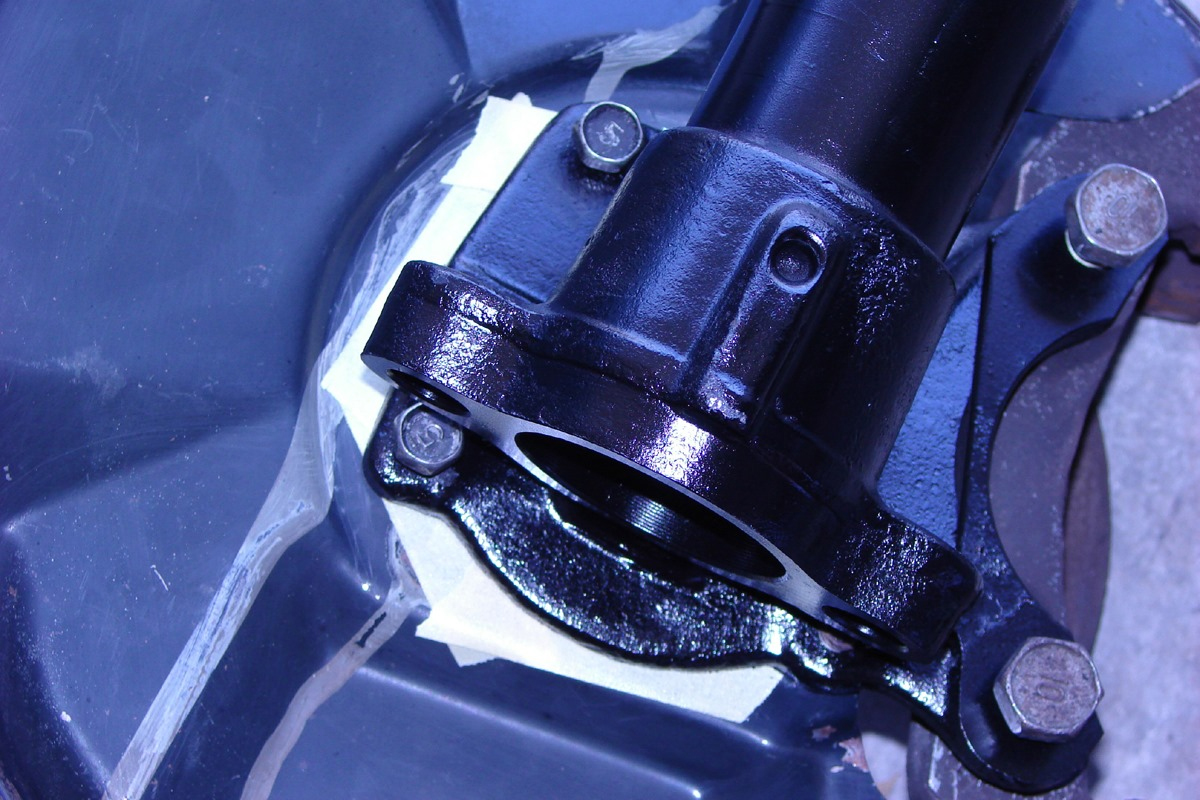 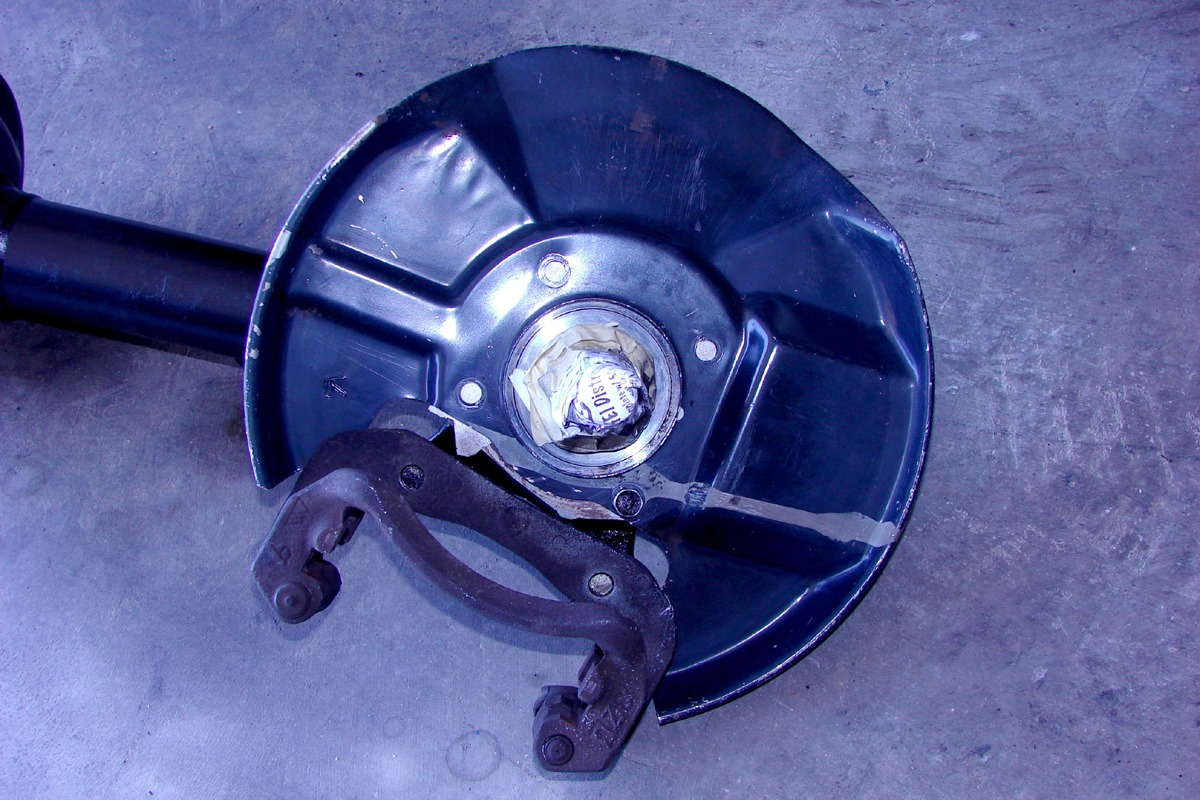 The splash shield for the Cressida was a little nicer, but the pattern was off a little, so a couple of extra holes solved that issue.

After bolting it all together, it was discovered that the brake rotor from the Cressida was too small in diameter compared to the mounting locations for the Caliper, so the pad sat off the rotor – and that’s not good. Then we looked down the aisle and saw a 1983 Celica GT, and the cogs started turning again.

The hub & bearing were about the same size as the Corona, and after pulling the rotor off and comparing it, we discovered that the diameter was a bit larger than the Cressida, and a perfect fit for the Corona with its Cressida calipers. Spacing was going to be an issue, but that was easily solved with some scrap aluminum from the garage, and a set of spacers were made. 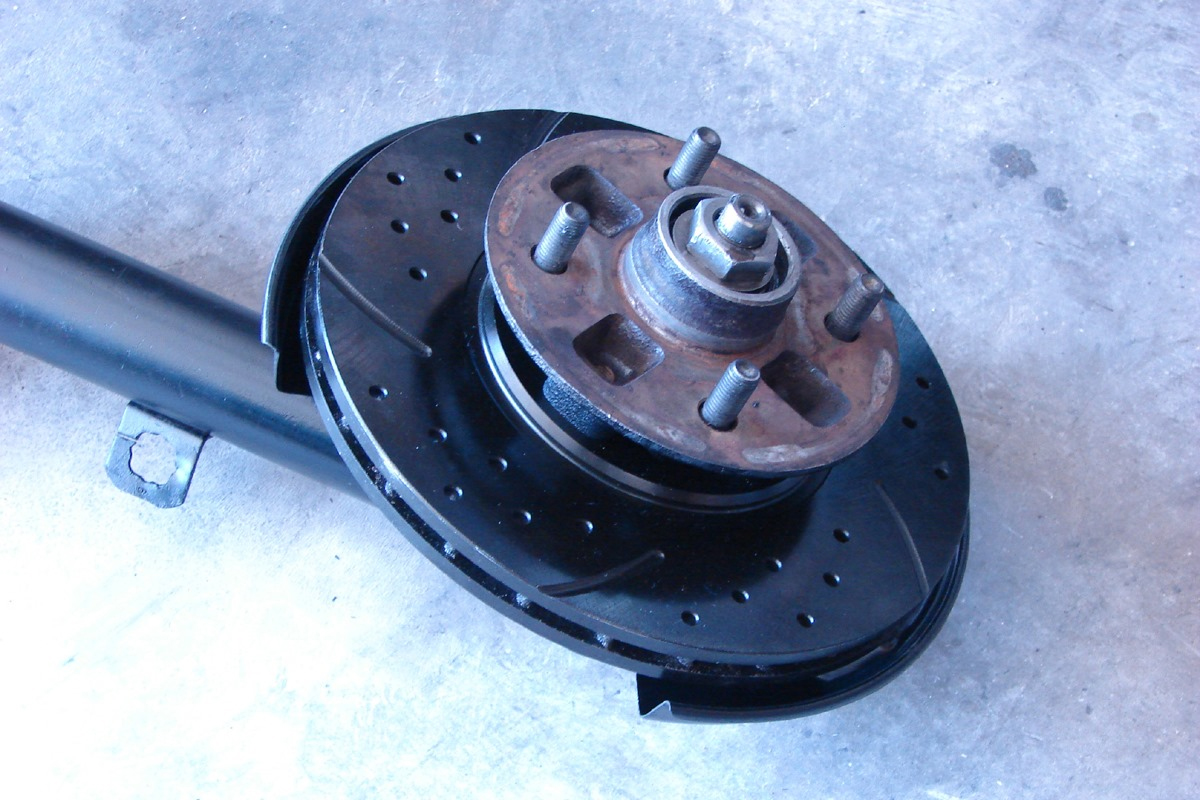 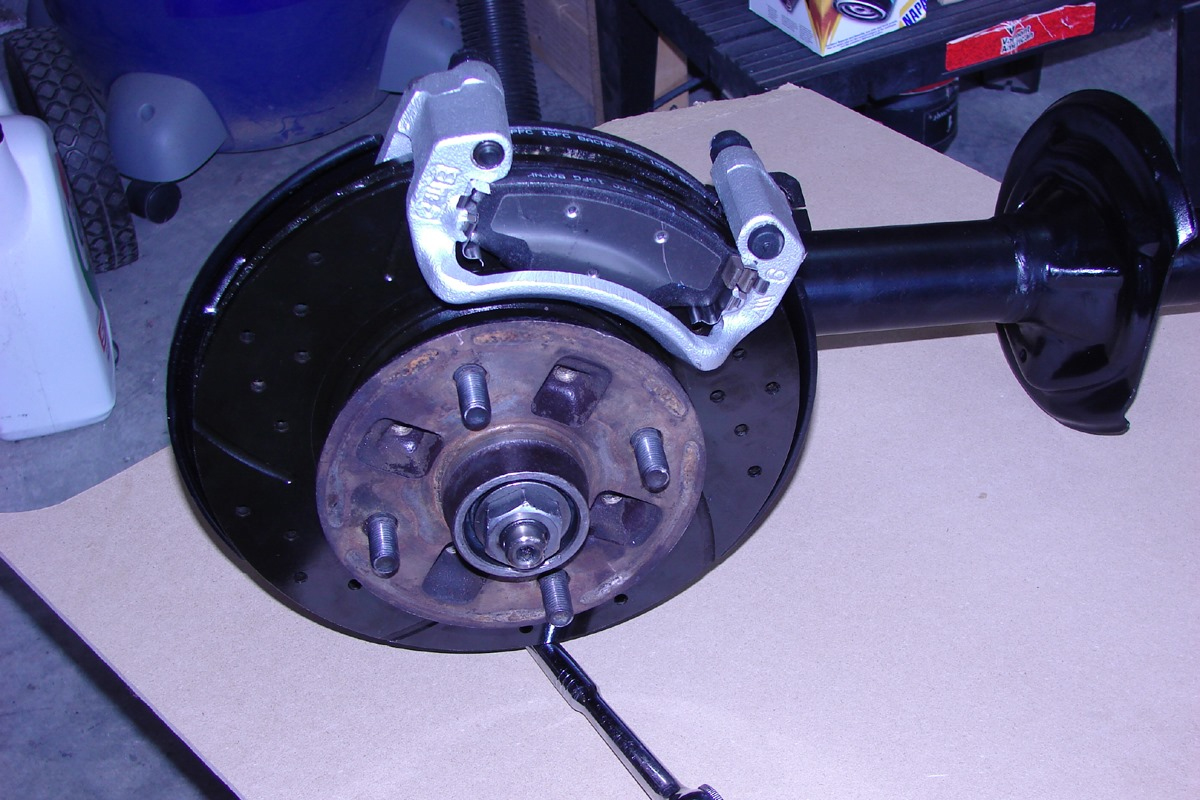 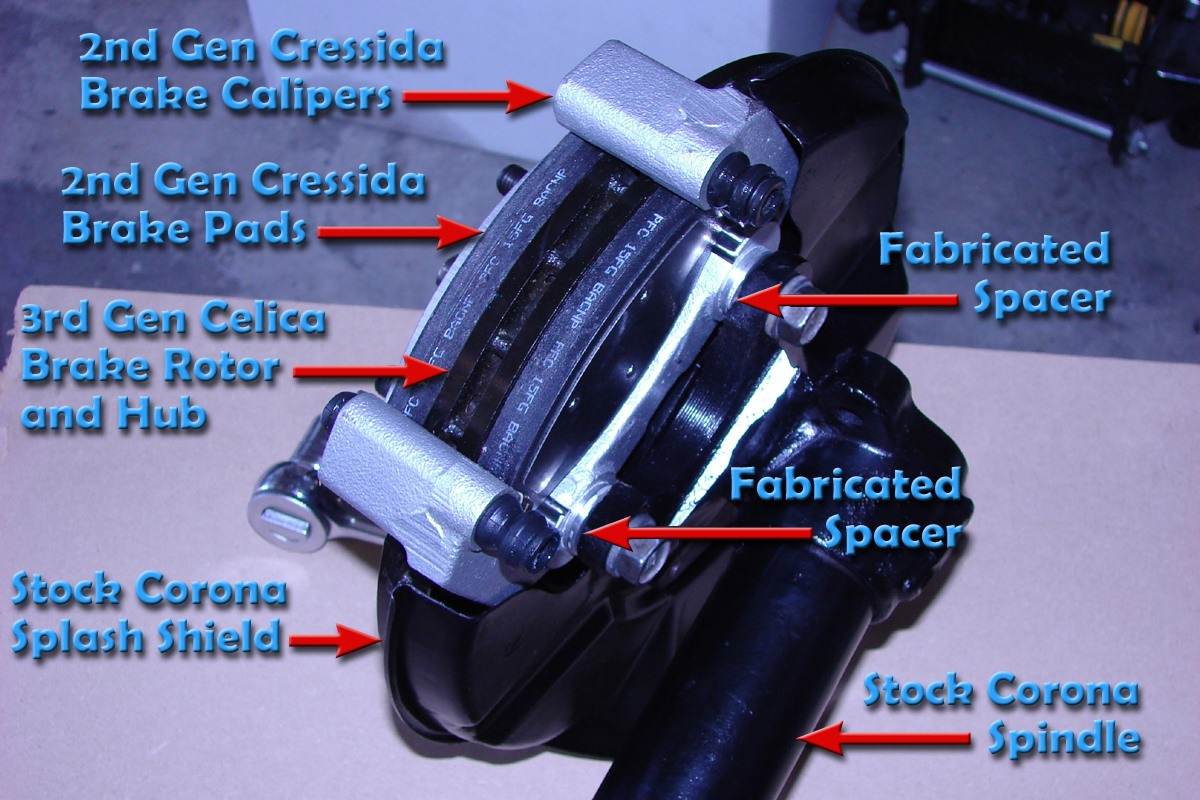 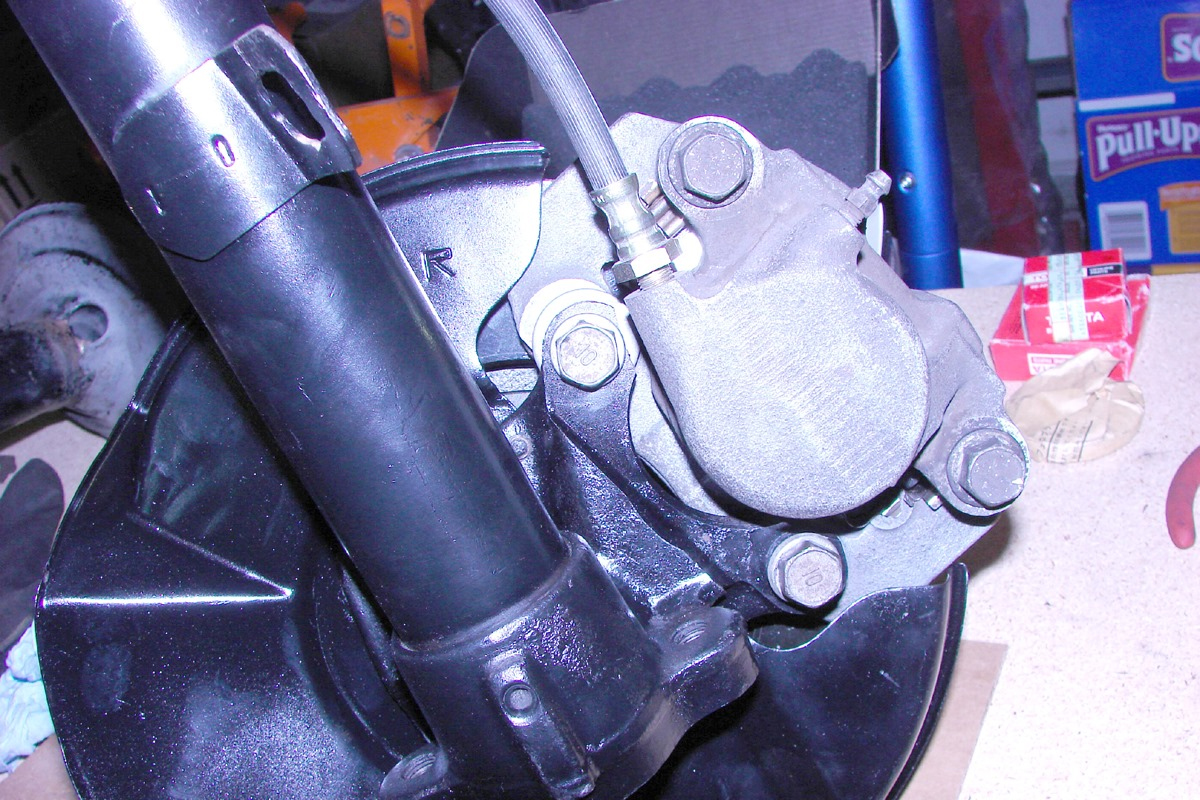 The caliper bracket for the Cressida was threaded, as was the Corona spindle where the caliper mounts. The simple solution was to drill out the spindle and allow the bolt to slide through and thread into the caliper. It wouldn’t work the other way around, so this was the only solution.

After fitting all the parts from the yard, doing the measuring and figuring out how to put it all together, that still left us with the rear drum brakes. But we had another trick up our sleeve, and we were pretty sure it was going to work. 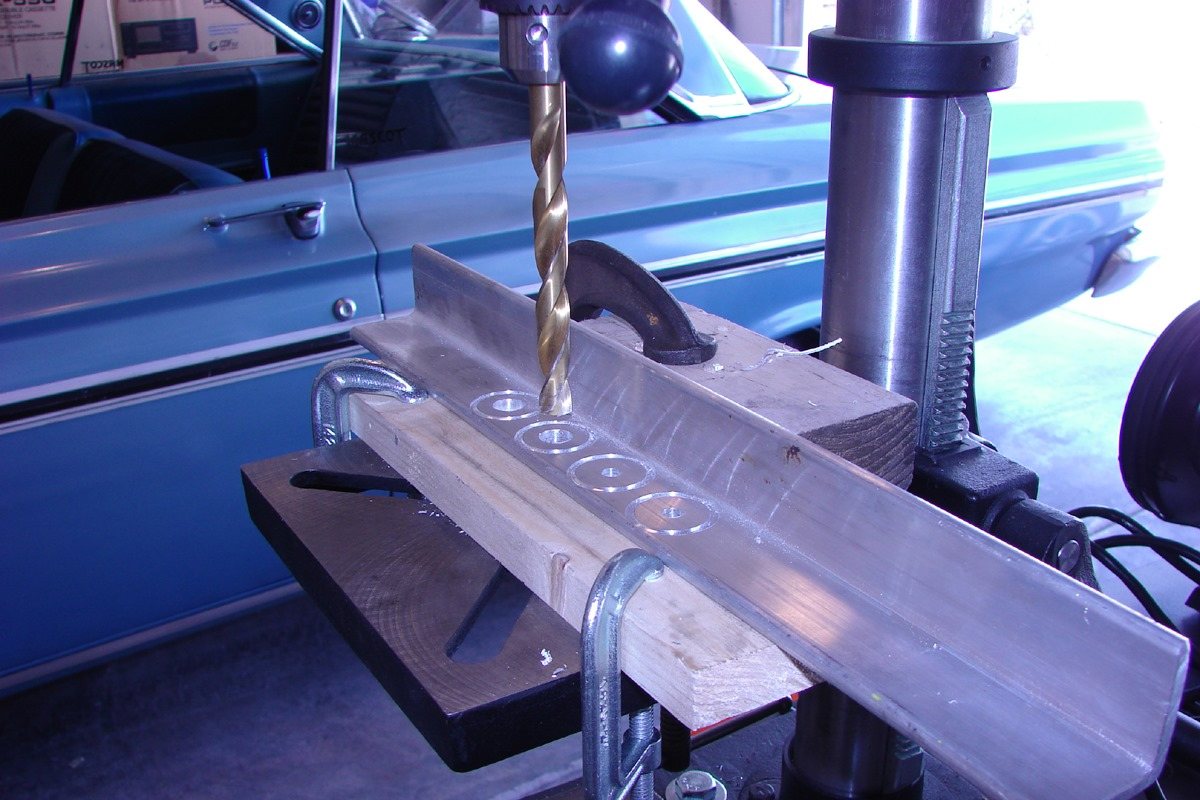 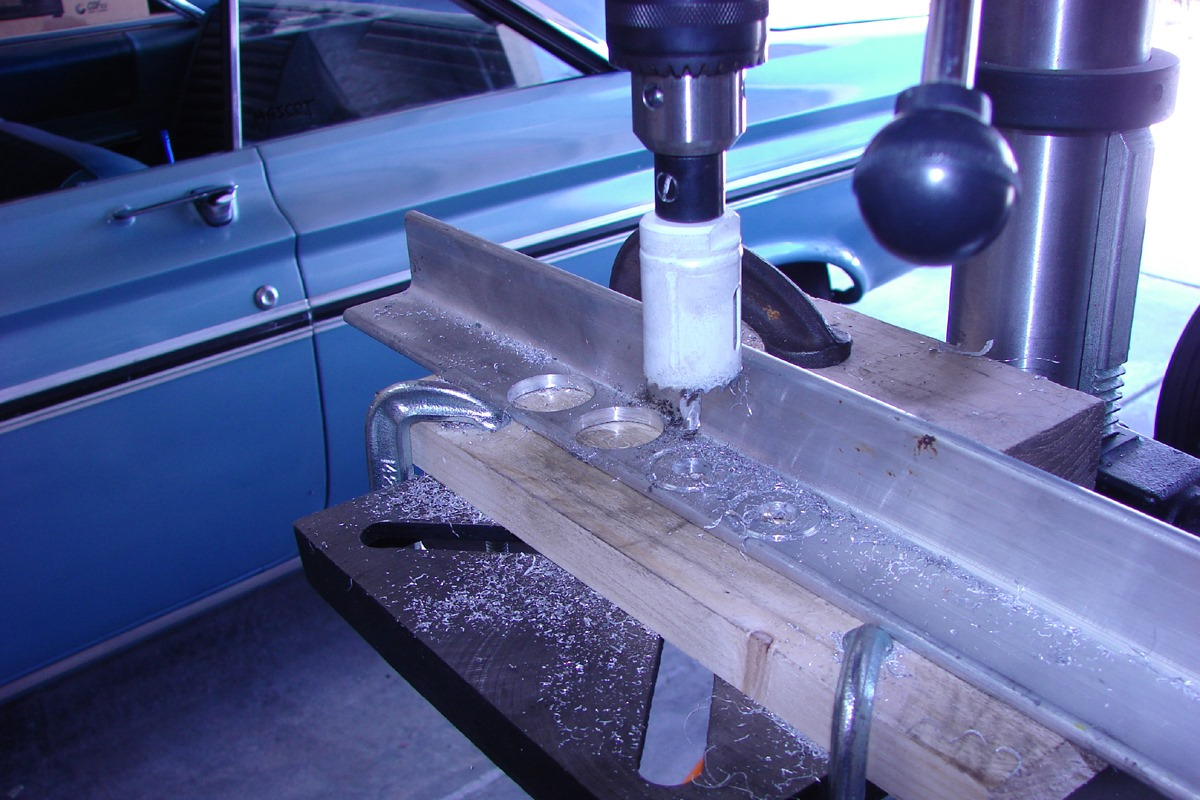 Fortunately, adding a couple of homemade spacers to each caliper did the trick. I started with a hole saw to start the pattern in the aluminum, then drilled the larger center hole, and finished up with the hole saw again to complete the spacers.

From a previous project, we had a 1981 Toyota Celica Supra rearend, which was equipped with disc brakes. We made the wise decision to also pull the parking brake and brake cables while we grabbed the rearend, and after a little bit of measuring and parts catalog checking, it was discovered that the Supra rearend was a direct bolt in for the Corona, with the only requirement being a swap of the parking brake lever and cables.

With the entire braking system figured out and dialed in, it was time to pick up some new components to replace our used mock up parts from the wrecking yard. Remanufactured calipers were fairly inexpensive, but we wanted new ones so we headed over to Brake Performance to acquire new rotors all around, and new calipers.

It probably seemed like an odd order for them to fill: front rotors for a 1983 Celica, front calipers for a 1984 Cressida, and rear rotors and calipers for a 1981 Supra. That’s right, none of the brakes that we ordered were for a 1979 Corona – the car we were working on. 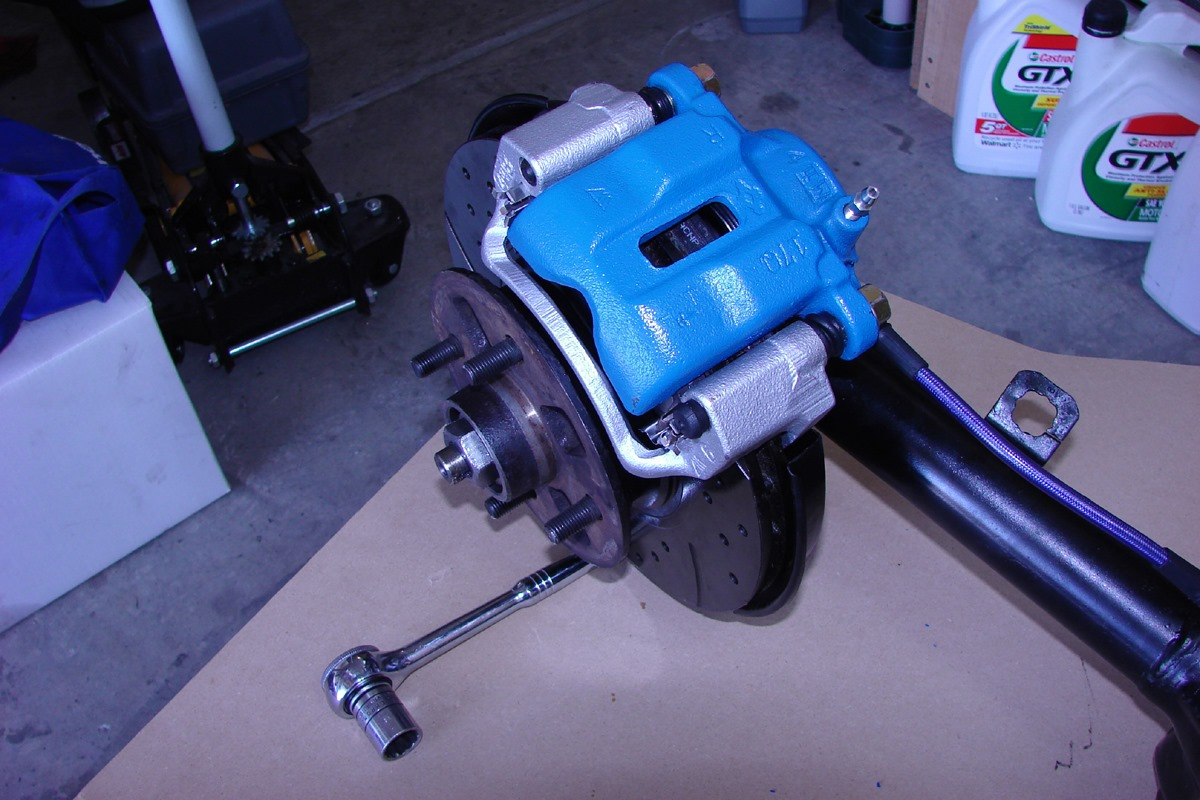 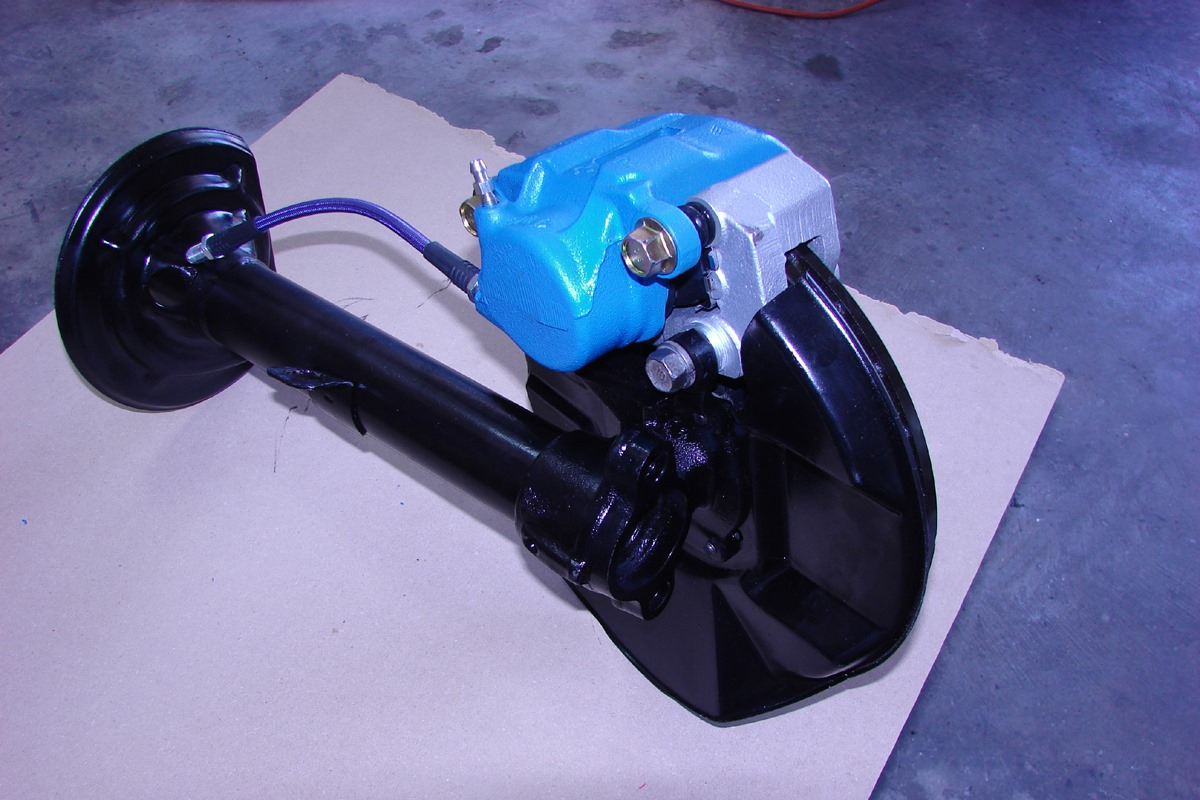 It may not look as great as a set of billet, 4-piston calipers, but it’s functional and more than enough for this small car. Sure you can spend more, but why?

With all the new parts installed, it was time to test everything, and for that we made a trip out to Willow Springs International Raceway, and put the brakes to the test on Big Willow. It’s a bit of a large track for the Corona, but we did well and didn’t experience any brake fade at all during our weekend racing.

It’s not every day you can find an affordable and functional solution by playing around with parts like we did with model kits as kids, but this whole setup, front and rear, was one that could be had for just a few hundred bucks, far less than the cost of the alternative. And the best part is that it all works like it’s supposed to – even though it was a bit of a crapshoot. 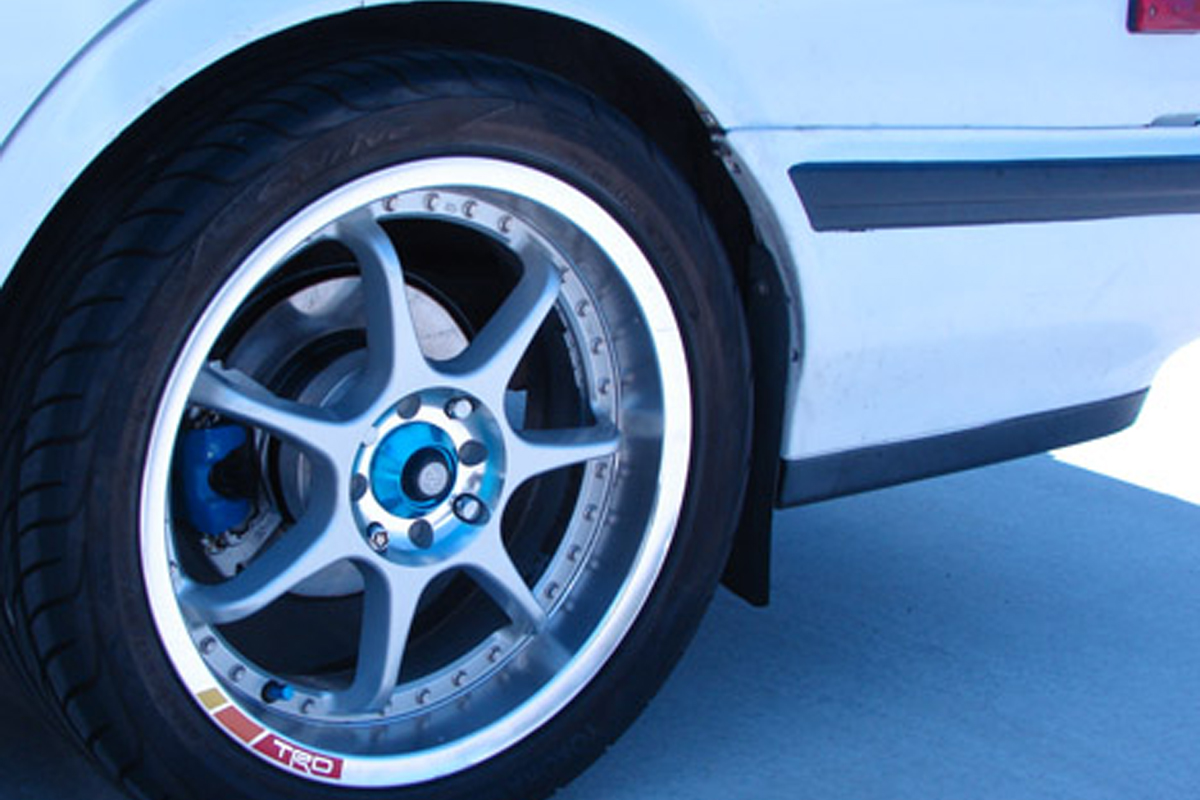 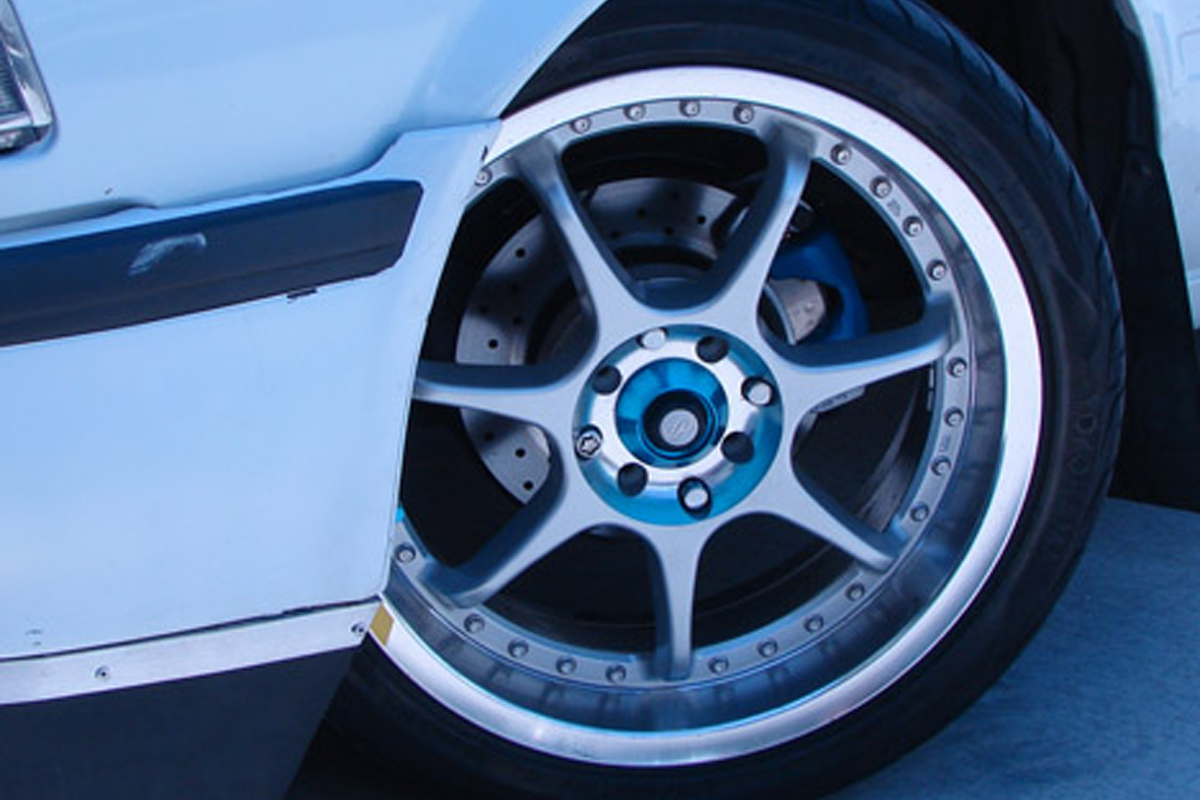 To the trained eye, there’s something different about the brakes on the Corona, but it’s such an odd car to see these days that few know what it is, or that it didn’t come with disk brakes all around.