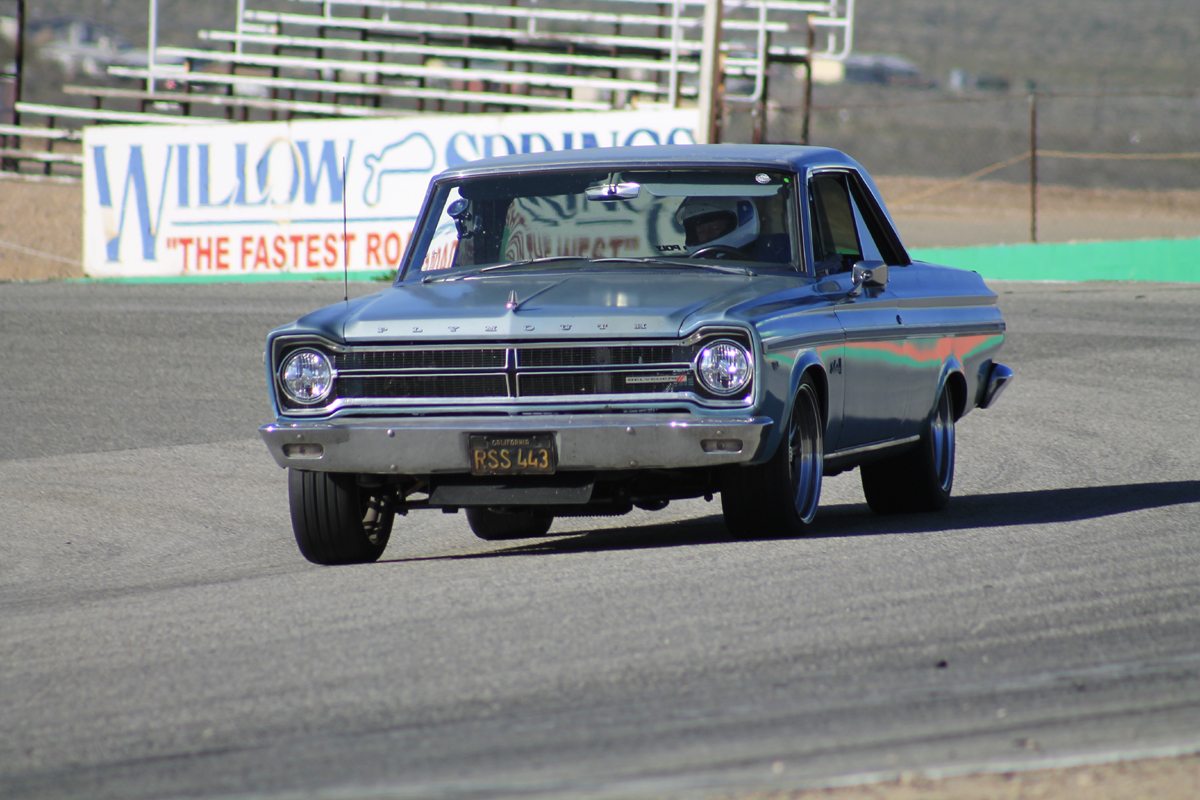 When it comes to classic Mopar Muscle Cars, steering is a bit of a sore spot with some owners. The way the old A, B, and E body cars are set up, the engine is actually shifted slightly to the passenger side to accommodate for the huge, clunky steering box. Add headers, or a big-block, and you’ve got little room to work with. Our Plymouth has the Poly 318, a rather large, heavy engine to begin with, and that meant very tight quarters.

Racing the Belvedere at the track and a few autocrosses in town meant that we worked our power steering a bit more than we did at the local cruise night. Even with a claimed “rebuilt” unit found on eBay, the steering was sloppy, and the slightest adjustment to remove the slop caused the steering to stick a little, and not return to center. It was time for an upgrade, and this time we weren’t going back to eBay.

There are a couple of options that can be considered when it comes to the power steering box, and one that’s fairly popular with classic Mopar owners is Firm Feel. They’ll rebuild your existing steering box on an exchange basis, firm up the steering feel, and ship it back to you. Many are happy with that route, but there was an important detail that Borgeson Universal’s Jeff Grantmeyer expressed to me during our conversation about the unit he provides.

Jeff said, “A rebuild is fine for a driver, but you’re still using 50 year old technology.” That logic makes sense; why spend the money for a rebuilt unit when you’re still using what they had to offer back in the 1960s? A better choice – which I found out was rather specific to Mopars – was the brand new steering box from Borgeson. Although it’s not a genuine Mopar steering box, the advantages far outweigh that minor detail. If you’re aiming to keep everything looking factory, Firm Feel is a good option; if you’re looking for something modern – without reconfiguring your entire steering system as with a rack and pinion – then Borgeson is the direction to take your steering.

Borgeson starts with a brand new unit from a modern vehicle, and they re-spline the pitman shaft to match the factory pitman arm. Then they cut off the existing mounting brackets and weld on new brackets to fit the Mopar K-member. What you end up with is a brand new gear that uses modern technology and valving, not antiquated parts from decades ago.

If you’re like me, you probably read the line above in the voice of our favorite pitch-man from the past, Billy Mays. And there is more, much more. In addition to the modern steering feel and componentry in this Borgeson steering box, you’re going to lose about 13 pounds and gain some much needed space between the engine and the K-member. This new unit is smaller and lighter, and after installing one in A, B, and E body cars – with both small- and big-block engines – the difference is worth it.

One other issue that came up with the Borgeson steering box was the price. It was initially a little over $700, and Grantmeyer heard the pleas from owners who wanted a better price. So he went out and found another steering box to use, and not only was he able to drop the price about $100 over the older box, but he also found a box that was slightly smaller and lighter than the original.

With a smaller steering box, you might be inclined to ask, “will the stock steering shaft fit?” That’s a good question, and the answer is both yes and no. But Borgeson didn’t leave you hanging, nor did our friends at Bergman Auto Craft, a distributor for Borgeson and a bit of a Mopar nut as well.

On the Mopar page at Borgeson Universal, there are a few options and choices for steering boxes, which includes the 1-1/8″ and 1-1/4″ pitman shaft (typically early and late design) as well as a Coupler Kit to mate your column to the new steering box. This requires a little cutting of your stock steering shaft, and Borgeson even includes the drill bit needed to drill the holes to mount the coupler.

If you’ve ever tried to remove the large factory steering box, you’ll know that raising the engine can’t be avoided. Access to the three mounting bolts is difficult, but removing the clunky factory box without removing the torsion bar is just this shy of impossible without doing some damage – mostly to your knuckles.

In every case where I’ve swapped the steering box with the engine in place, we unbolted the driver’s side mount and raised the engine a couple of inches after removing the manifold/header to access the steering box. Once the factory box was removed, we could actually put the engine back in place and we had room for installing the new, smaller Borgeson unit. However, since the engine was already supported we typically left it raised until after installing the new box. 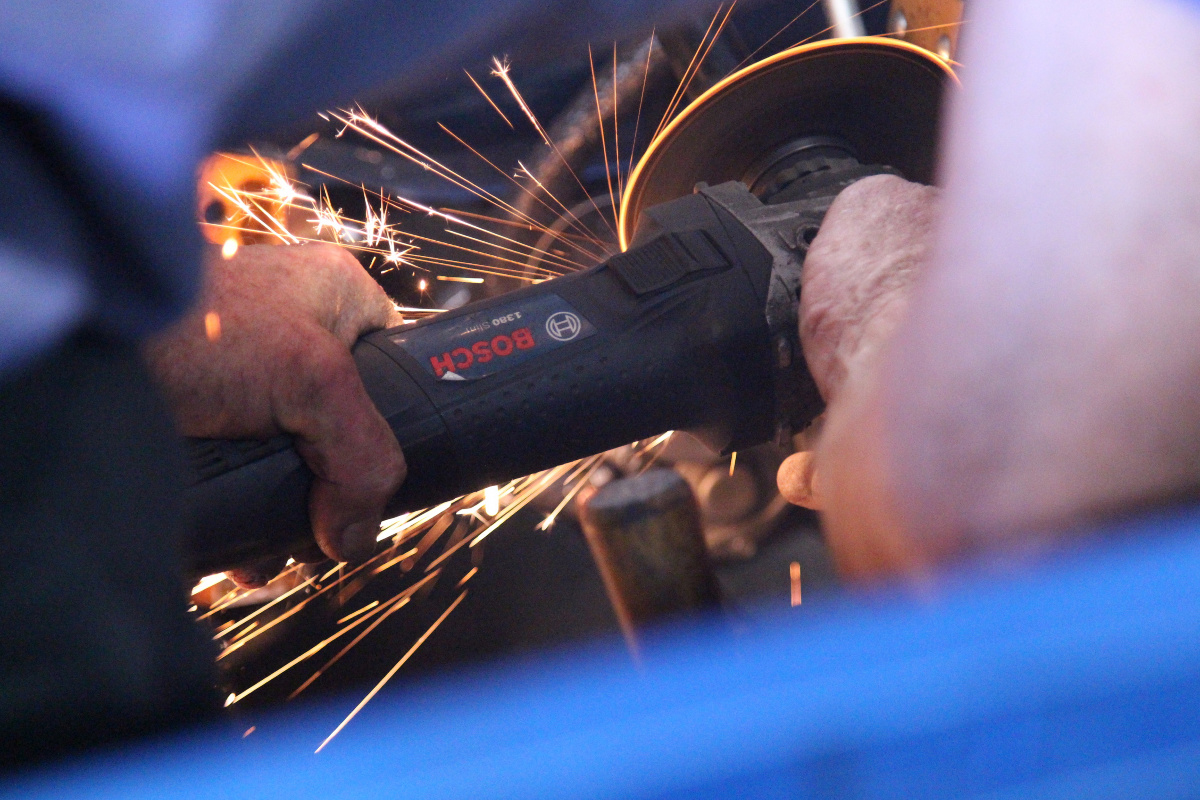 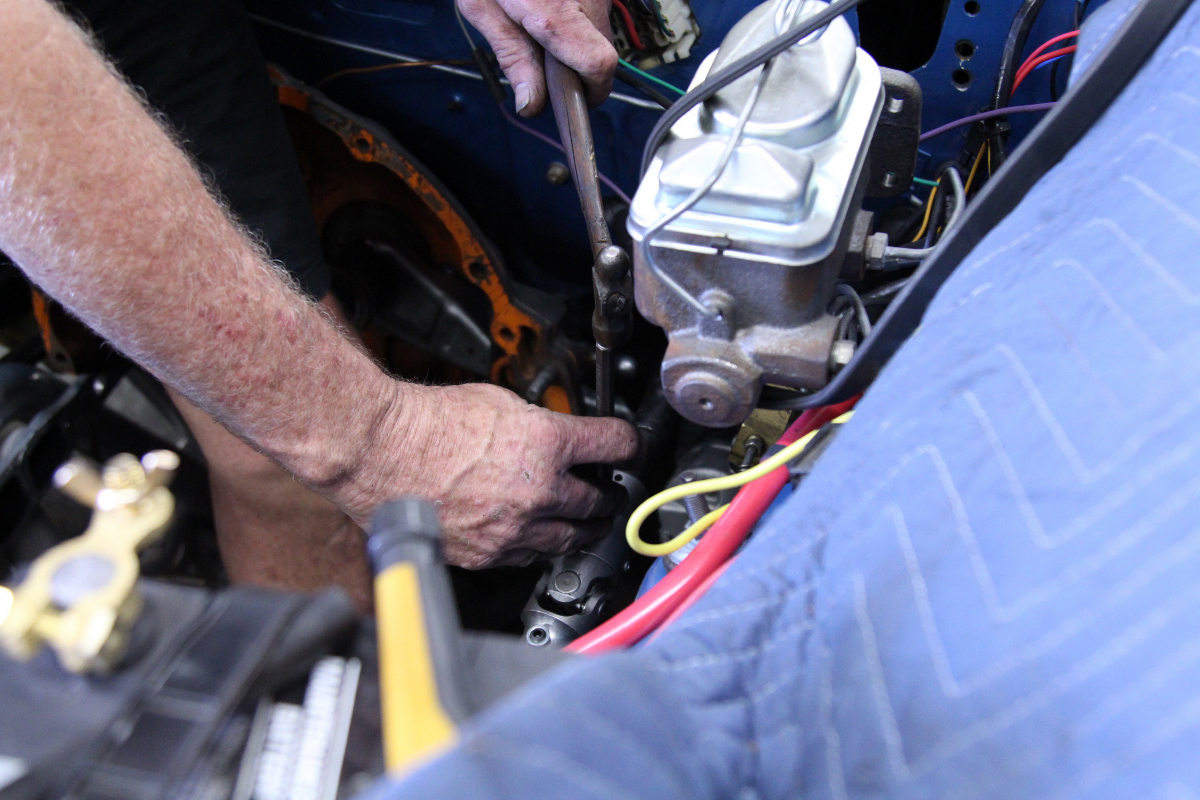 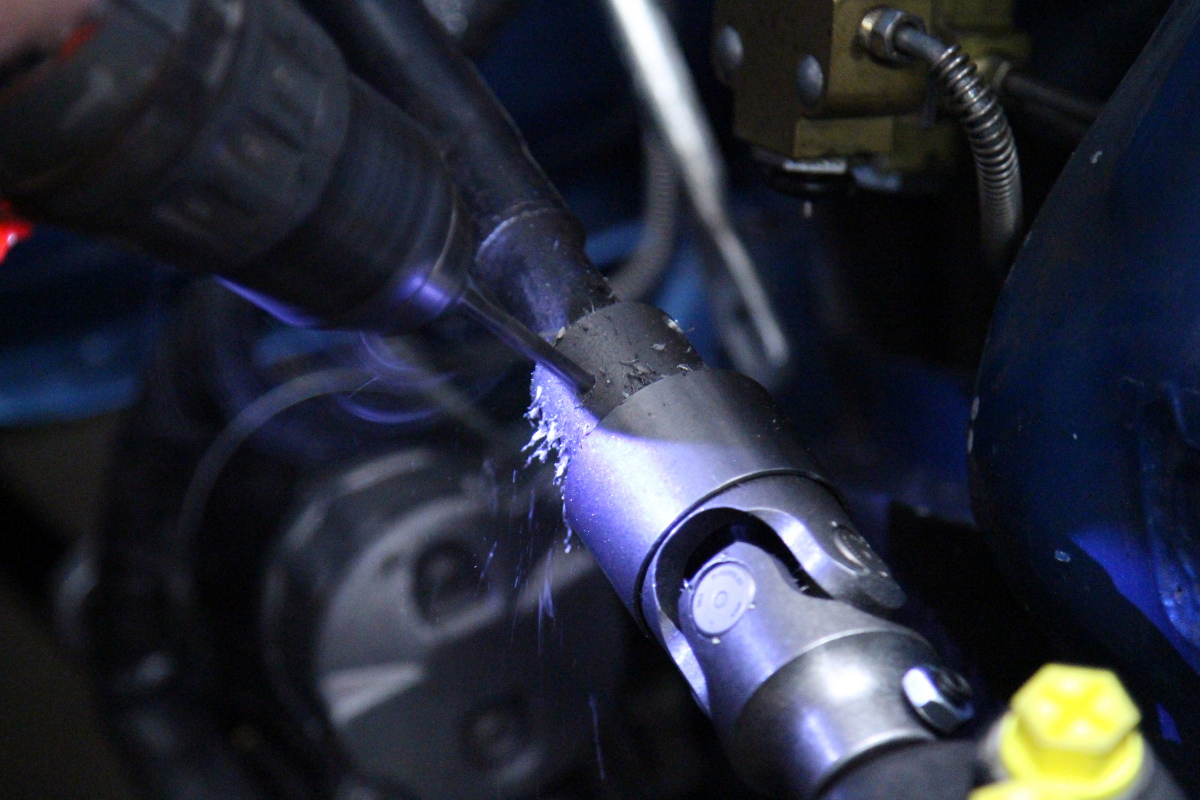 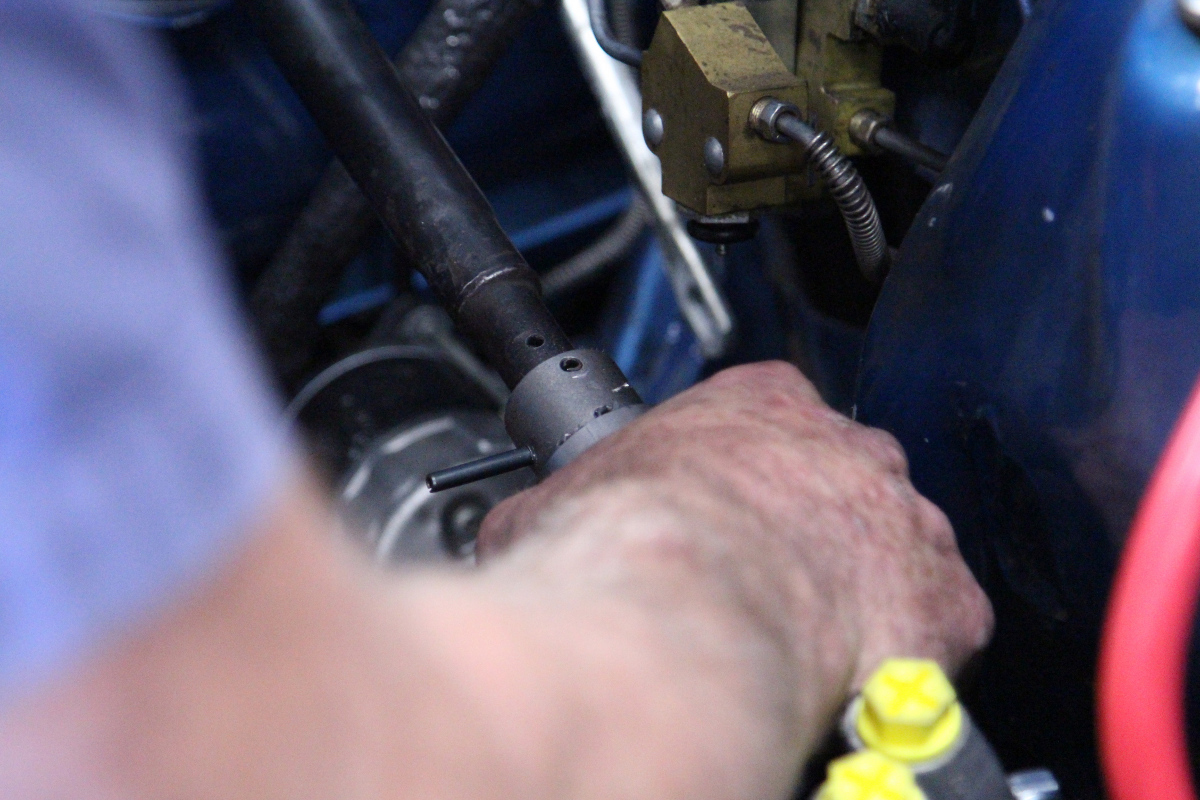 Some measuring is required to cut the factory steering shaft, and you know what they say: measure twice, cut once.

If you’re staying with all Borgeson components, the cutting and drilling of the steering shaft isn’t as intimidating as it sounds. Borgeson will include specific instructions showing where to cut, and a cutoff wheel is probably going to be best – especially if you don’t remove the steering column. It can be cut with the column in place, but as you might guess it’s a very small area to work so pulling the column would make things easier.

The included universal joint from Borgeson will mount to the new input shaft and the other end fits the factory steering shaft. With the universal joint installed, the first hole can be drilled into the shaft to install the first of three roll pins to secure it. I have found that the drill bit Borgeson supplies is more than adequate, and makes easy work of drilling the holes. It goes without saying, the steering column should be reinstalled and secured before you mark and drill the holes for the roll pins. 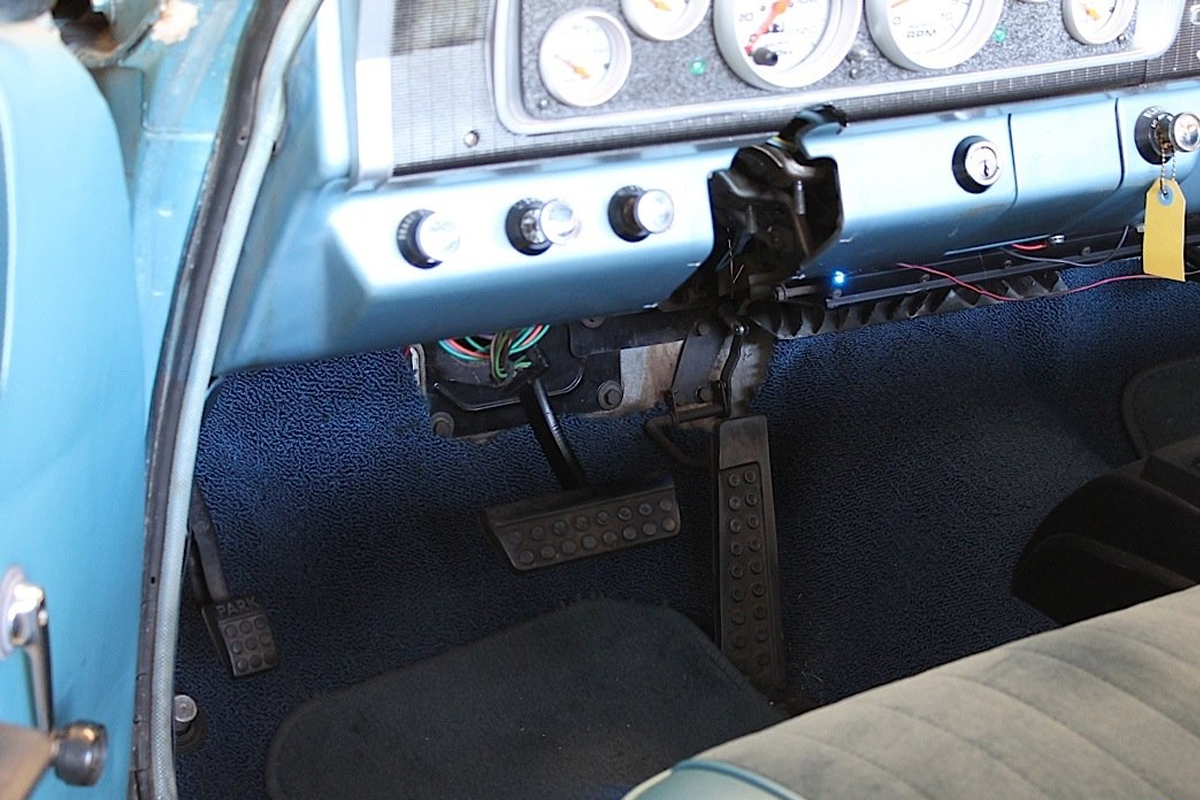 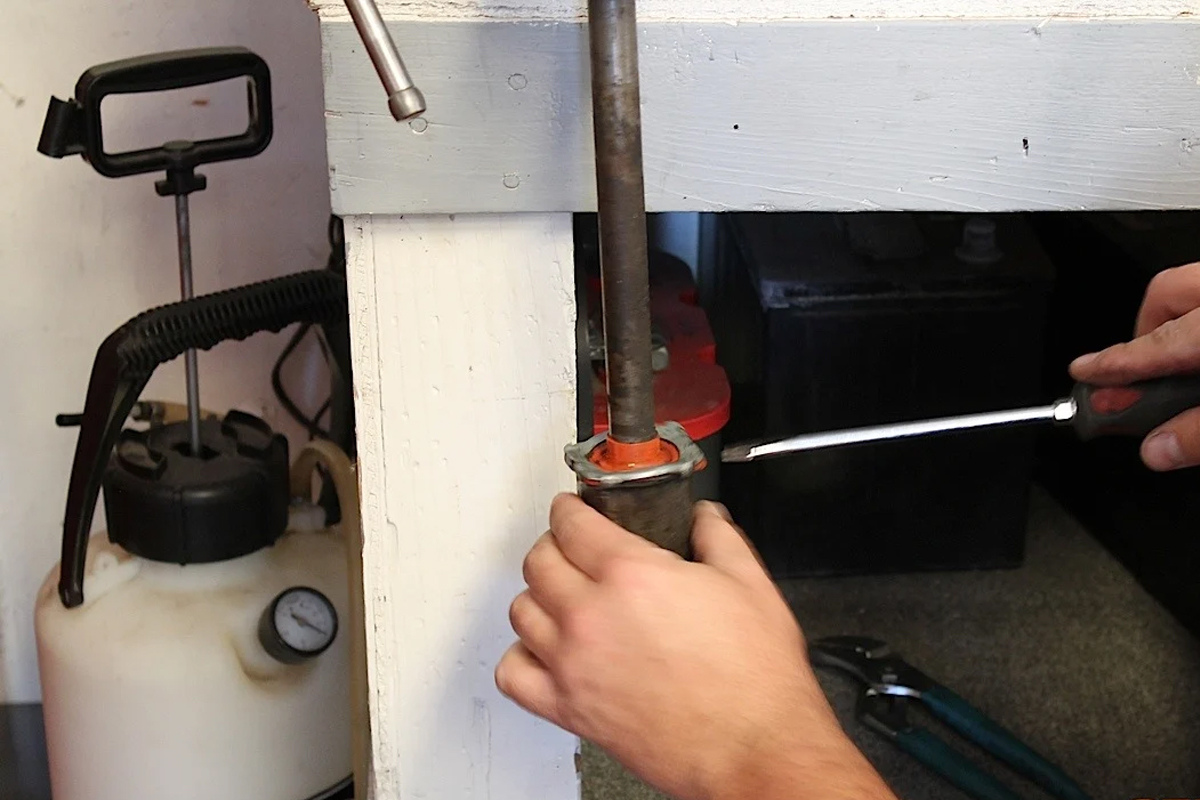 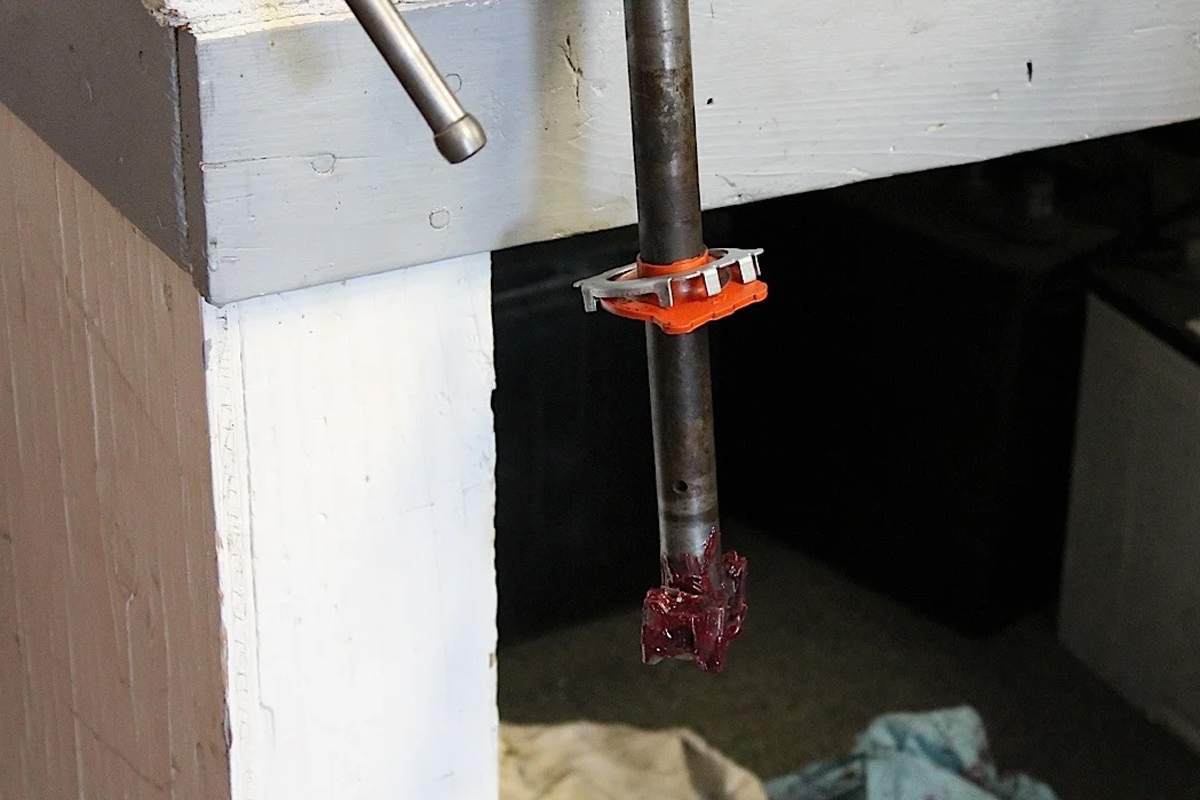 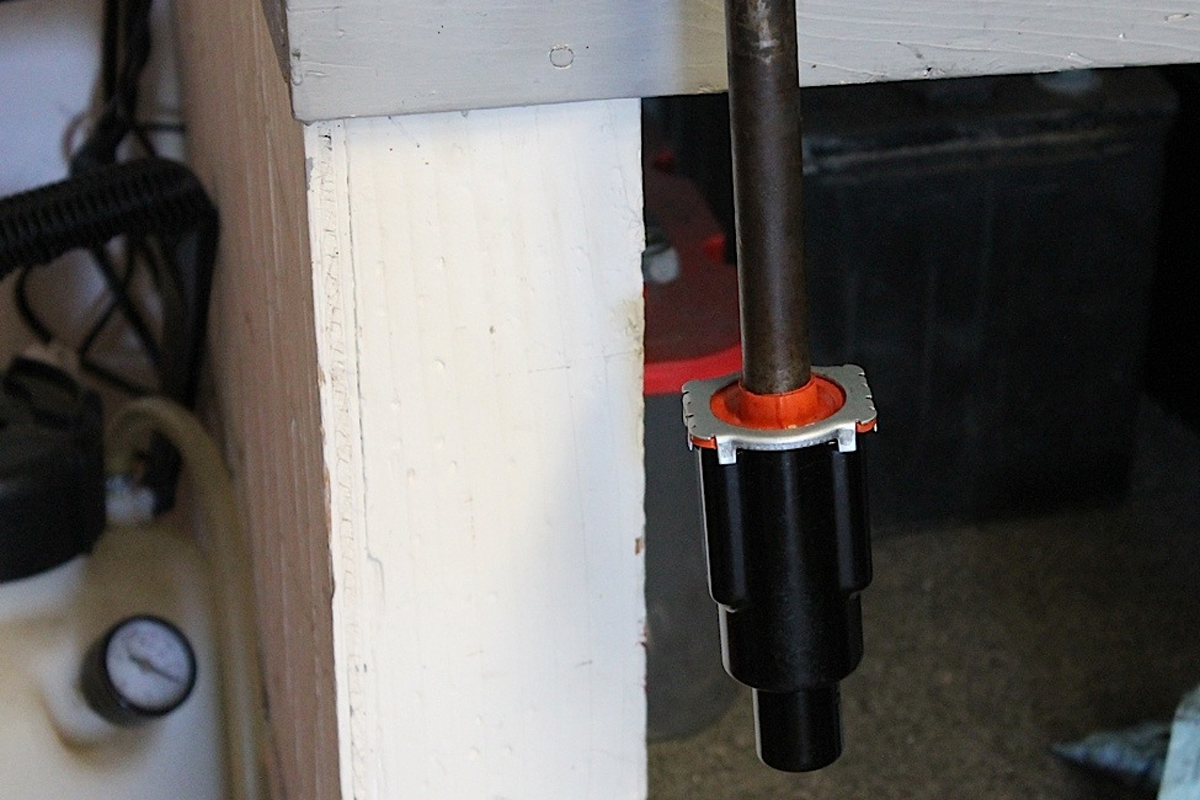 If you choose to purchase the steering coupler provided by Bergman Auto Craft, as we did on this upgrade, cutting the shaft won’t be necessary, and the only difficulty is that pesky grease cap retainer that all of us Mopar owners just love. You will have to remove the factory roll pin, and that is also best done with the column out of the car, and hammered out using a punch and resting the shaft on a vise, or some place solid to pound out the roll pin.

The next part of the install, after the coupling is made and secured, is installing the pressure and return hoses. Borgeson has a hose kit available, as the fitting sizes on the power valve are not going to work with your OE power steering hoses. Should you desire to use AN fittings, Borgeson also has adapters with the proper thread to convert your hoses.

If your power steering pump is a little tired and in need of a rebuild, Borgeson has you covered there, too. A brand new Saginaw pump with a custom mounting bracket will make simple work of replacing the pump for a reasonable cost for both small- and big-block Mopars. The three OE pumps available on older cars make it difficult, and should you decide to change from the Thompson to the Saginaw, you might already know that the pump brackets are very different, and are extremely difficult to find. So the Borgeson Pump Kit makes good sense.

For many larger cars of that era, the super soft ‘Cadillac feel’ was popular; we often called that the “one-finger” steering, it was literally that soft of a feel that it required little effort to parallel park. While it was great for parking, one look over your shoulder to change lanes and you might find that you wandered into another lane already. Grantmeyer said, “Lane wandering is greatly reduced with a firmer steering feel, and you can regain your confidence to look over your shoulder when changing lanes.” 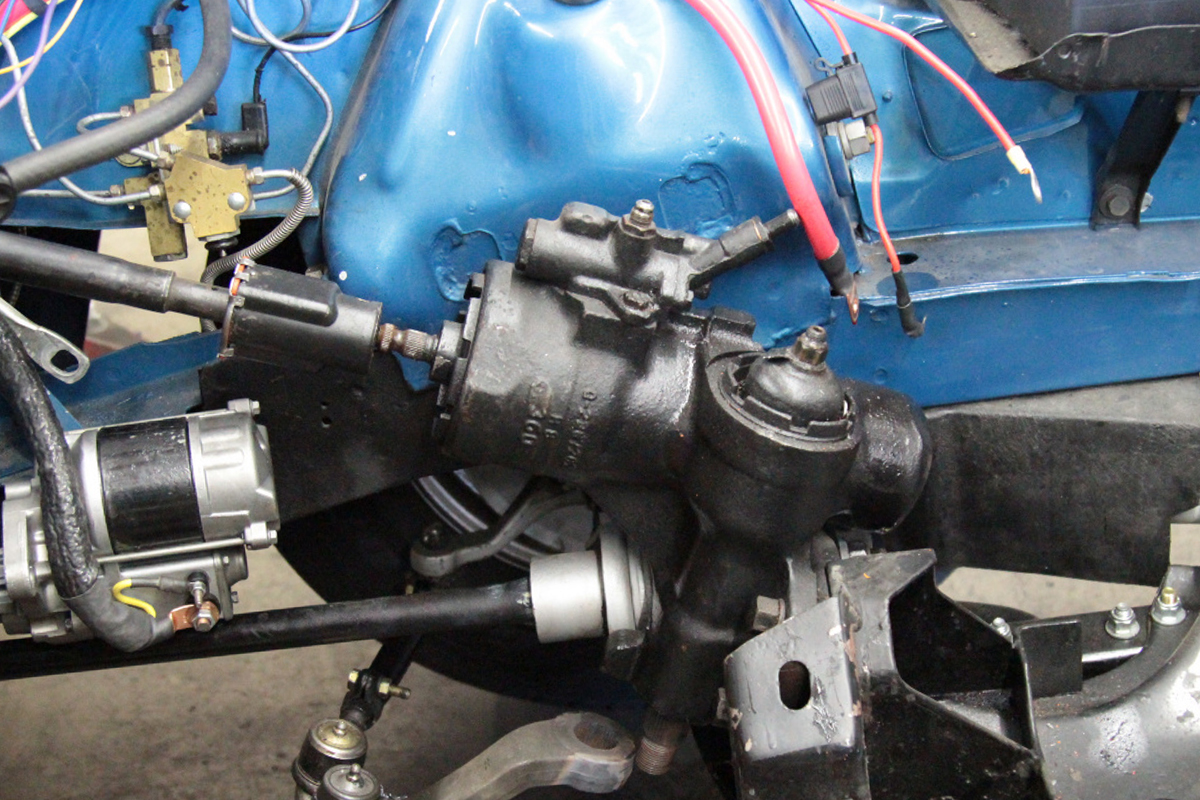 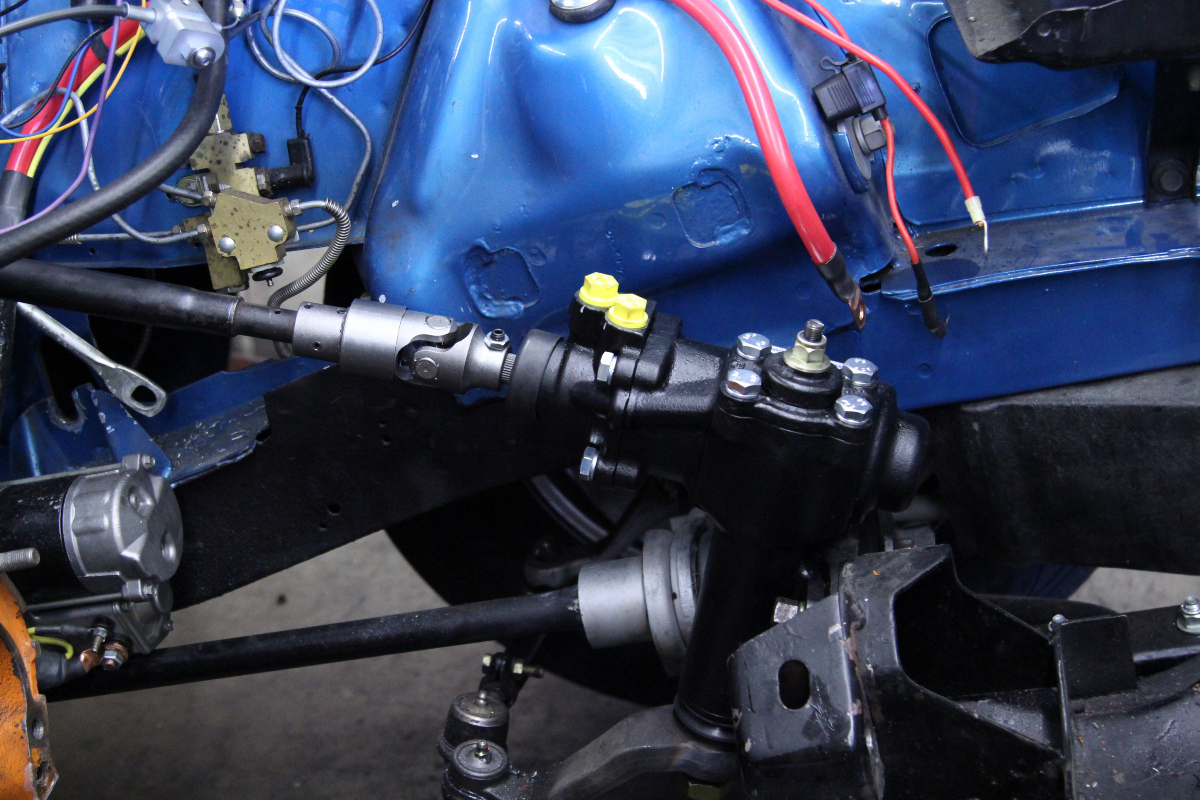 The difference in size between the OE and the Borgeson is considerable, shown here on a 1972 ‘Cuda.

The other thing that we noticed with the firmer feel is the steadiness of it, and limited movement needed in trying to keep the car aimed straight. In the past, as Grantmeyer eluded to, the car would easily wander when you simply looked over your shoulder to change lanes (people do still look over their shoulder, don’t they?), but now with the Borgeson steering box when you turn back around you’re still in your own lane.

Out on the race track, the firmer feel and tight steering helps greatly going into tight turns, and placing the car where you want it to be in the sweepers. No more fidgeting around with the steering wheel trying to avoid dropping your outside tires off the edge of the track. The only negative I could leave about the Borgeson Power Steering Gearbox is that the smaller, lighter unit is currently only available for Mopar vehicles from 1962-1982, whereas the Ford and GM steering boxes are full sized units. 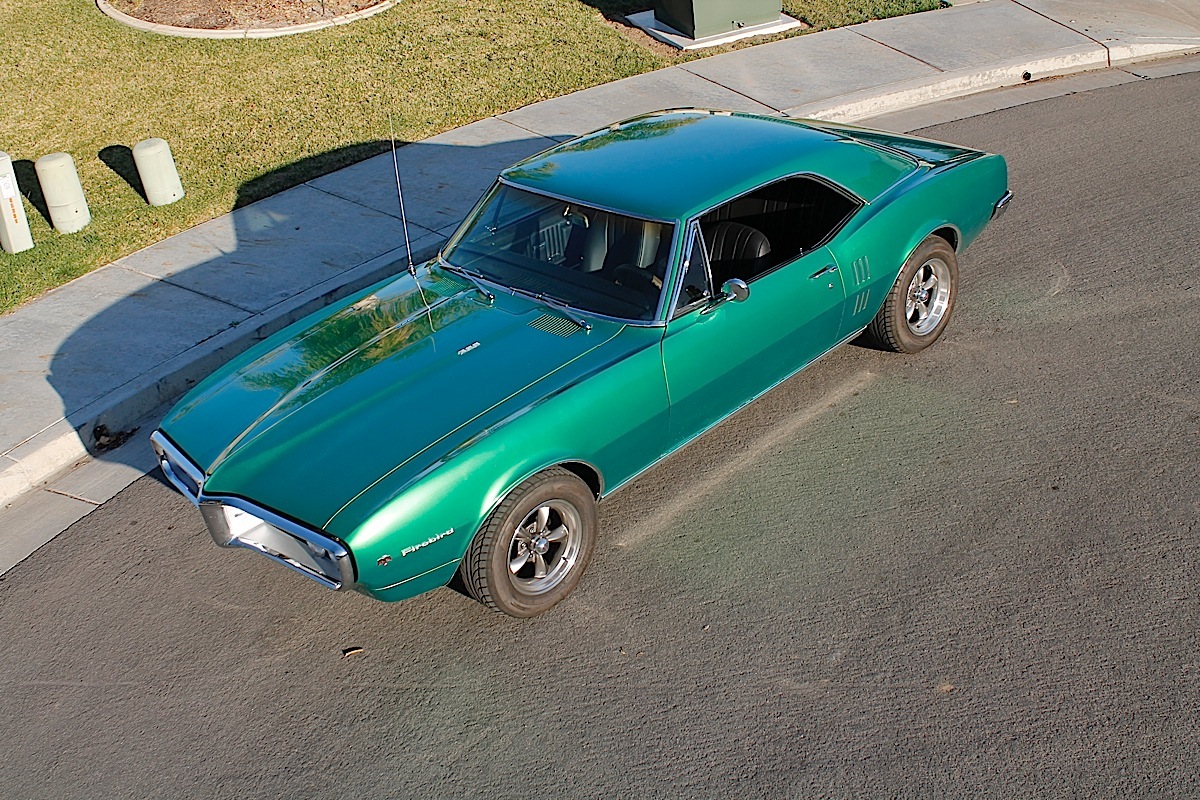 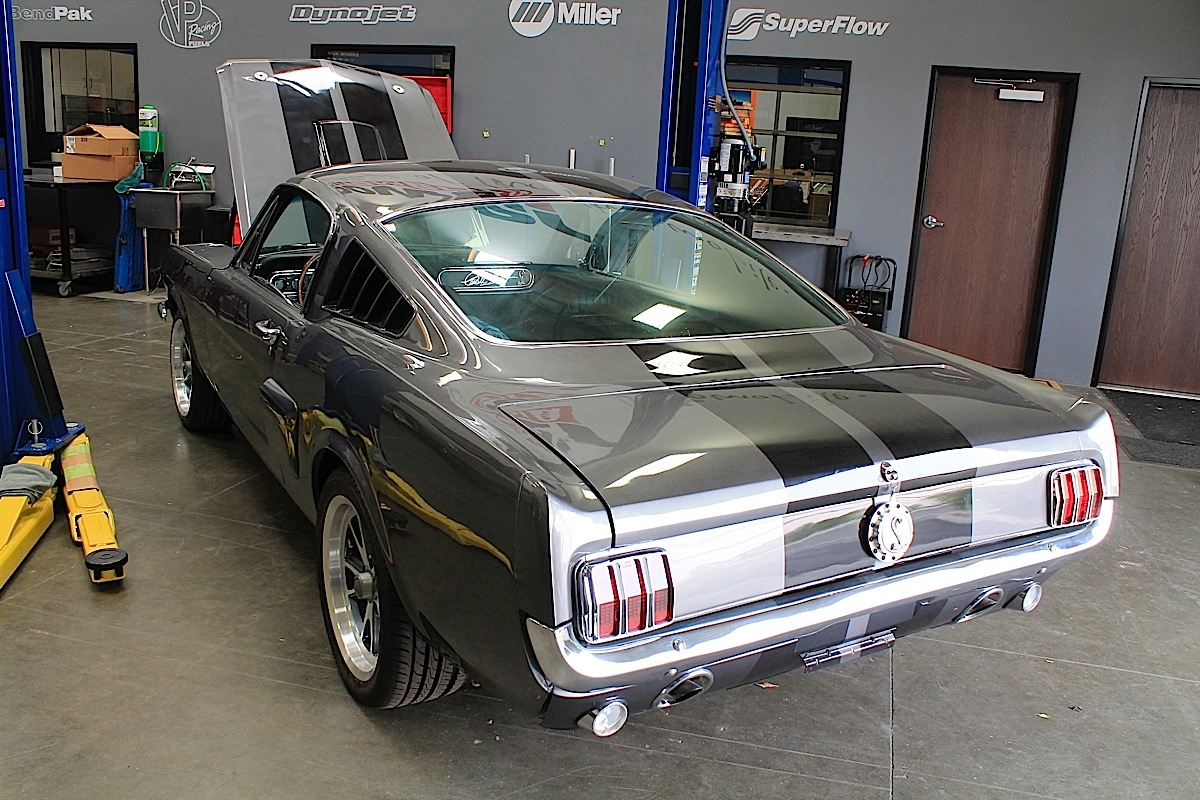 The owner of the Firebird was a hard sell on swapping over to the Borgeson, but admitted that he was very happy with the performance afterwards.

They all have a quicker ratio, with the GM having a variable ratio, and all are solid units that win over anyone who swaps one in, even some people who need a lot of convincing to try it have come back later, glad they did. When pricing out similar components from Firm Feel (they offer a quicker ratio with a shorter Pitman/Idle Arm combo) the pricing for the Borgeson unit with the hoses and coupler is very competitive. Give Jeff a call at Borgeson, he’ll steer you straight.