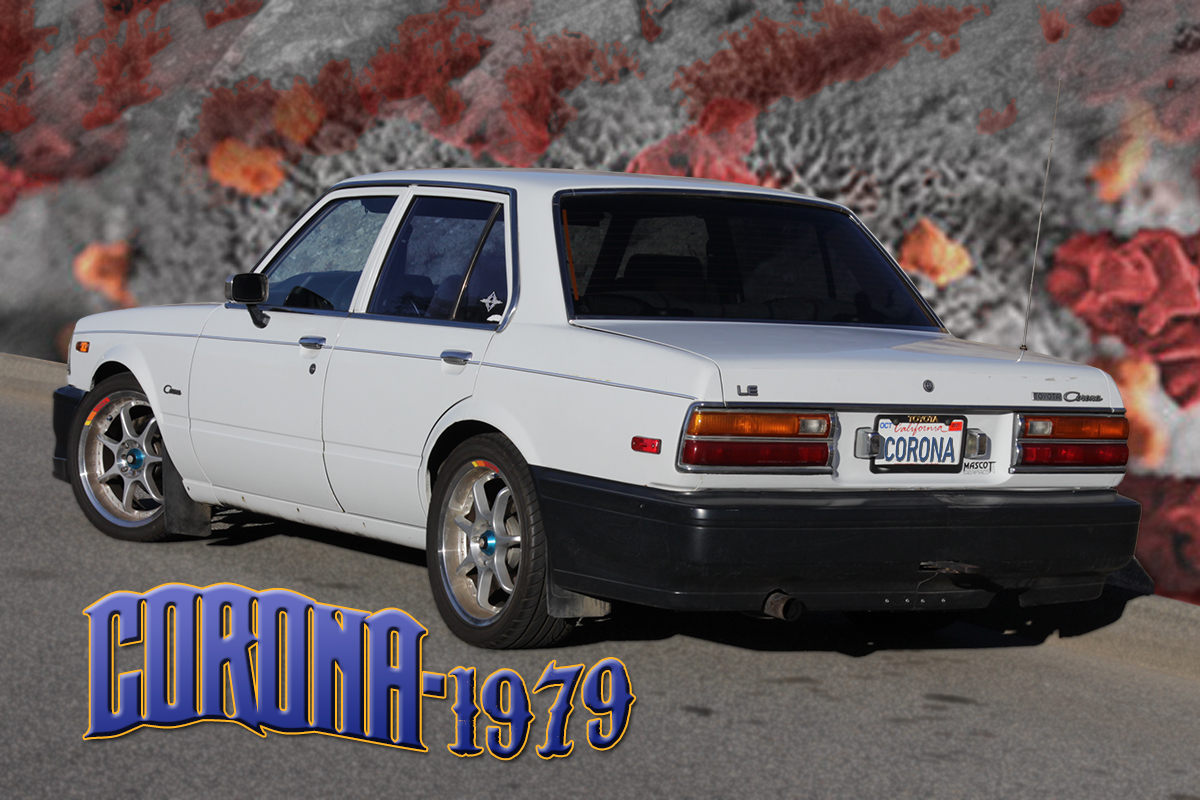 These days, when you tell someone you have a Toyota Corona, many people associate it with its more popular sibling: the Corolla. But the Corona was a quite popular model many years ago, and was built from 1957 through 2001, with models in the U.S. from 1960 through the 1981 model year. In the U.S. the Corona was always a rear wheel drive vehicle, and it shares similar drivetrains with the Celica throughout the 1970s.

This Corona was a replacement vehicle for a 1978 Celica that had been totaled in a rear end collision. The search for a decent replacement for the Celica was running thin, then a 1979 Corona LE popped up online and that prompted a little research. The initial goal was to transfer all of the performance parts over to another Celica, but the Corona was intriguing and it was discovered that many of its components, specifically the drivetrain and suspension, were very similar to the Celica.

There were also some parts that were shared with the 1979-1981 Celica Supra, and it was decided that the Corona would become a sportier version of itself – a “four-door Celica”, if you will. The Corona was purchased, and that next weekend the transformation began. First it went through some clean up, then the tools were out and with both cars side-by-side the swap commenced.

The interior was shot, and though it would have been a neat idea to swap out the entire interior, that wasn’t feasible because very little of it was going to match up. Being the primary vehicle and a daily driver, the transfer of parts was something that needed to happen on weekends so the car could be ready for the Monday morning commute.

After inspecting the condition of the sheetmetal, it was discovered that the rear body panel was rusting away. Fortunately, a replacement panel – likely the last one available in the country – was found at a dealership in Seattle, and the panel was replaced prior to repainting the car. It was repainted in white, which included inner doors, door jambs, and inside the trunk. Unfortunately, they did a horrible job and didn’t machine sand and primer the car as promised, and these days it’s started to become more evident. 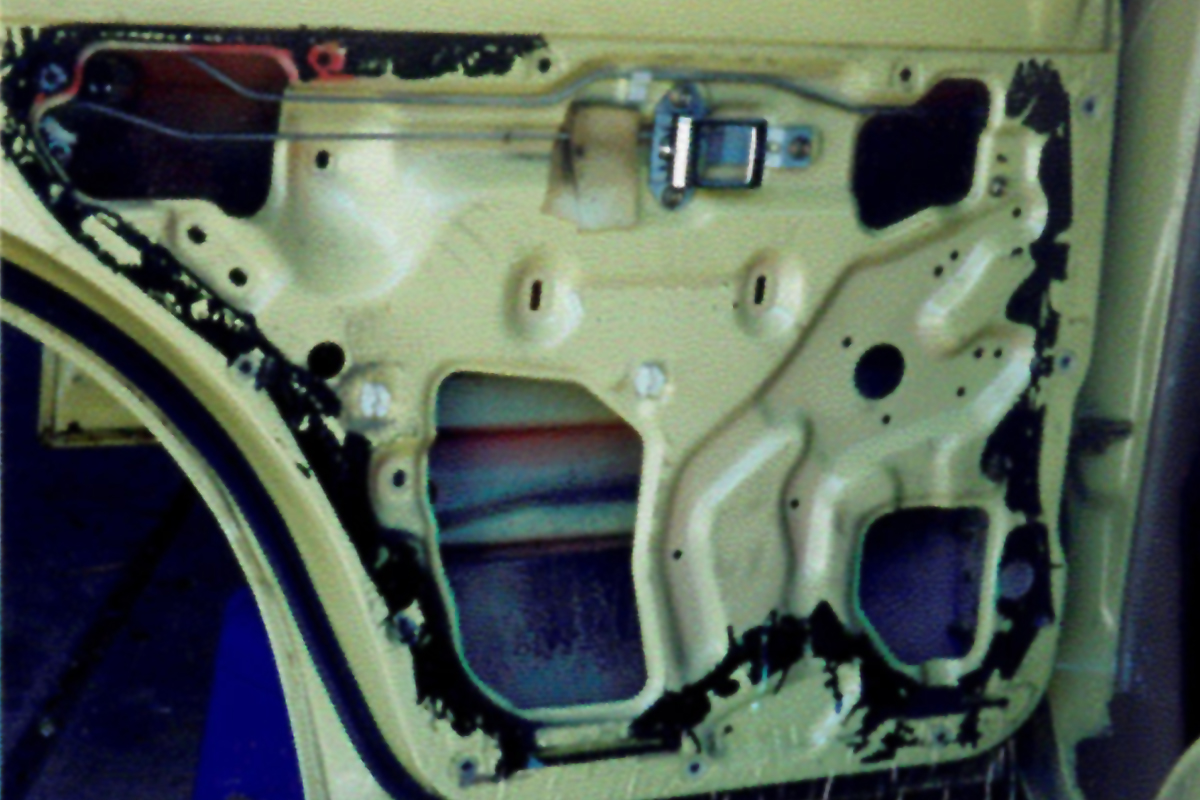 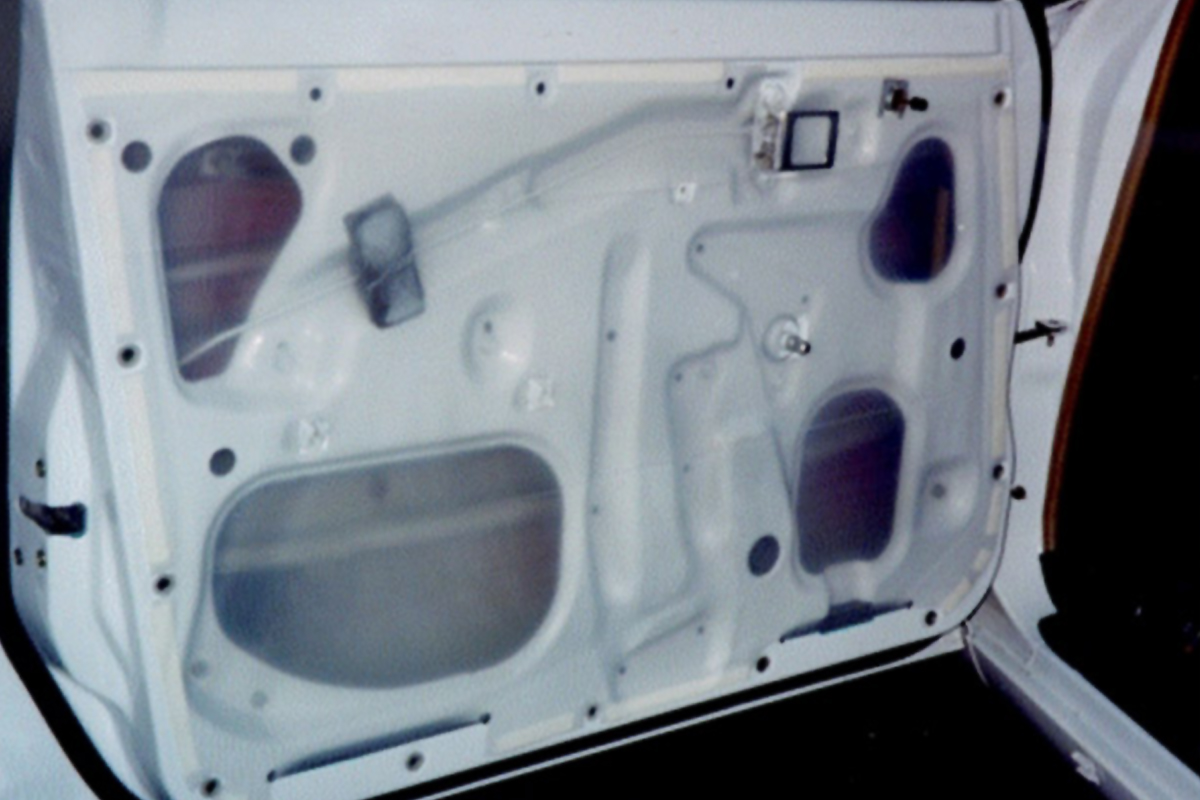 Inside the Corona, many parts were broken, or just missing entirely. On the outside, lenses were cracked, trim was missing, and both interior and exterior needed the same amount of attention. At that time there were still some parts available for the Corona, and finding a car at local wrecking yards was not as rare as it is today.

Fortunately, two cars showed up one week and both had equally nice interiors. One car was damaged in the front, and the other was hit in the rear – what a score! One of the cars had a black and gray interior, and the other matched with a tan interior, but a few of the tan components were cracked or broken. The project became a ‘black & tan’ interior – which wasn’t an option from the dealer – and that meant tan trim with black accents, and a black center console and dash pad.

The seatbelts were practically new, but the seats in all three cars were in pretty bad shape. A few cars away was a 1985 Celica GTS, and the seats were not great, but they looked like a decent swap, so they were test fit into the Corona right there in the yard, and voila! they fit! So the GTS seats came home with all of the Corona interior trim. 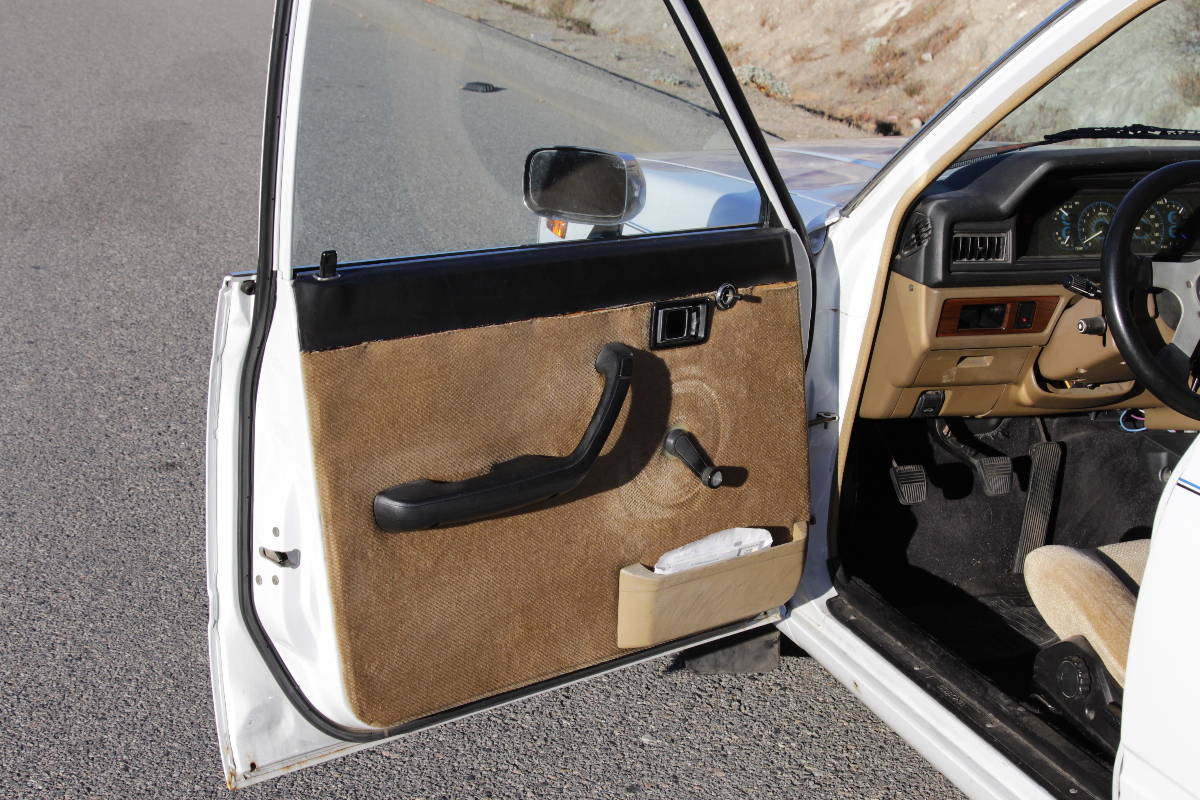 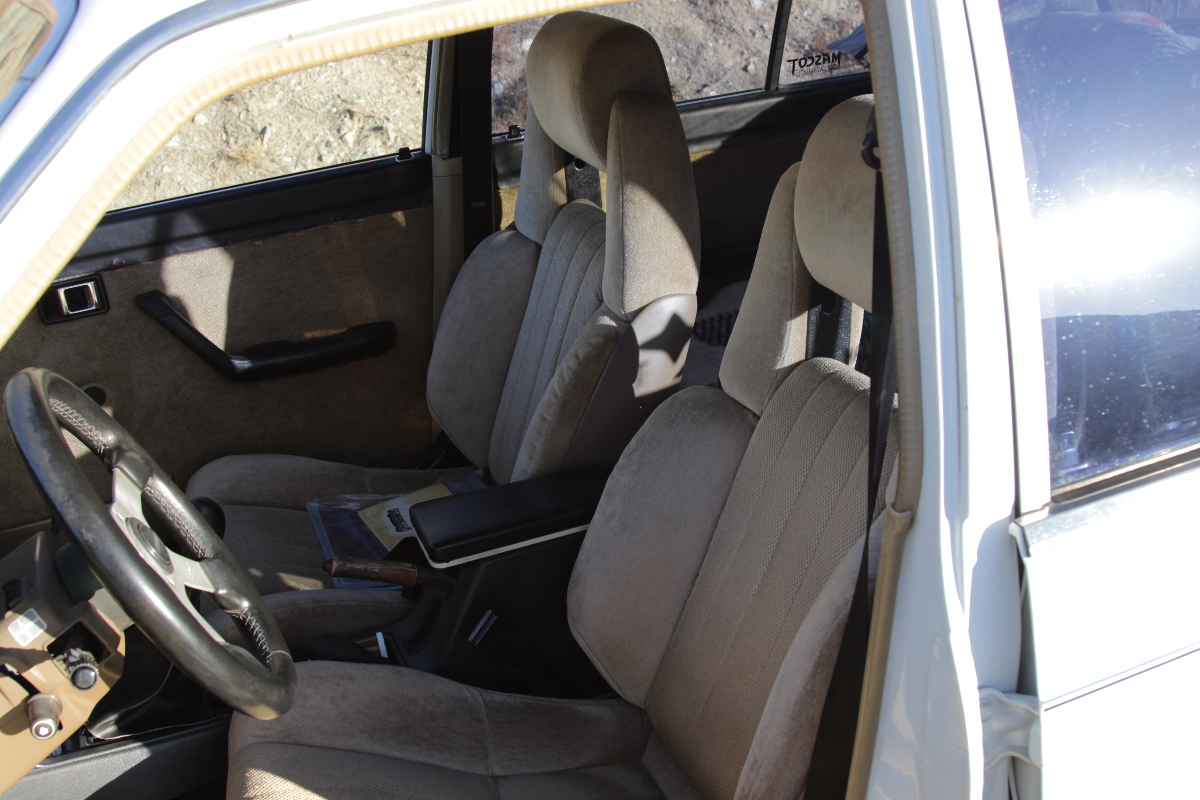 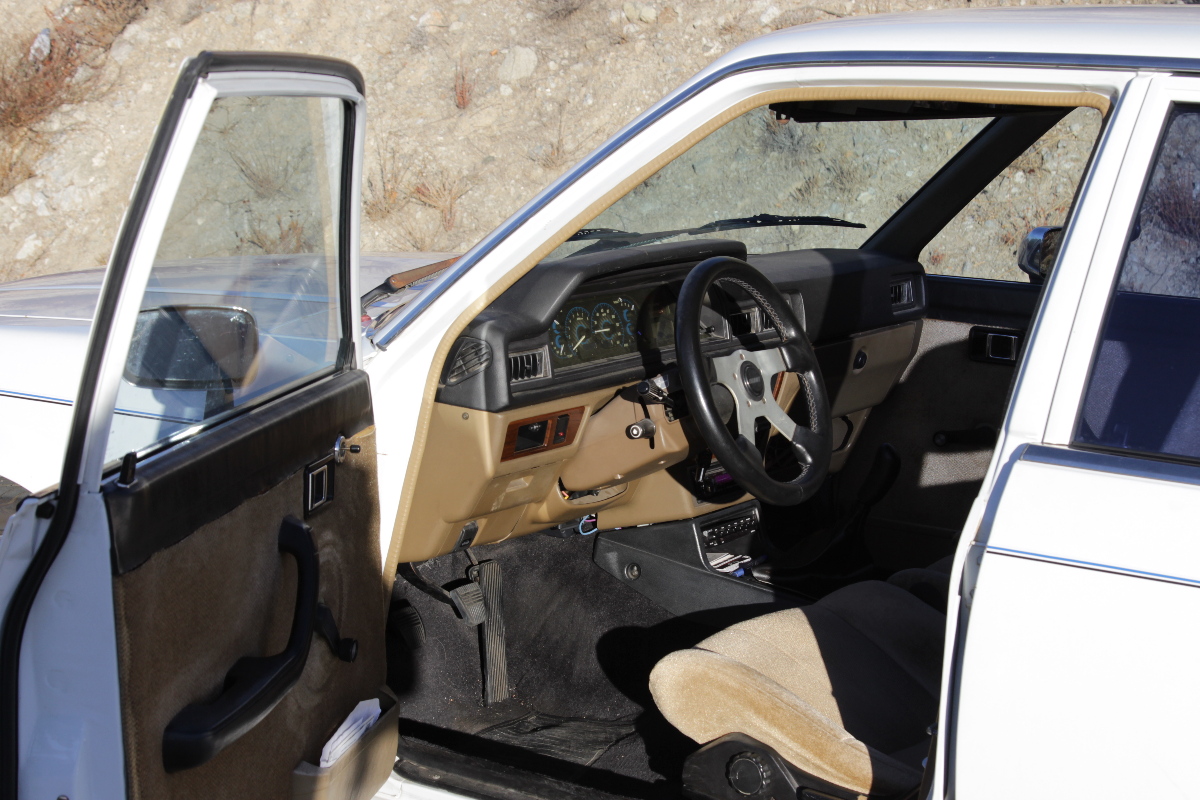 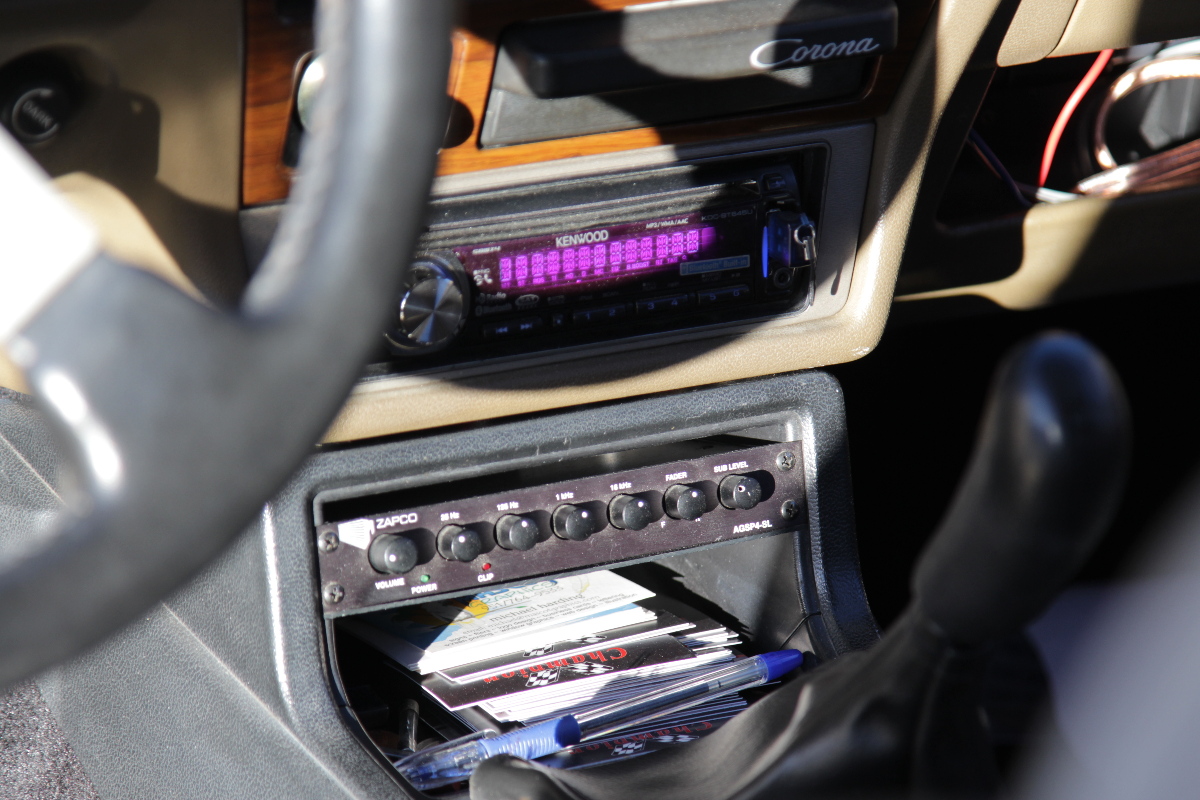 This was the result of mixing the interior parts from two different cars, I wouldn’t be so lucky today finding interior or exterior parts like this. The GTS seats fit perfectly and look great.

The exterior trim on both wrecked cars was in pretty good shape, so anything that wasn’t broken or cracked made it into the cart as well. After a day of salvaging parts, the two Coronas at the yard were just carcasses, and very little was left for the taking. It was a successful hunt, and provided a few weeks worth of parts to transform the Corona into something a little nicer.

Under the hood, it was discovered that the dimensions were identical to the Celica. While the Corona was promoted as a family sedan, the sportier Celica was always promoted as a sports coupe. Everything in the engine compartment, except for the core support, was eerily identical to the Celica. A custom-made, non-adjustable strut brace for the Celica was a direct bolt-in. The custom bracket for the FAST digital ignition – designed to use existing threaded bosses – bolted into the Corona identically.

There were very few mechanical components that wouldn’t swap over, even the sway bars and sport springs from the Celica were a direct fit on the Corona. After pulling the drivetrain and the rearend out of the Celica, it was compared to the Corona and it was a direct bolt-in. Then it was discovered that the two cars had identical wheelbases, so the one-piece driveshaft also fit into the Corona, replacing the two-piece unit that was sporting bad U-joints.

Eventually, the rearend that was purchased for the Celica made its way into the Corona, along with a Big Brake upgrade that was conjured up at a wrecking yard one day. It was interesting to note that the 1981 Celica Supra rearend – with a limited slip Eaton Truetrac and factory disc brakes – was also a direct bolt-in on the Corona. The only required modification was the parking brake cables to attach to the rear calipers. 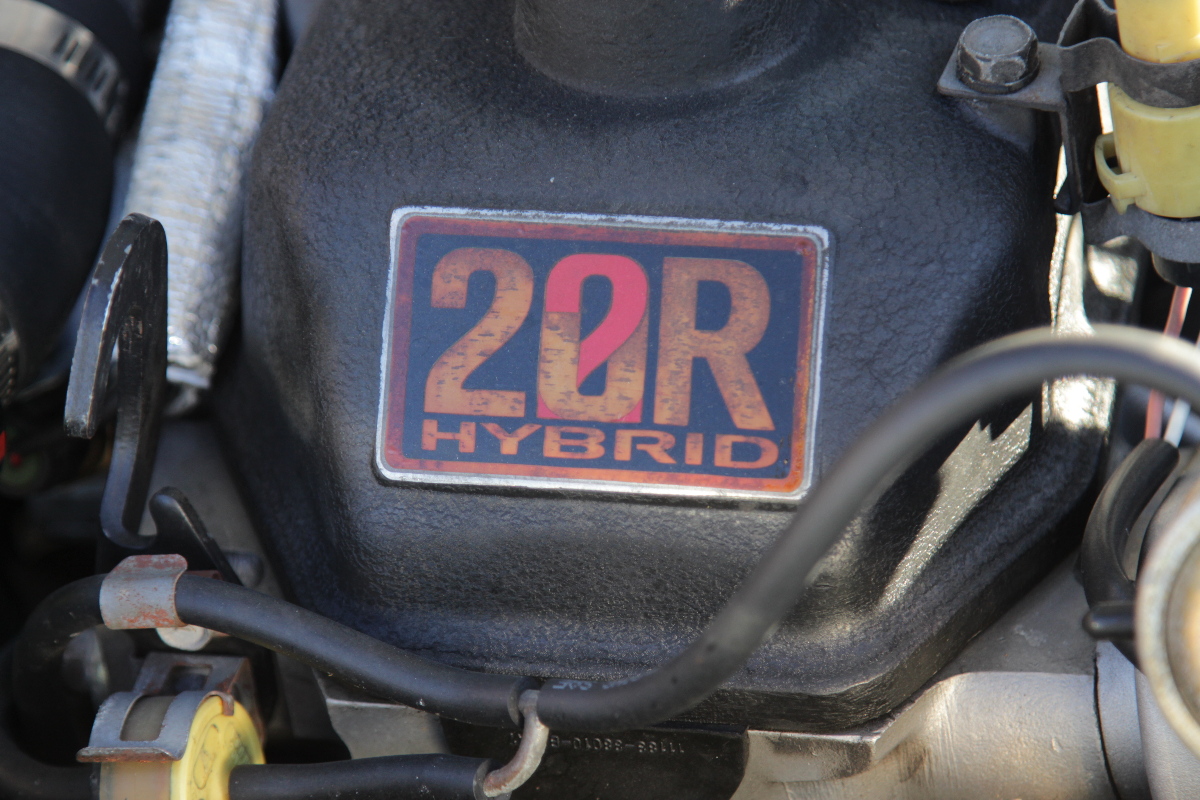 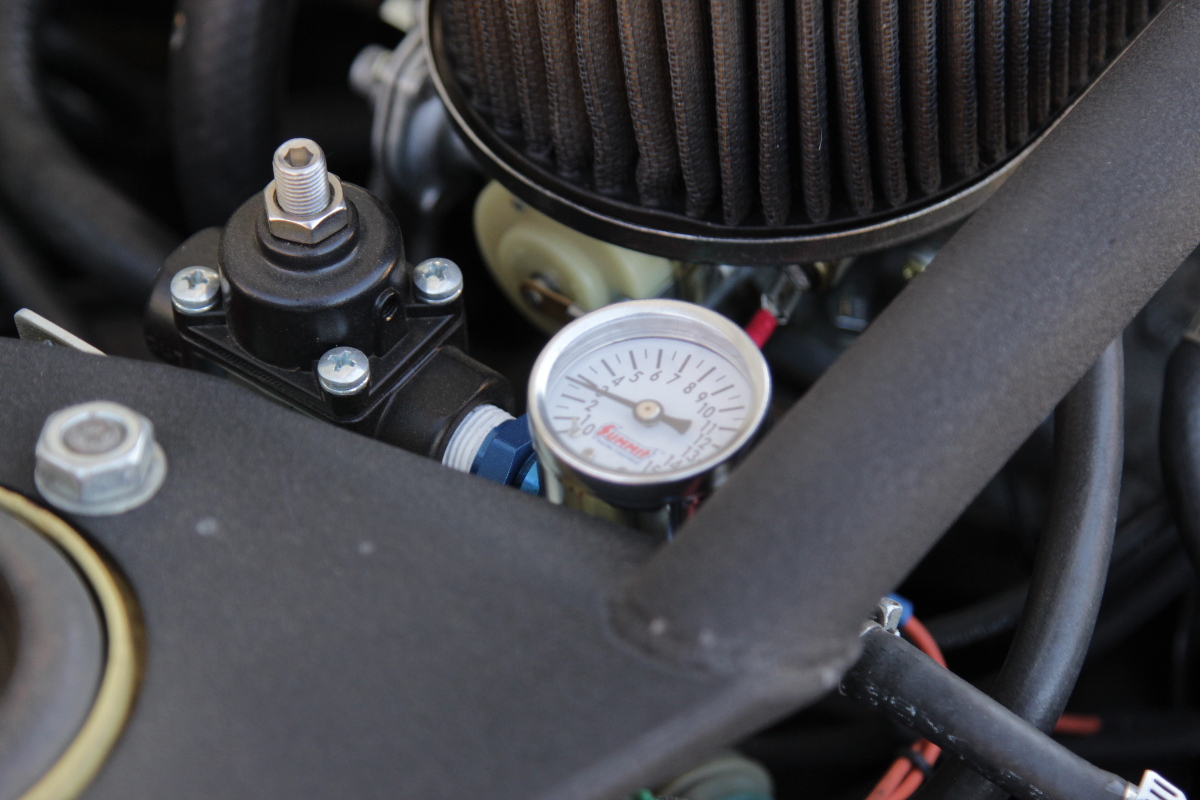 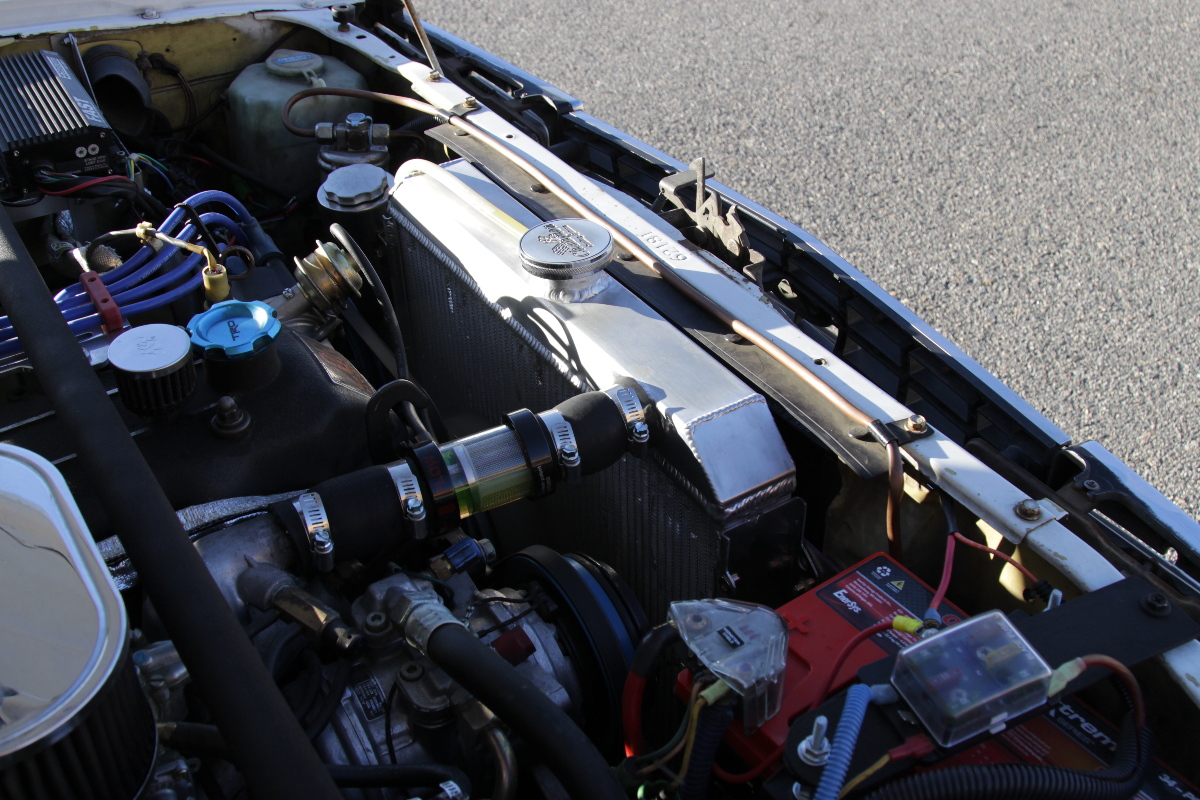 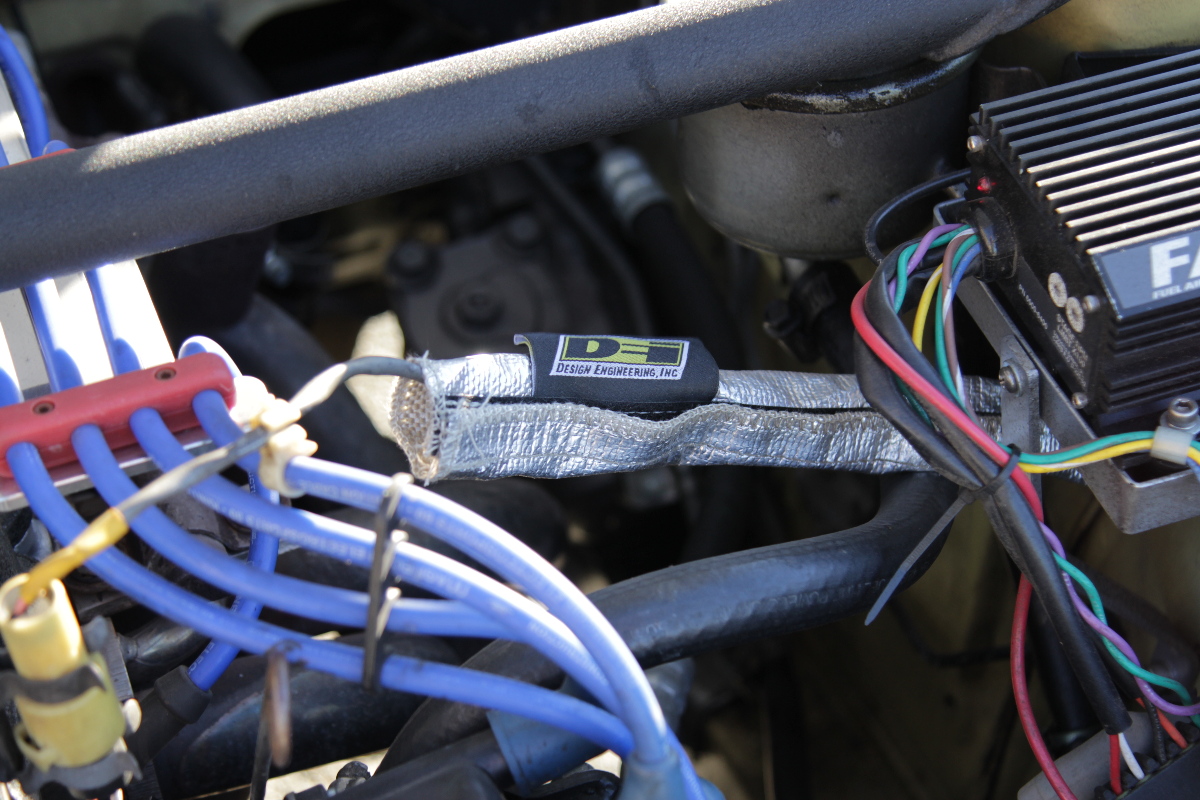 The engine that was built for this car is what they called a 22R Hybrid. They started calling it this at a time when we didn’t actually have ‘hybrids’ as we know them today, and that confuses people when they see that Hybrid sticker on the valve cover. The engine is a later 22R block (1981 – 1984) and a 20R cylinder head. The 20R is a 2.2 liter while the 22R is 2.4 liters.

This combination raises the compression a little and increases the displacement. Everything bolts up properly, and with the right combination of cam, carb, and exhaust it should net a few more ponies, as well. The carburetor is a 50-state legal Weber progressive 32/36 unit that reroutes a few of the emission vacuum hoses, but remains a legal, CARB Certified unit with its own Executive Order (EO) number.

The camshaft is a TRD Stage 1 cam, also 50-state legal, as is the Thorley header. While the horsepower isn’t stellar by today’s standards, it is pretty impressive at about 140 HP, considering the engine is stock with about 88 HP. Plans for this little engine include either going EFI with a 22RE from a 1985 Celica, or dual sidedraft carburetors. The latter option would be easier, but would be “illegal” in California, so we’re always keeping our fingers crossed that the testing is moved up to 1981, like they keep saying. 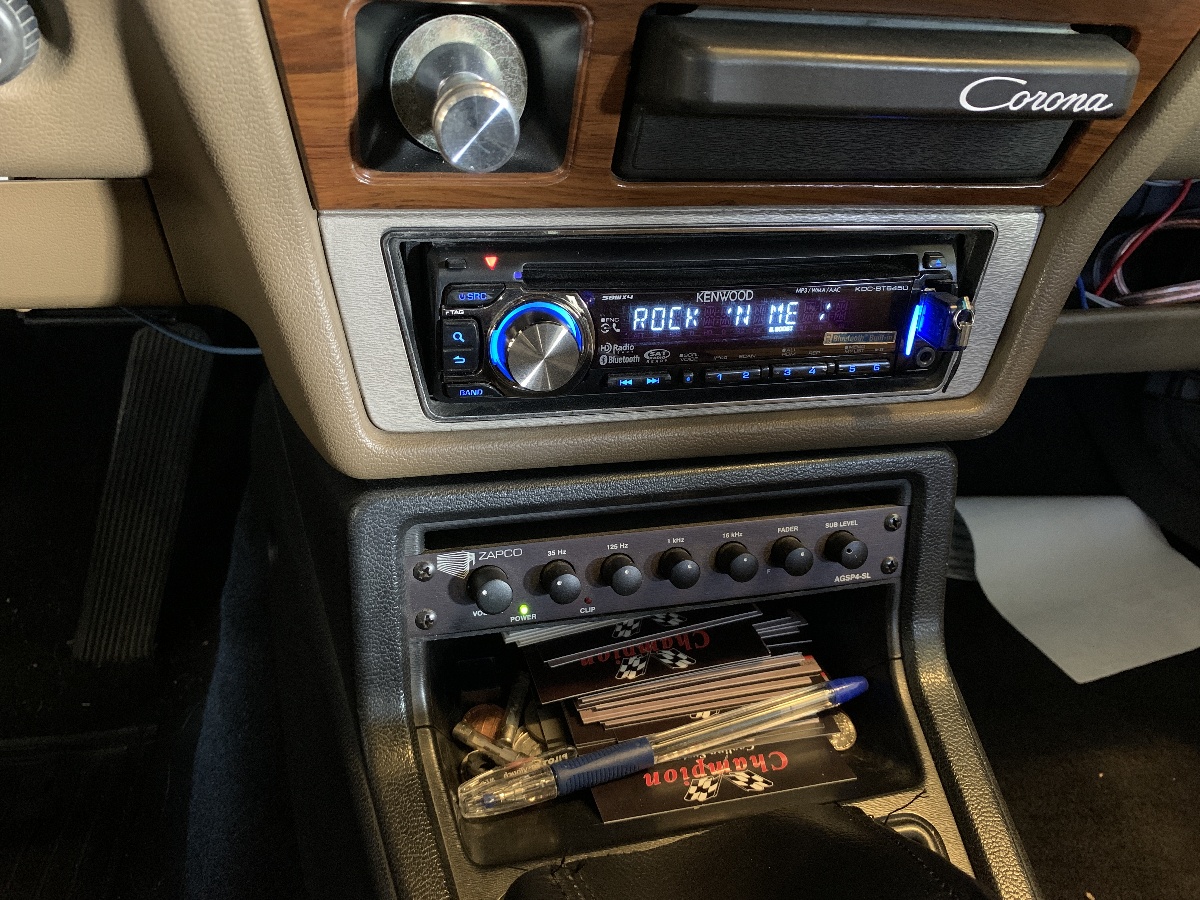 A Rare Car On The Streets Today

The Corona isn’t spectacular, but it was pretty cool in its day. The audio system is mostly hidden, but includes a pair of ZAPCO amplifiers, ten speakers, a ZAPCO signal processor fabricated into the factory console, and a Kenwood head unit with USB connectivity and Bluetooth. It’s rated at about 700 watts, but even with the pair of 10″ JL Audio subs in the trunk, it’s kept at a decent volume. The system was set up more for listening quality than window flexing.

Other modifications include a Dakota Digital VHX cluster fabricated into the factory dash, expect that modification in an upcoming article in our Project Cars portion of this blog. More interior upholstery is needed, that project was almost completed but got put on hold for a few years, although the rest of it is holding up rather well.

Probably the coolest upgrade to the car, though, was the factory air conditioning that was added in the early 2000s. Back in its day, the optional A/C was added at the dealer for many of these cars, and provided by Toyota in kit form. The car arrived at the dealer wired for A/C, so included in the kit were all the switches and adapters, as well as the rest of the components from condenser to evaporator.

A kit was found on eBay in 1999, and the kit just happened to be the correct kit for the 1979 Corona, and was purchased for a paltry $75. Everything was there in the kit, and when the new engine went in the ‘new’ A/C was installed at the same time. It was a little easier to install with the engine removed, but works great and was a pretty simple install.

Incidentally, insuring the car with all of those modification isn’t going to happen with standard insurance, so a call was made to Hagerty classic car insurance. After a brief discussion, they asked for a few pictures and a write up on the modifications and to send it in. A couple of days later, they said that they’ll cover the insurance for an agreed-upon value. The best part? Full insurance runs just $120 a year.

Now, when the hopped up Corona pulls up to a Cars & Coffee, people are often curious what the car is, and what year it is. All sorts of guesses are made, and when they’re told it’s a 1979 Toyota Corona, the inevitable “Corolla?” still comes. Some things just never change. 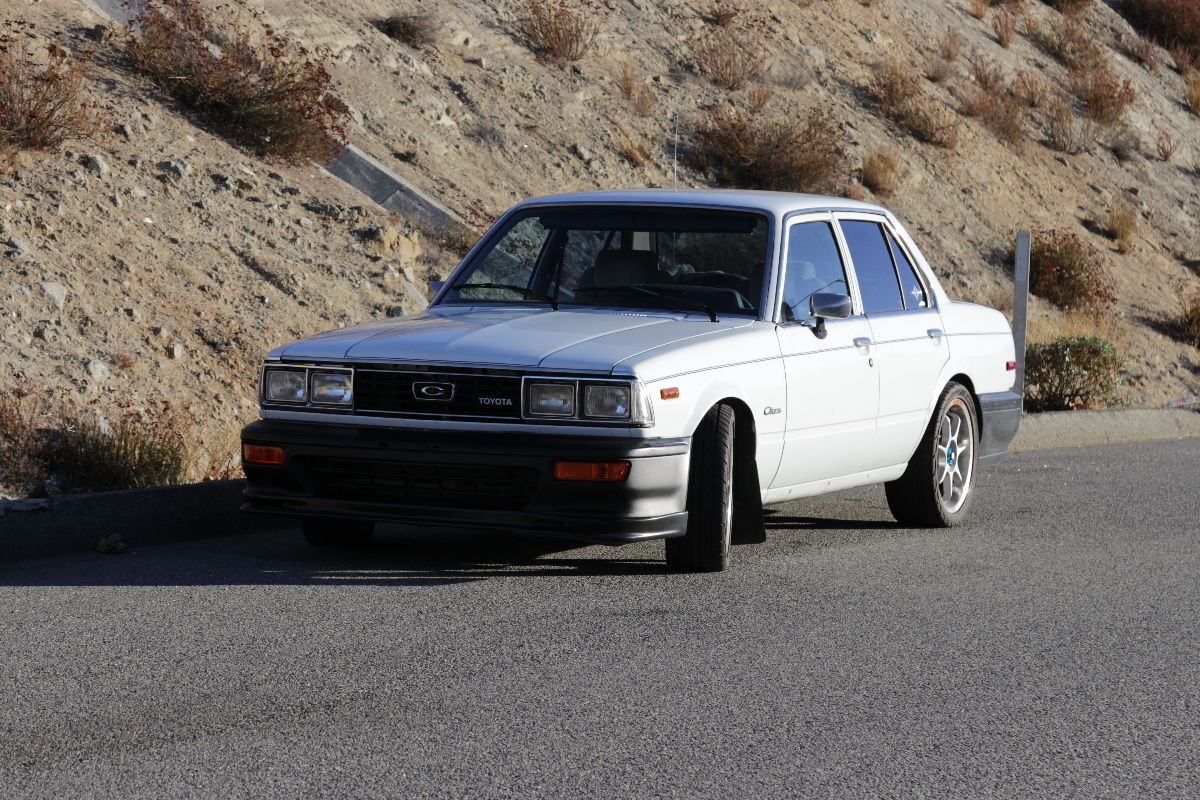 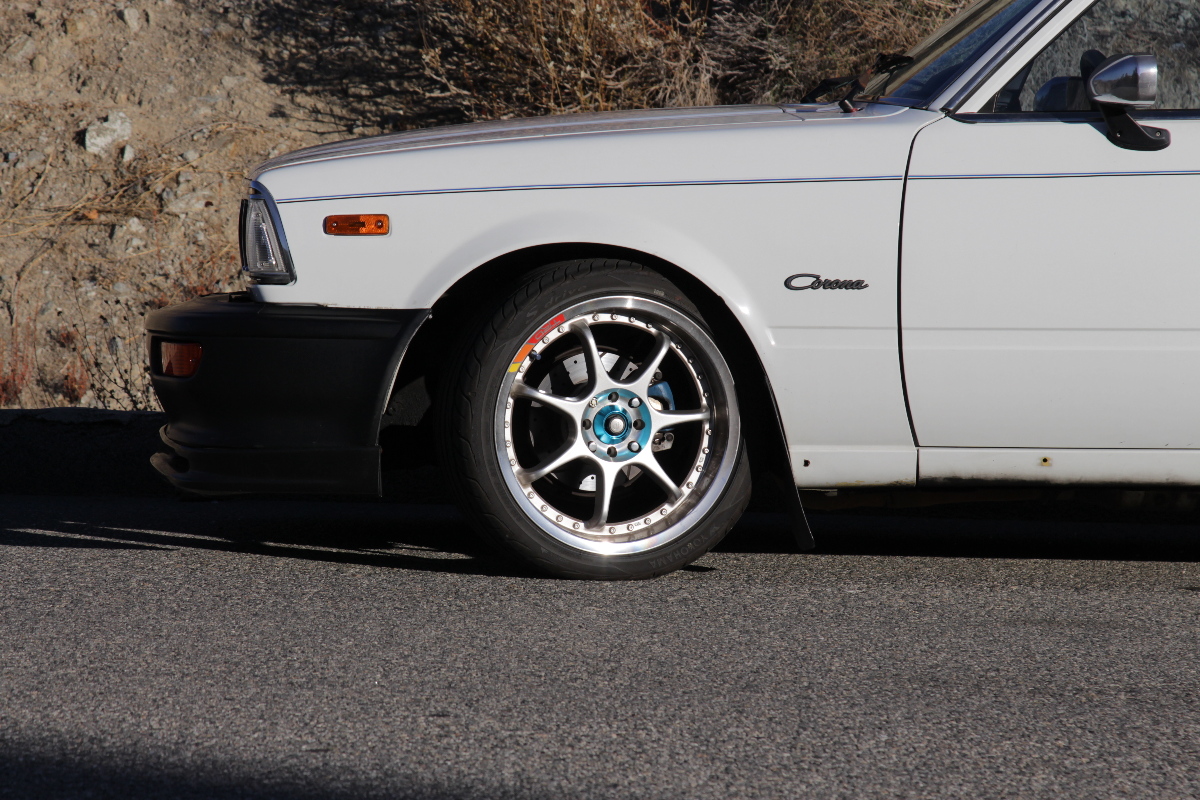 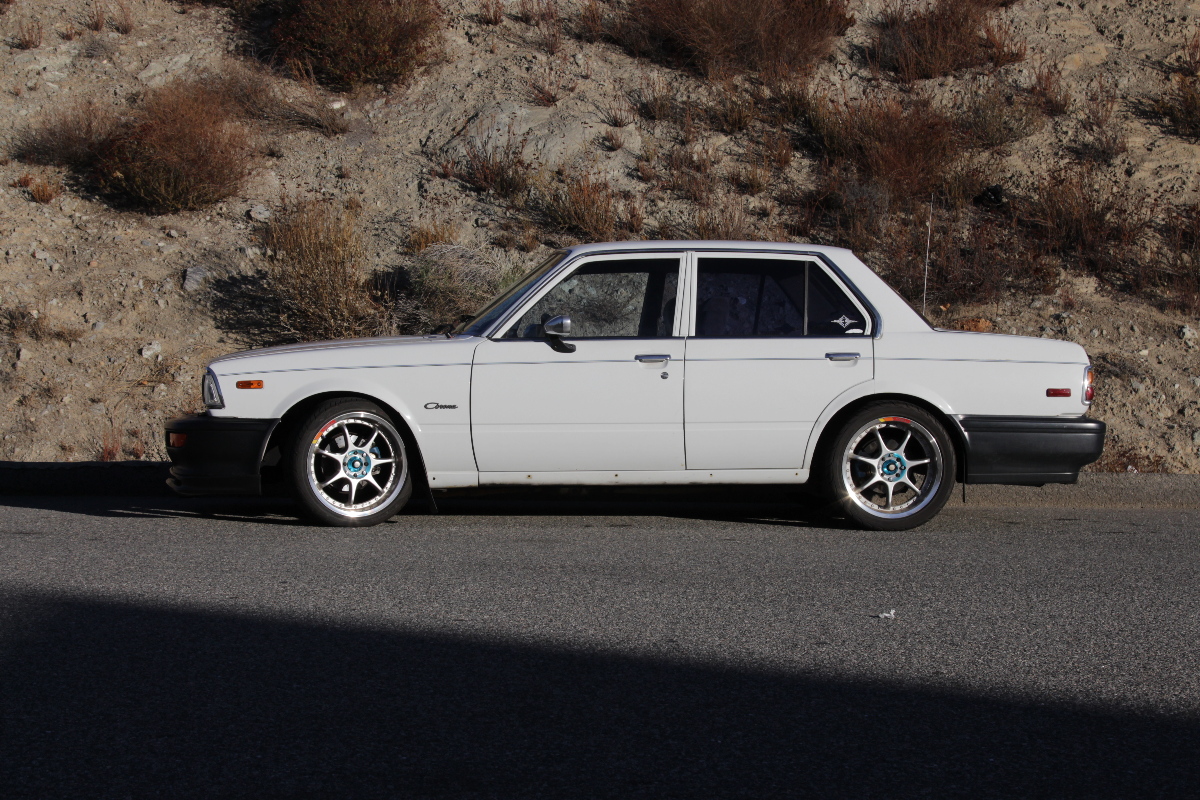 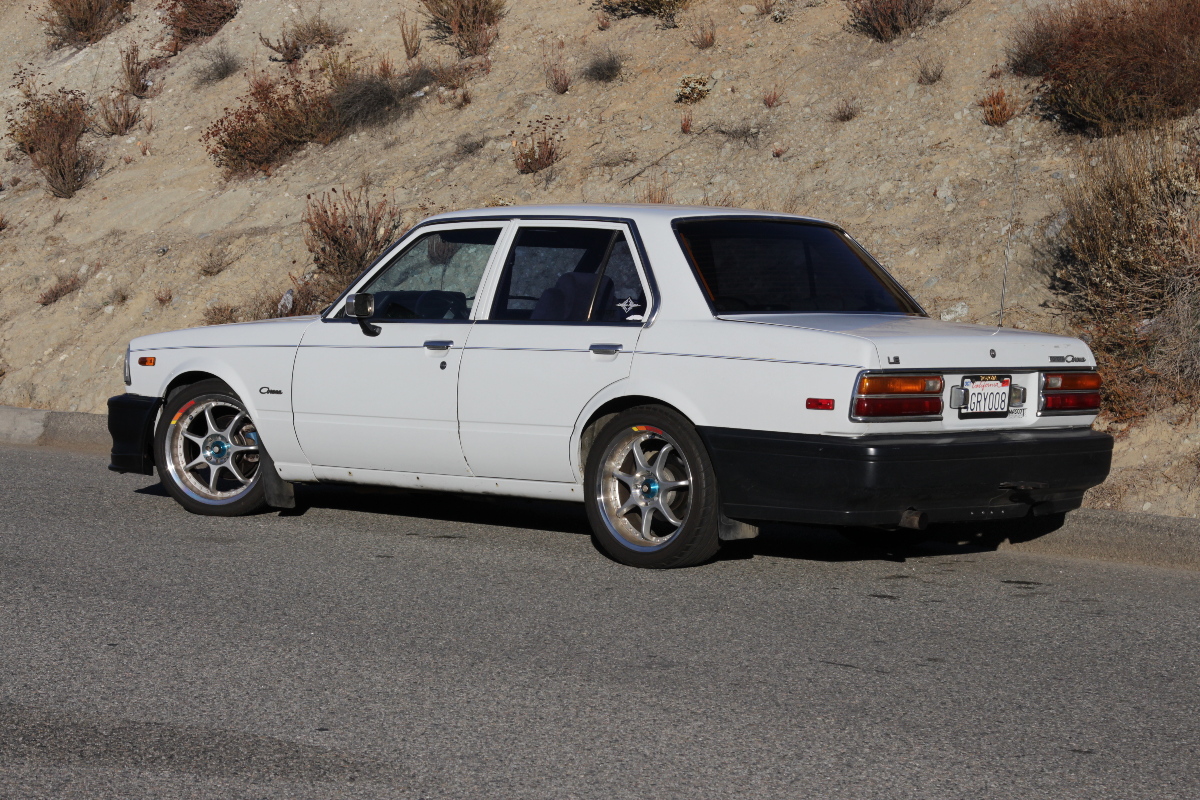