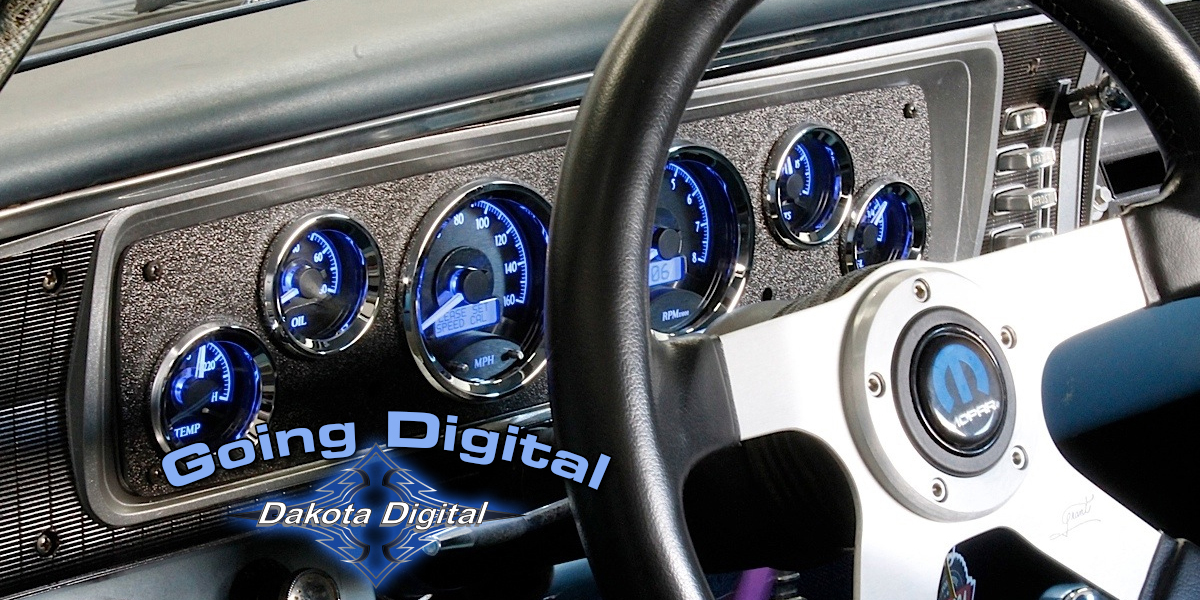 Older cars lack a few things that many enthusiasts find important. Sometimes we can forego the A/C or power windows; maybe we can even do without power steering sometimes. These features are now standard equipment on just about every vehicle sold. But gearheads like numbers, right?

Few of us are satisfied with the old ‘idiot’ light on the dash; you know, the light that comes on usually when it’s too late and the damage has commenced? When you invest thousands of dollars into a new engine with twice the power of the tired old mill you just yanked out, glowing red lights on the dash aren’t going to cut it.

Installing additional gauges can keep you informed of what’s happening under the hood. But once those gauges are installed, the only option is to change the bulb color. Then one day I was introduced to Dakota Digital and I learned that there’s a lot more to them than just a pretty face.

You remember back decades ago, Dakota Digital had introduced digital gauges to us in the form of the VFD (Vacuum Fluorescent Display). These gauges eliminated the swept needle of standard analog gauges and placed the numbers right in front of you. They also eliminated the guesswork when the needle is on a small hashmark between two numbers, and the VFD Series gives an accurate reading.

Some enthusiasts like the digital readout, but some of us still like to see the needles sweeping across the gauge, so Dakota Digital introduced the VHX Series to a very approving audience. Much like the VFD, the control box receives the signal from the vehicle’s electrical inputs and converts them to digital signals. But with the VHX, that signal is sent to a gauge that displays the information in analog fashion – with a swept needle design.

The VHX Series has the same digital reliability as the VFD, but provides that old school feel with the needles telling you where your engine’s vitals are performing. But the VHX performs on a much deeper level; a display center in the speedometer and tachometer provide other information, as well. A built in clock, digital readout of your speed and engine rpm, and resettable trip meters are some of the options that set Dakota Digital apart from the others.

The installation of our VHX-1060 gauges works much the same as any other six gauge set, with the exception of the control box, which can be mounted just about anywhere under the dash. All of your input wires connect to the control box, and from there a series of standard telephone or CAT5 cables connect the control box to the gauges.

The easy part about connecting the gauges is that you can mount the control box where you want it first, and run all of your sender, ignition, power, and ground wires where there is easy access to the box. Once all of your wires are connected, a set of included patch cables plug the gauges into the control box. no more crawling around under the dash trying to plug a dozen or more wires into the gauges, or building a separate harness for the gauges.

Since the gauges are controlled by a digital signal, the low-current patch cables supply all the power needed to operate the gauges. This means that when you step on the brake pedal or switch on your high beams, you’ll no longer see the needles on your gauges doing a hula dance across the gauge. 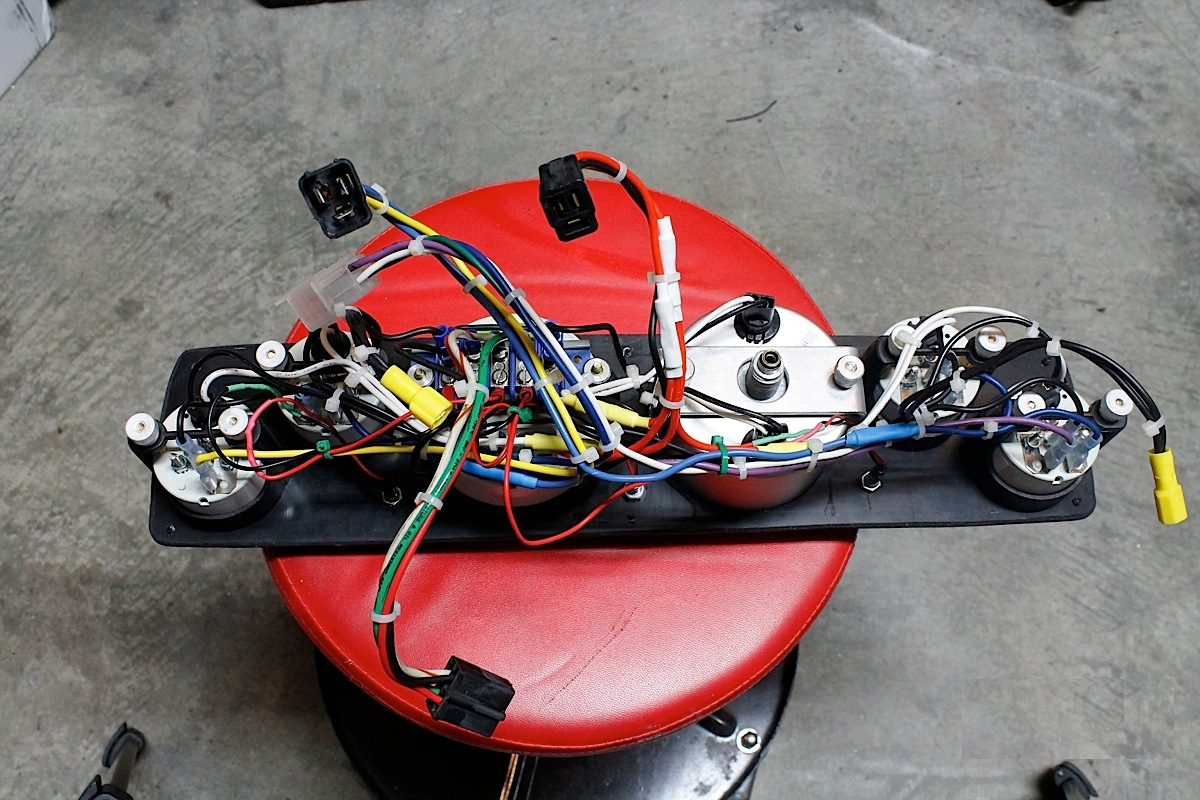 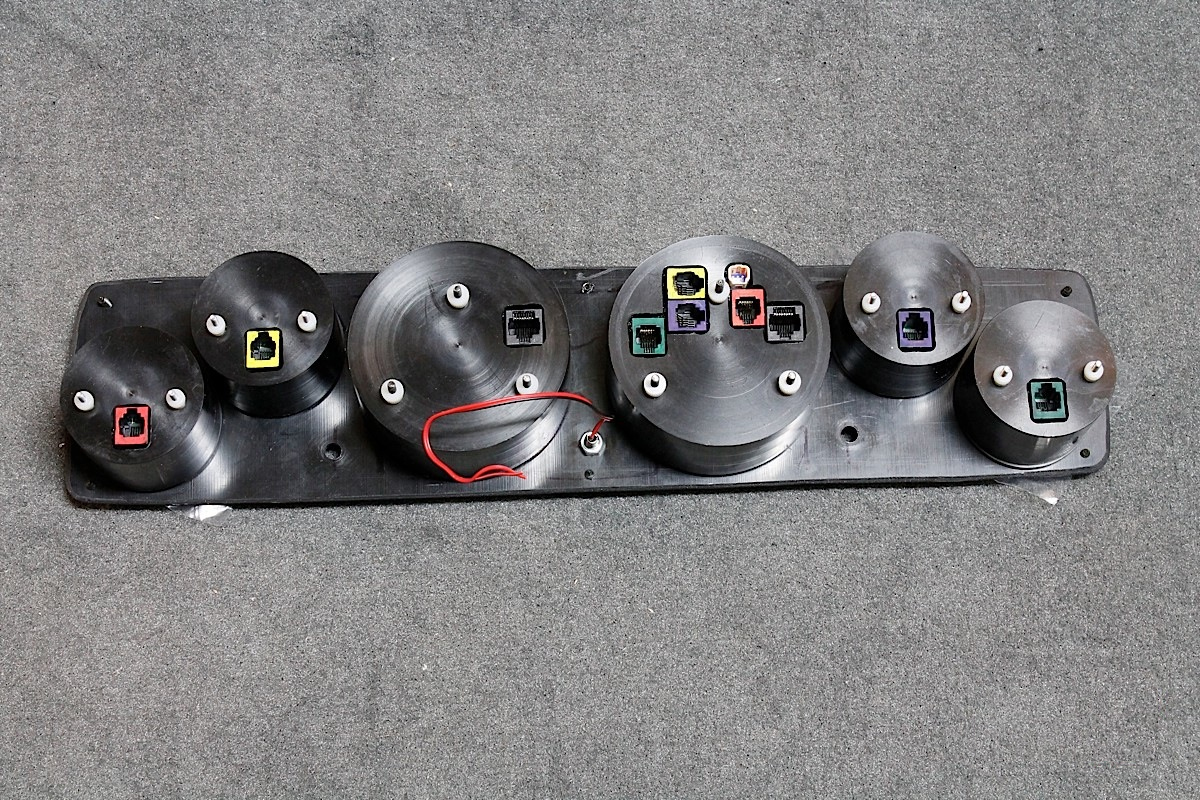 Left: Building a wire harness for all six gauges makes connections easier with standard gauges. Right: The clean, uncluttered look of the VHX Series gauges means simple, plug-in connectivity. The smaller gauges plug into the Speedometer, which plugs into the control box.

More Than Just A Speedometer

Going beyond the basics, the options and features of the VHX opens up many possibilities. You can display a variety of information on the LCD display as we mentioned above, but you can also set up warnings from some of your gauges, too. Inside each display you can program your temperature, fuel, oil, and voltage gauges to alert you when conditions are too high or too low.

For example, you can program you oil pressure gauge to flash on the LCD display when the pressure drops to, say, 10 psi. Do you want to be alerted when your coolant temperature reaches 215º? You can do that as well. And that’s just the tip of the iceberg with the VHX.

Another nice thing about having Dakota Digital technology behind your dash is that you can program difficult gauges, like the speedometer and fuel gauge. There are several popular ohm readings to choose from for the fuel sender, or you can program the gauge by filling the tank and using the buttons in program mode.

Once you install a set of gauges, let’s say you want to add another gauge or two. That usually means a pod on the A-pillar, a below-dash bracket, or, dreadfully cutting another hole in the dash. But not with Dakota Digital; add-on gauges are simple and programmable using BIMs (Buss Interface Modules) from its website.

Pressure, temperature, or other BIMs will interface with the control box and display to either of the two LCD displays on your gauges, and they’re also completely programmable. If you want to keep track of cylinder head temperatures and be notified of a high temperature, it will display that warning whether you currently have that BIM displayed or not: alerts show up regardless of current display settings.

Color Me Sold On Dakota Digital

The current VHX Series is available in black or silver alloy gauge faces, with red, blue, or white LED backlighting. The gauges are visible in nearly any lighting condition. While many other gauges will become difficult to read when the sun glares across your gauges, you won’t have that problem with Dakota Digital, the gauges are visible day or night, or when the sunlight is directly shining on only half of your gauge – visibility is still 100%.

But if those three colors aren’t enough, you can step up to the HDX Series for an expanded array of lighting combinations, or the new Retrotech Series (RTX) to maintain an OE look with the same, almost unlimited combinations of backlighting and illumination. All Dakota Digital instruments are assembled in house, and the gauge faces are printed at the facility as well using a multi-layering UV tolerant process that won’t fade in direct sunlight, and will withstand the temperatures that your car sees on hot summer days, or cold winter nights.

After a couple of years with Dakota Digital providing the feedback from my engine and transmission, it has become a standard for my own vehicles and a welcome addition to just about any hot rod, musclecar, or truck. Check them out at many major car shows and events across the country, or visit the Dakota Digital website and see for yourself why they’re among the best.