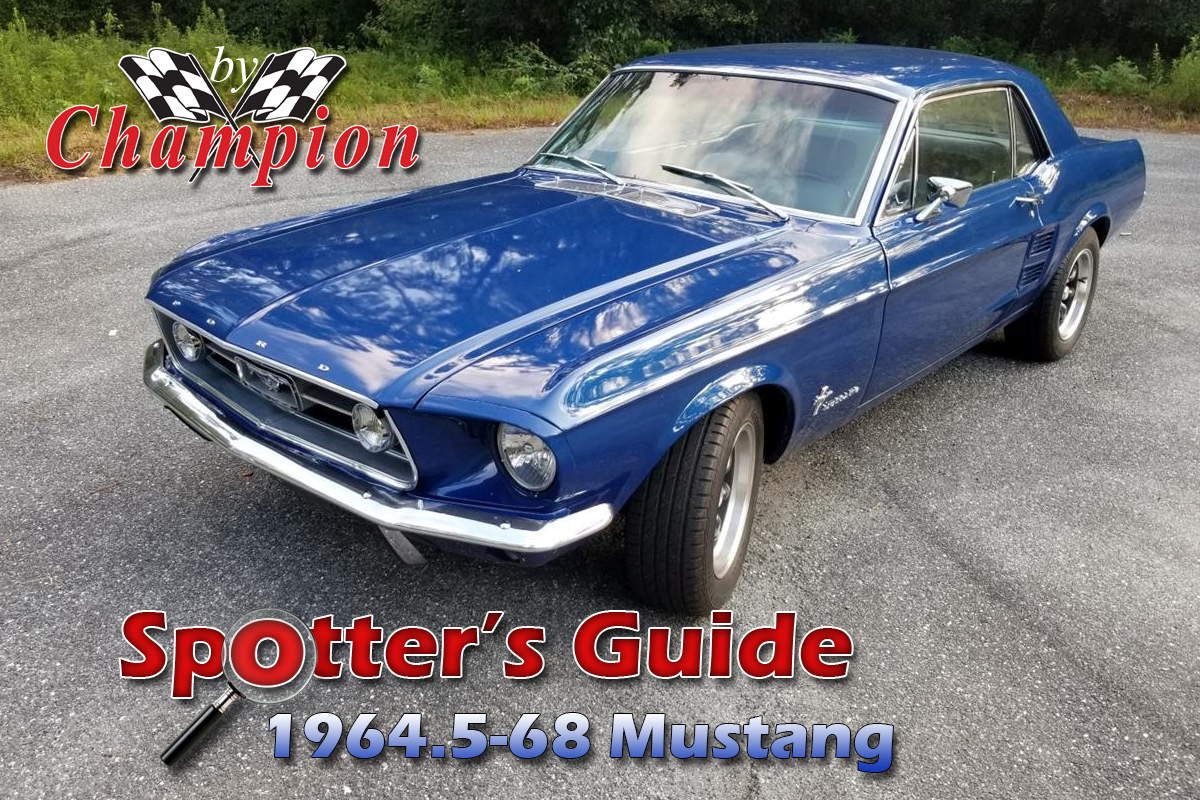 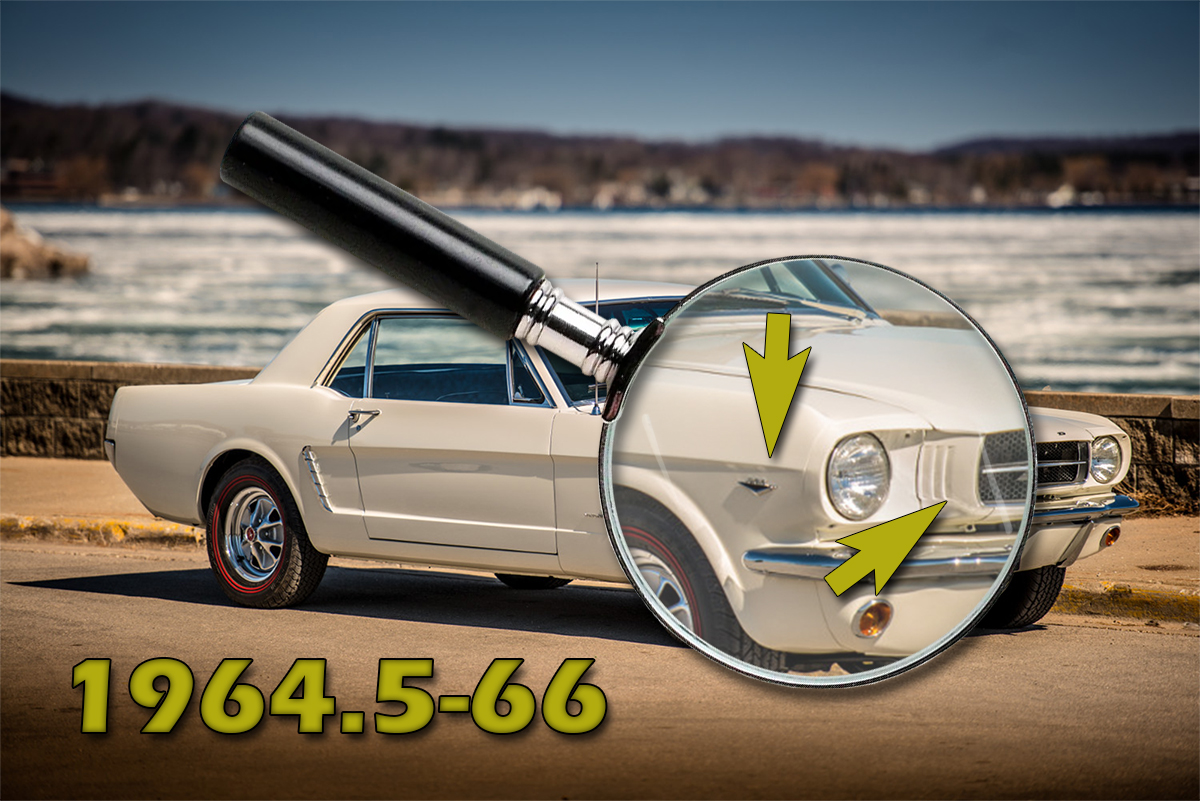 The Mustang was introduced in April 1964 as a coupe and convertible, and up until August of that year they are often referred to as 1964-1/2 models. Beginning in August, the 1965 models were produced, and they are very close in appearance to the ’64-1/2, with a few minor design changes. 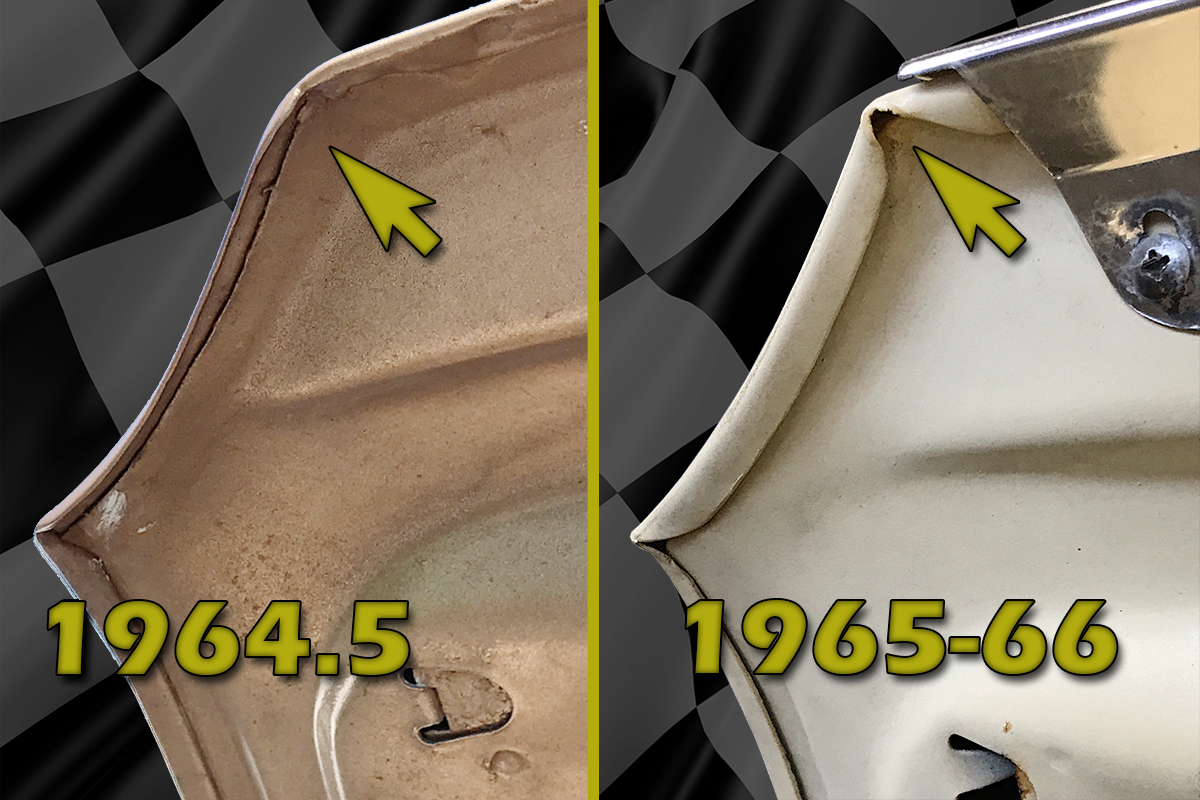 We’re told that there were many early 1965 cars that were identical to the 1964-1/2; sometimes they can’t really be distinguished. But there was one cue on the first Mustangs that separate them from the 1965. 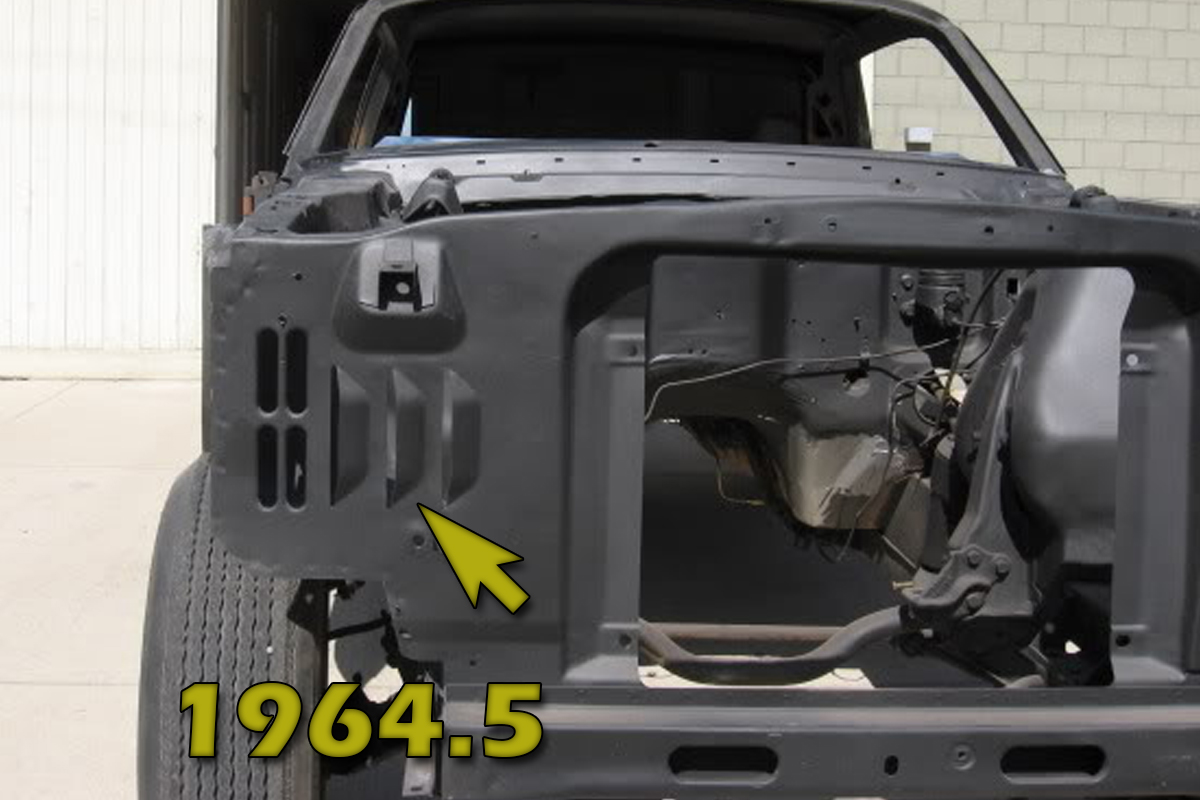 Of course, the VIN will tell you the year, but if the hood is up you can check out the core support on the passenger’s side. The 1964-1/2 will have three extra vents for the battery on the core support, for 1965-66 those three vents are missing. 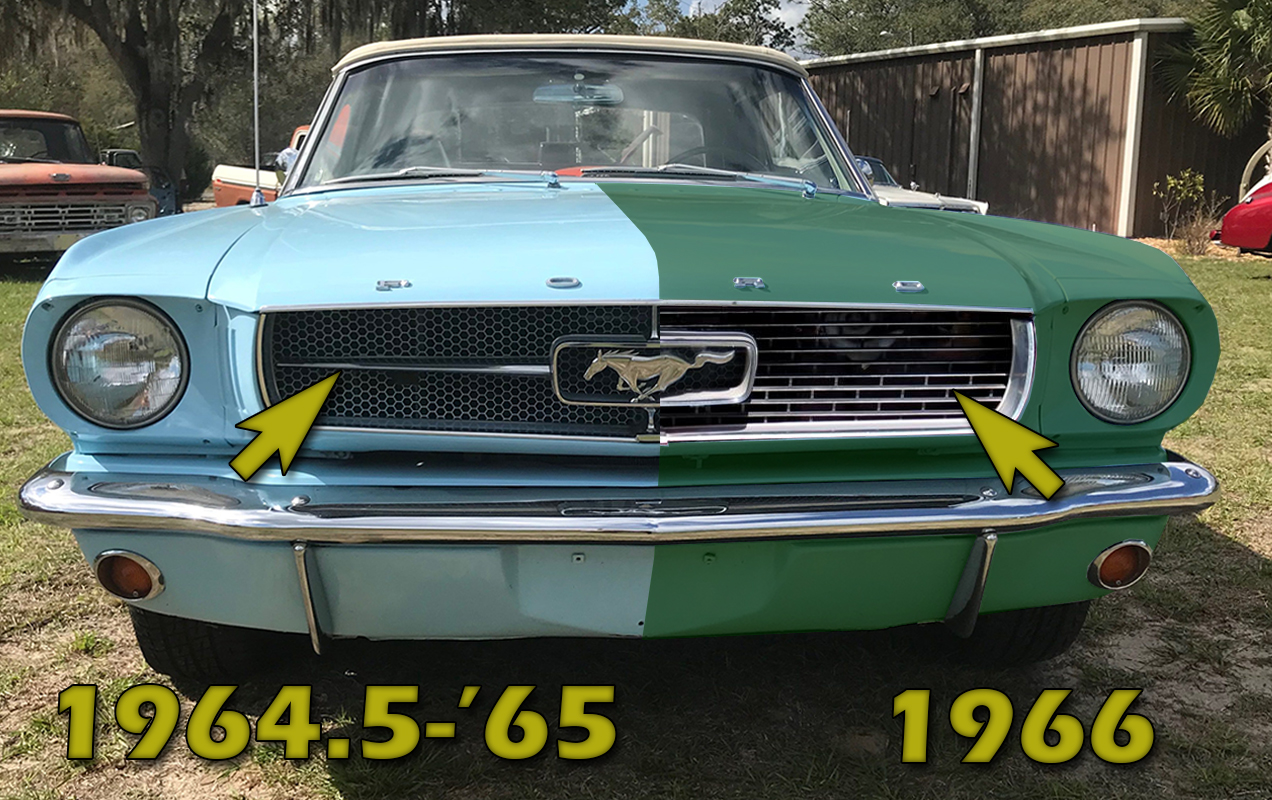 The grille design also helps to distinguish the years; 1964-1/2-65 had a honeycomb pattern whereas 1966 had a slotted pattern. Additionally, while both have the galloping Mustang, the crossbars are missing in 1966 and the center emblem ‘floats’ in the grille opening. 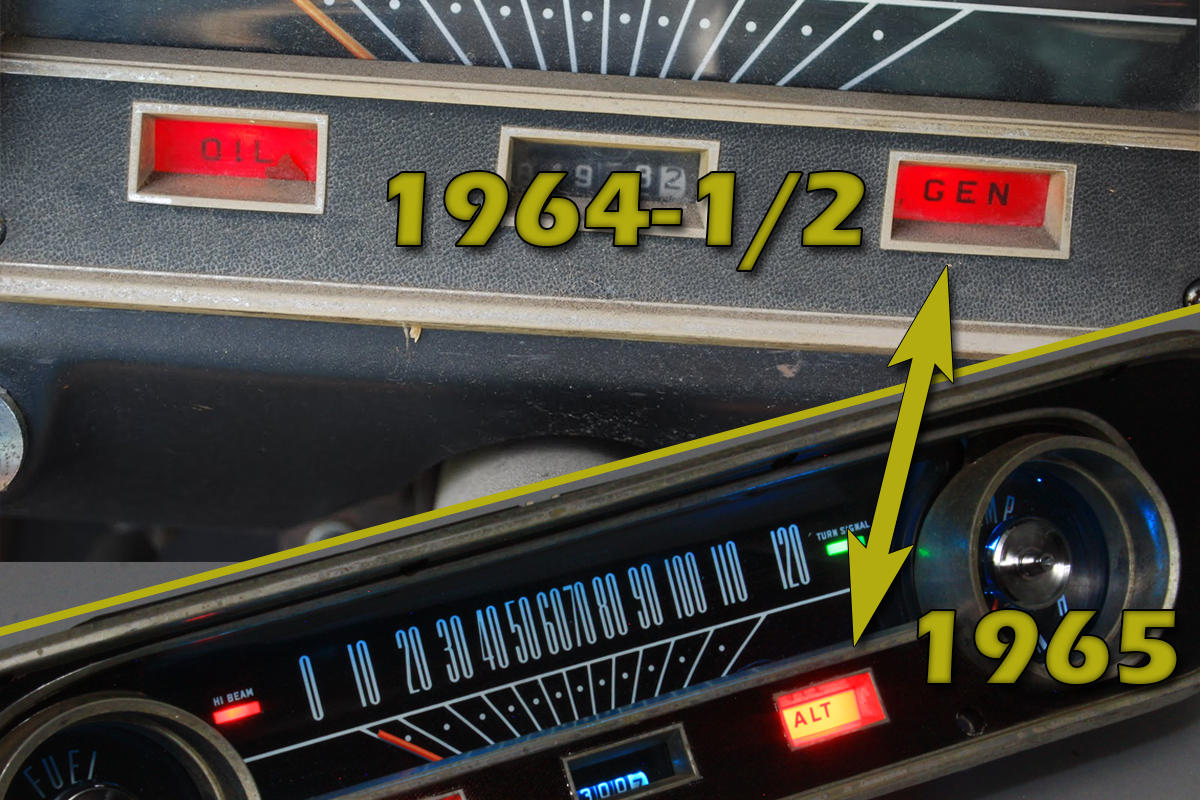 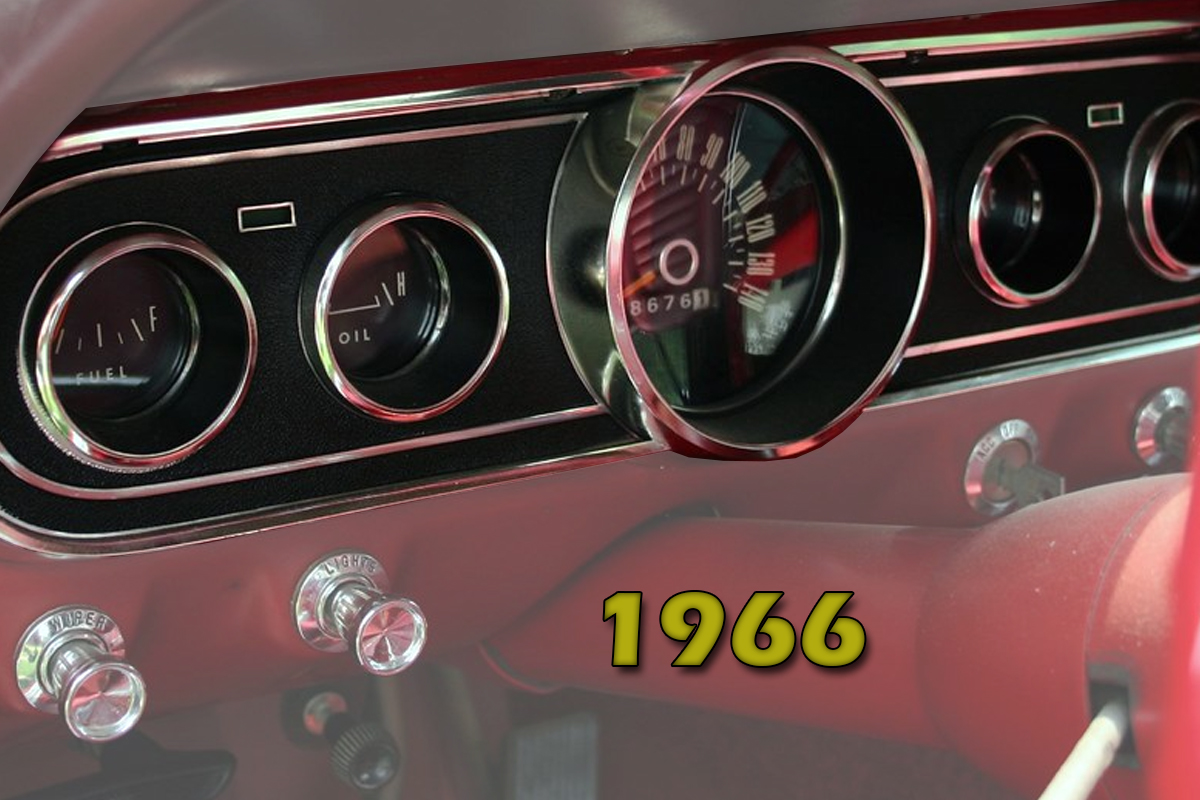 The experts at CJ Pony Parts provided much of the insight on the early Mustang. They also tell us that the inside door lock knob should be color matched to the interior for 1964-1/2, whereas in 1965 Ford switched over to chrome lock knobs. Given the age of these cars, though, it’s possible that it was replaced at some time. 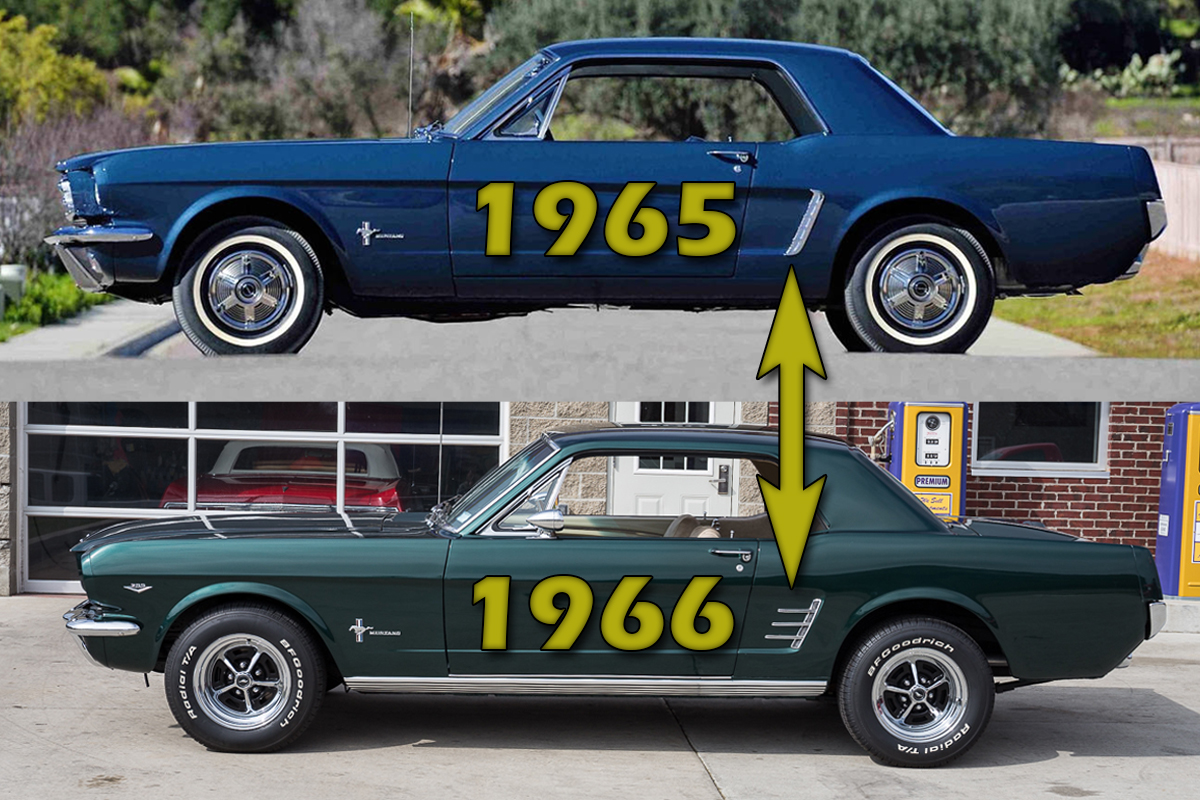 In addition to the grille, the 1965 and 1966 are much easier distinguish. The body didn’t change, but the trim is differs between the two years. Three horizontal bars were added to the quarter trim for 1966, giving it more of a sporty appearance. This was for the standard models only, the quarter trim is gone for the GT models, introduced in 1965. 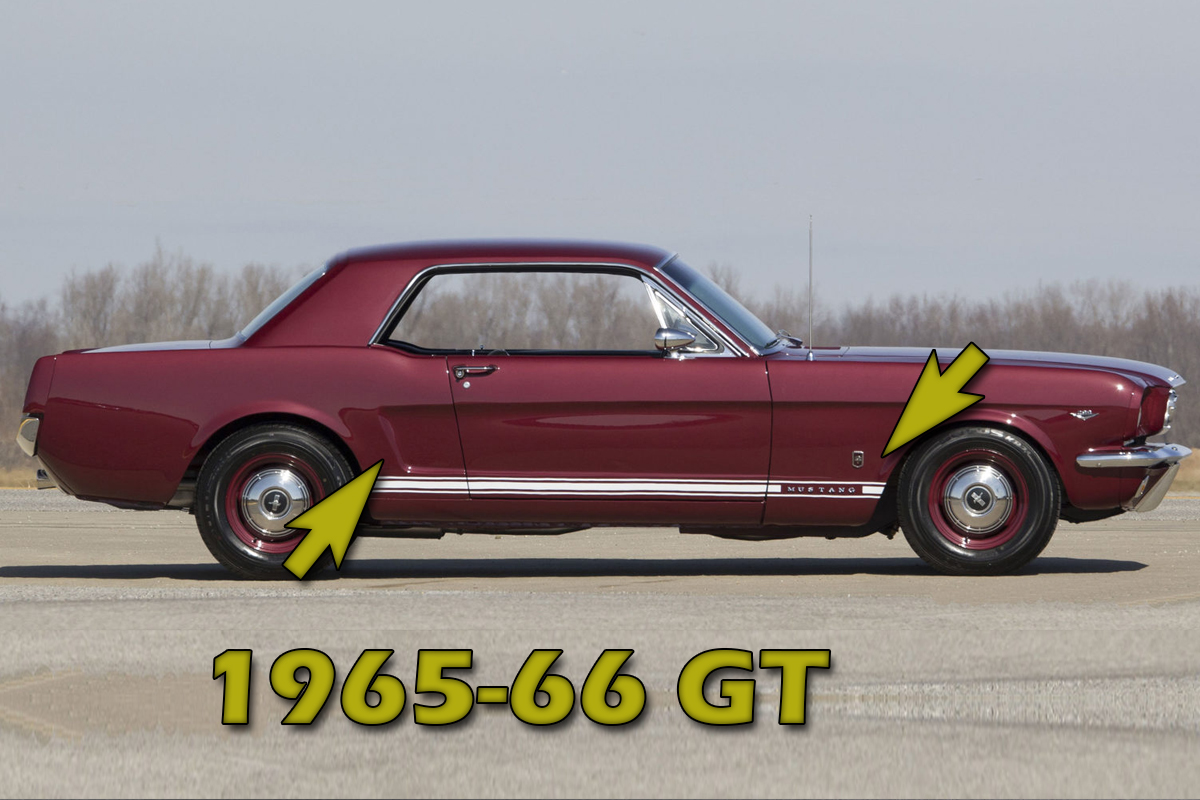 The GT model has similar styling cues as the standard model, which will help identify the year. But a stripe along the rocker panel, encompassing a lettered “Mustang” emblem, separates the GT from the standard model.

Above the stripe is a smaller, shield-type emblem, instead of the galloping Mustang with vertical bars. You can see the plain quarter panel above, lacking the trim that is present on the standard models. The 1965 GT models also had round gauges like the 1966. 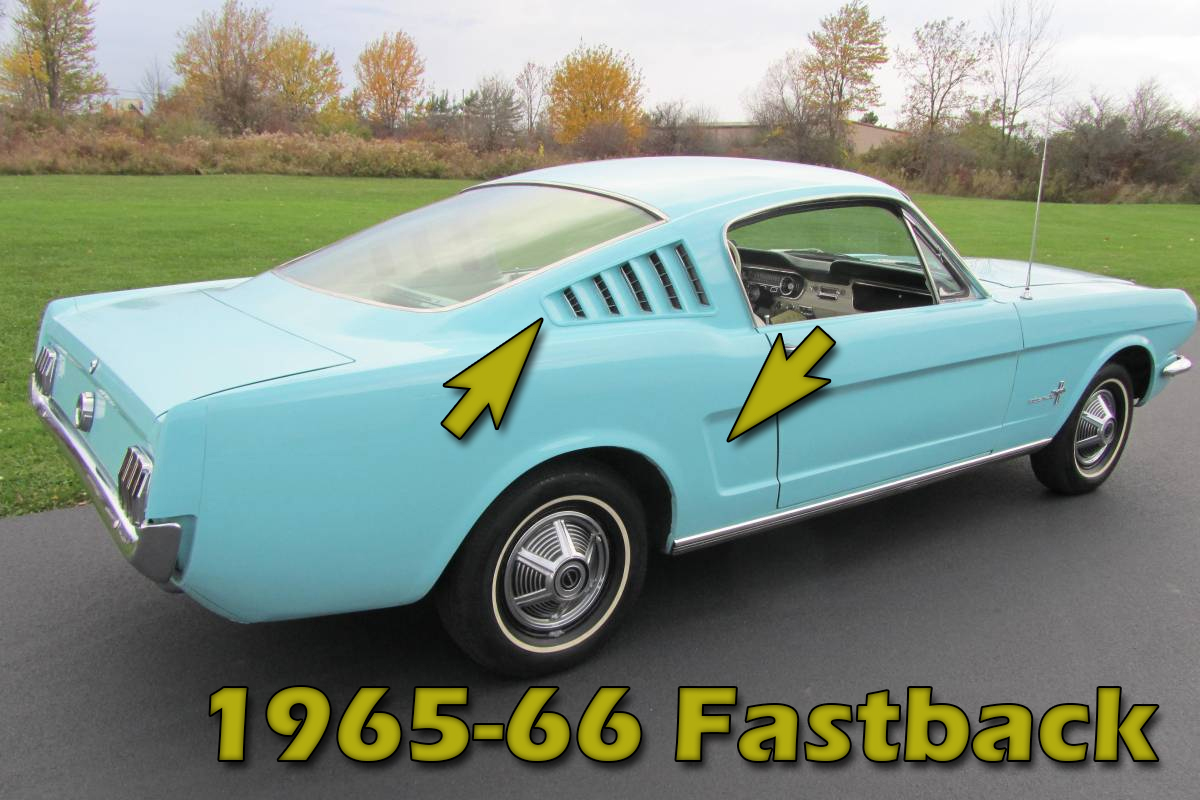 The fastback version was introduced in 1965; it has a trunk like the coupe does, but will have a different C-pillar and back window. There is a louvered quarter window trim on the standard and GT model fastbacks, but the lower quarter trim that is on the coupes will be gone.

To spot the difference between the 1965 and 1966, refer to the grille, as mentioned above. If you see a triple stripe along the rocker panel with a lettered “Mustang” emblem, that identifies the car as a GT model for both 1965 and 1966, just like the coupes. 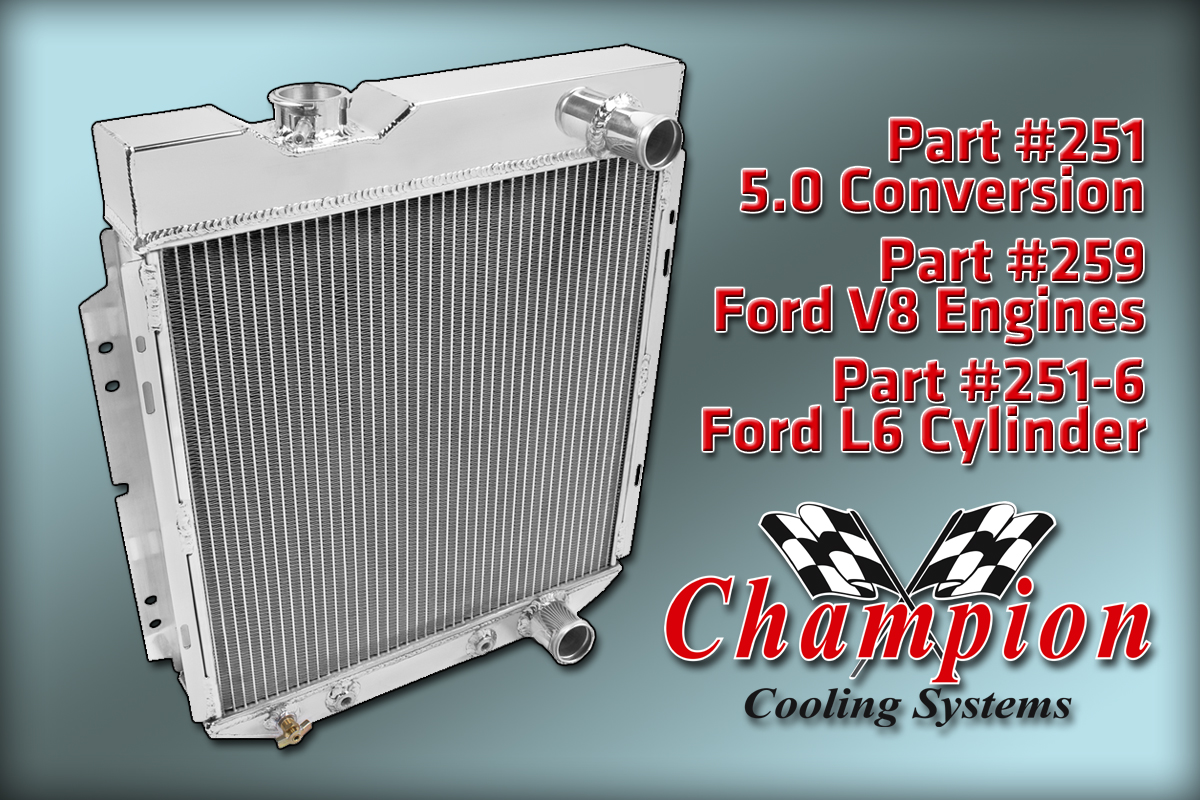 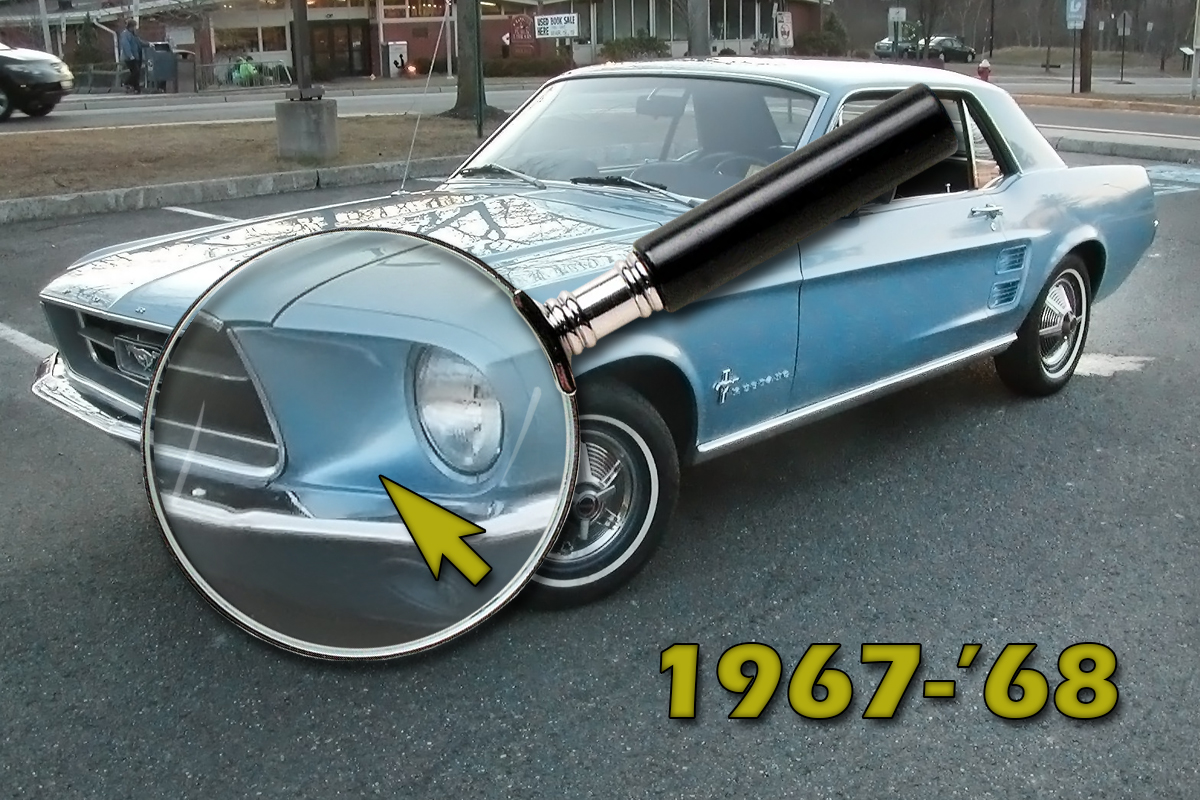 The headlamp bezel on the 1967-68 extends to the edge of the grille, and eliminates the filler piece that showed up on the earlier models. This distinguishes the 1967-68 from earlier models, and differences between the two are much easier to spot. 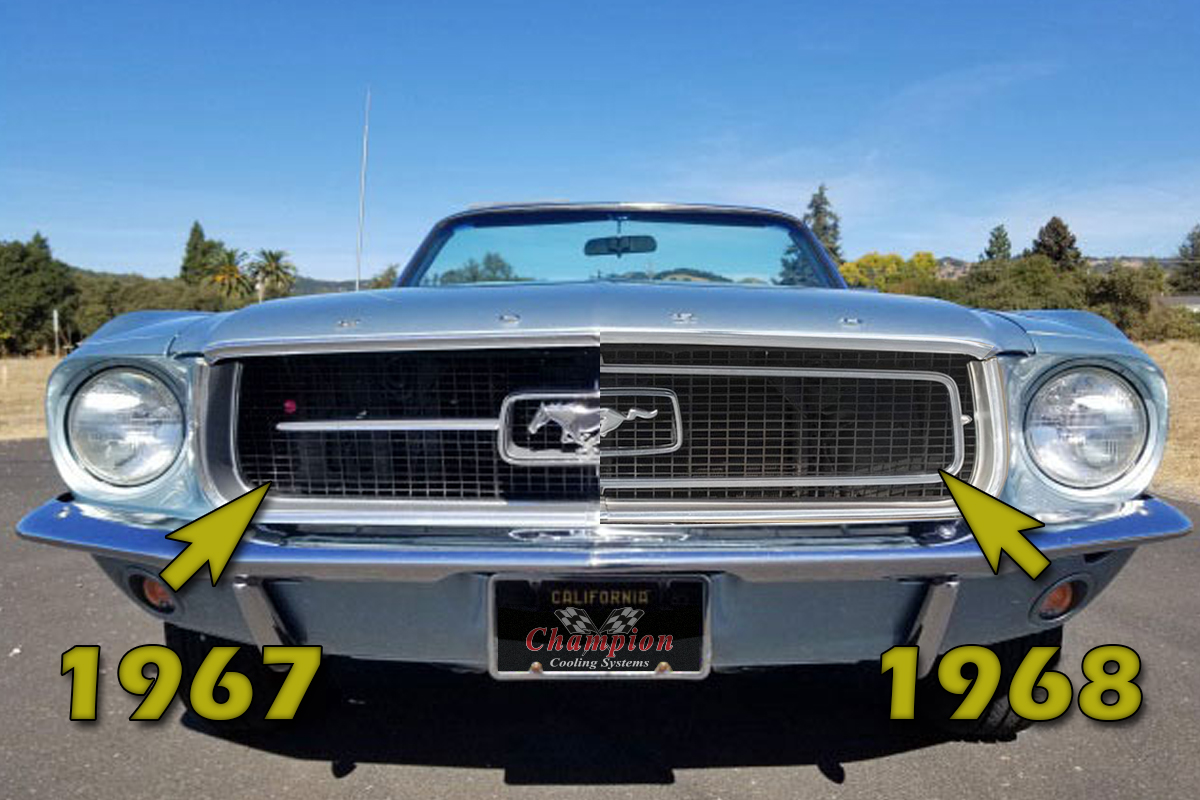 Like the earlier Mustangs, the grille is different between 1967 and 1968. For 1967 there will be a horizontal cross bar, and for 1968 there will be a halo around the grille opening. Both grilles have a similar crate pattern, and will have a slightly larger grille surround. Clear front signal lenses started showing up in 1967, also, with amber bulbs. 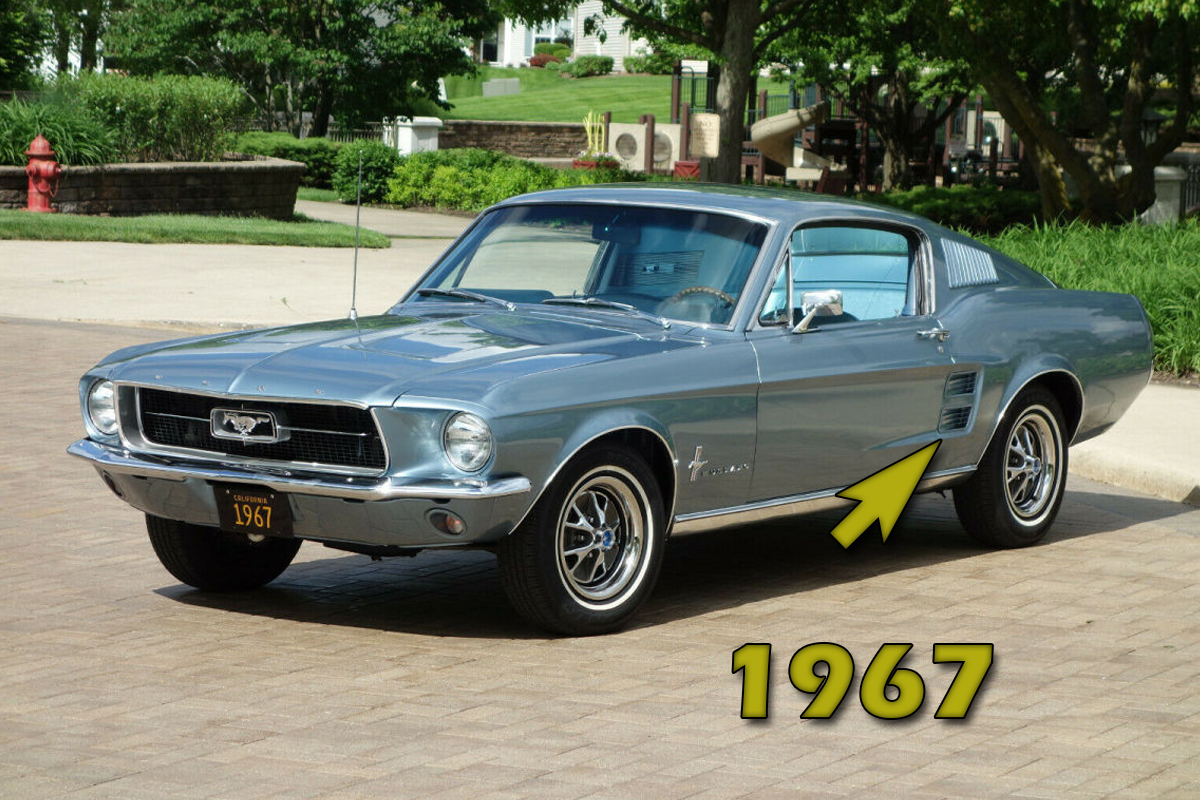 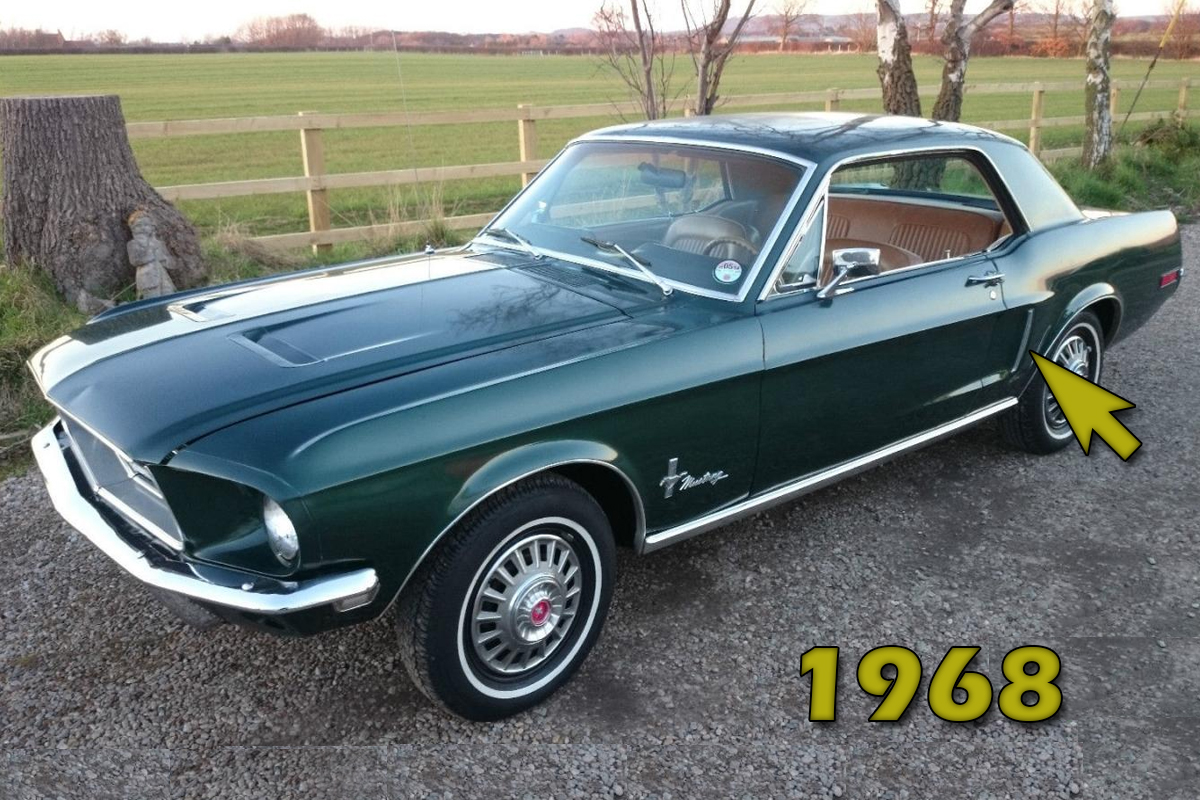 The quarter treatment is unique to each year. The 1967 model will have a dual ‘scoop’, whereas the 1968 has a smaller insert . and another difference that is much easier to spot are the side marker lights on the 1968, both front and rear, as seen below. 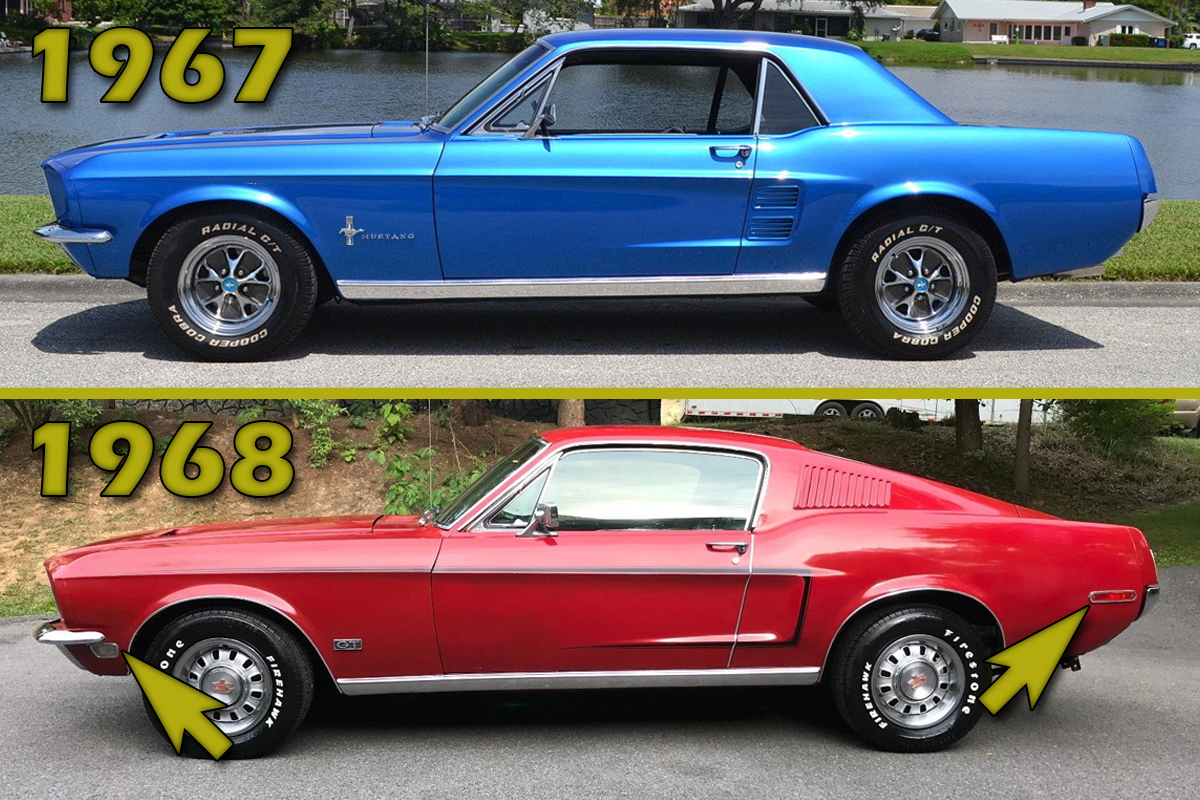 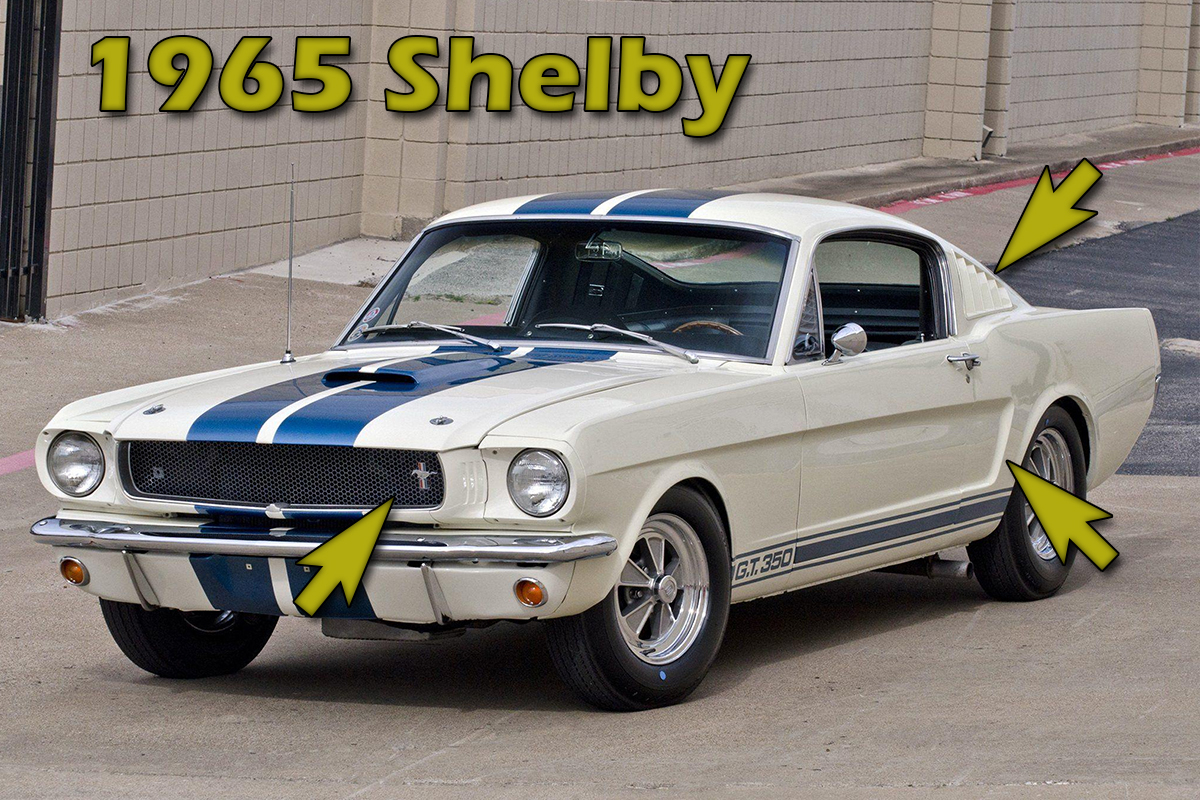 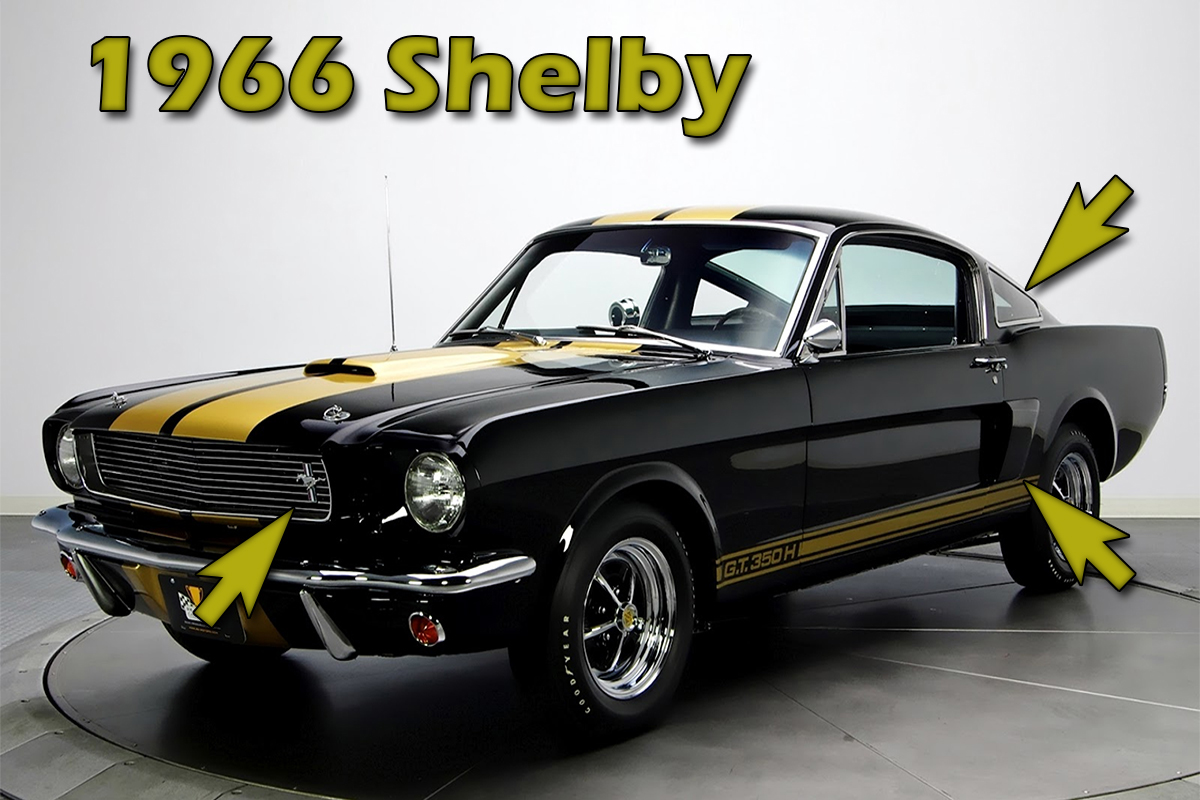 The Shelby came out in 1965 and will have a G.T. 350 stripe on the rocker panel. The grill for 1965 is honeycomb, while 1966 has the slotted grille. The grille emblem is off to the left side, and the front hood molding is gone, as are the fender emblems.

In 1965, the Shelby has a louvered quarter window, but in 1966 there will be a glass quarter window. Down lower, there is a scoop added to 1966, while the 1965 is plain. You will also find dual stripes up and over the center of the car and down the rear body panel. 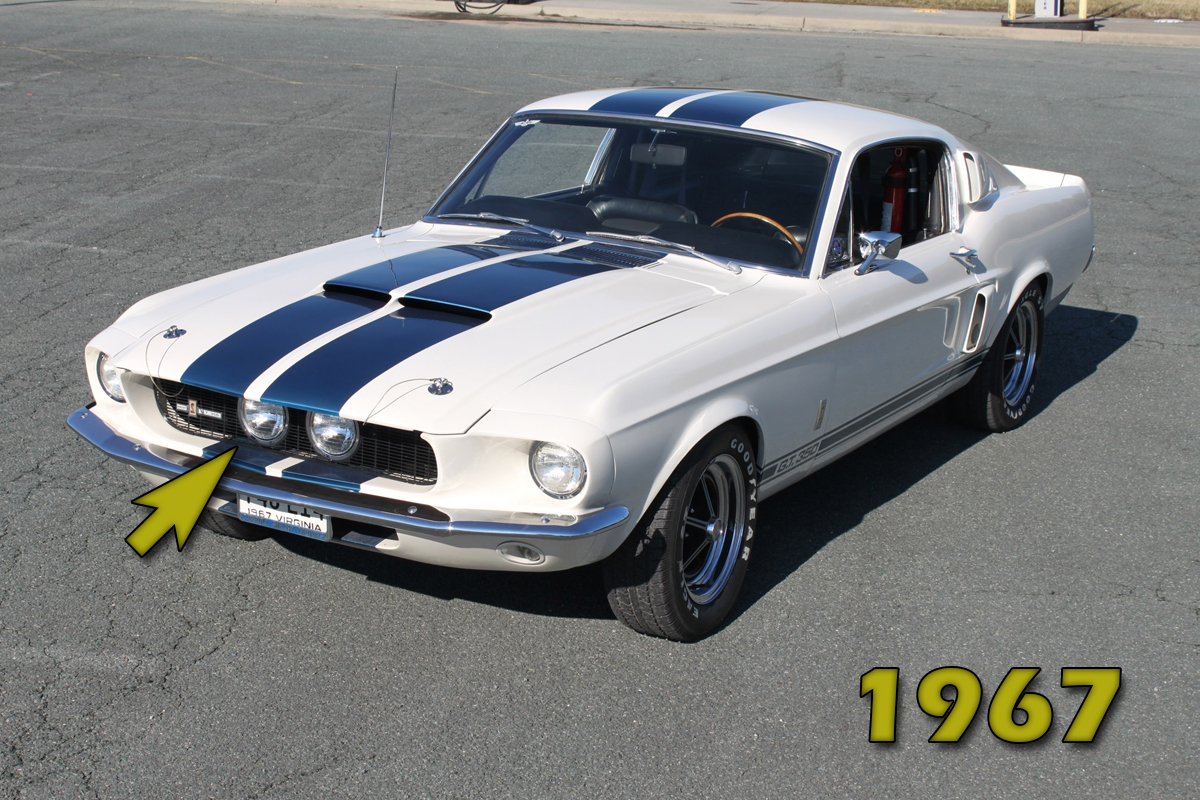 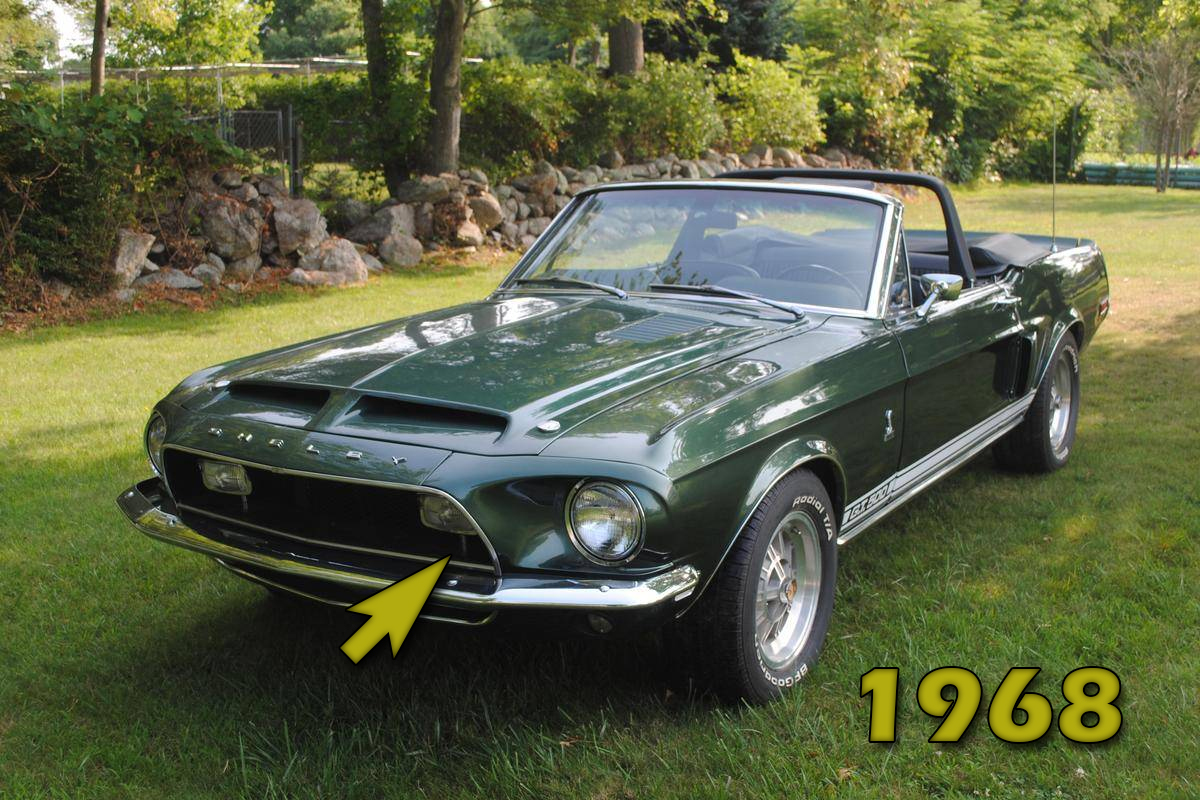 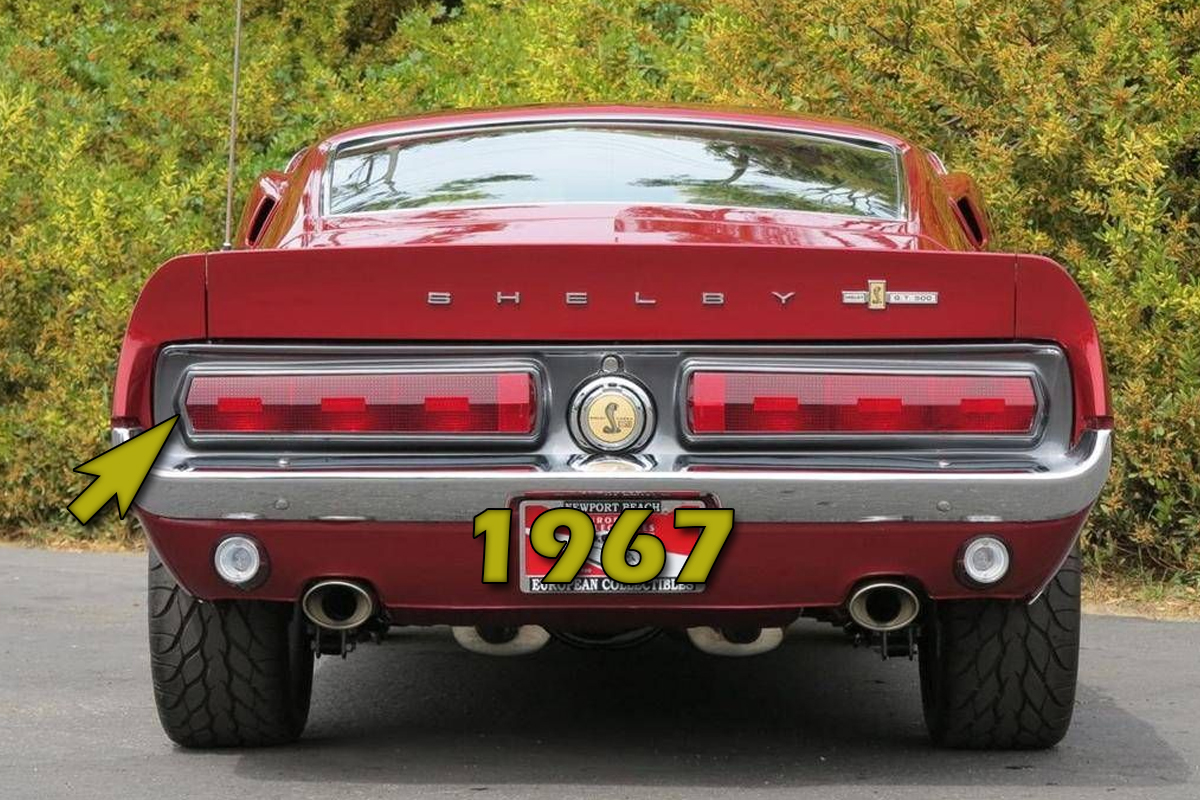 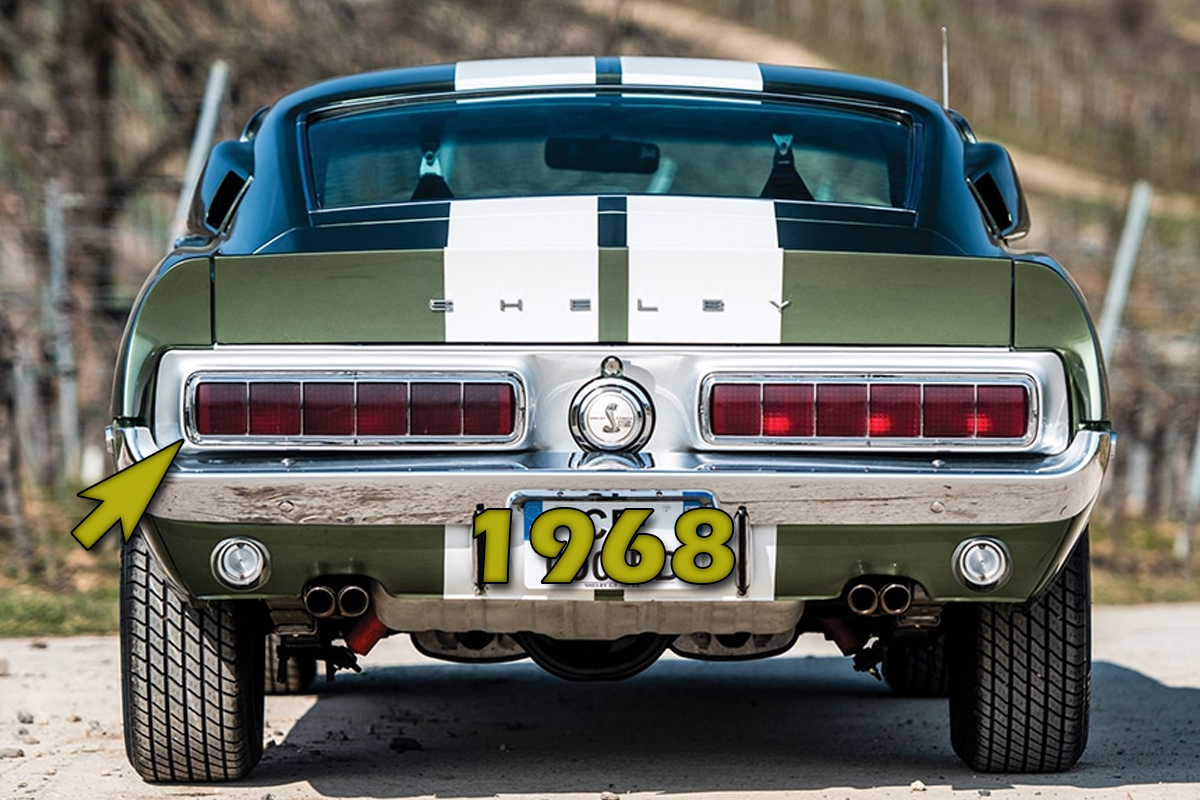 From the rear, the tail lamps are slightly different as well. The 1967 will be a full panel with a bit of point at the outer center; the 1968 will have vertical separations in the trim, and a smoother outer edge.

While this may not help you to become an expert with all versions and options on the 1964-1/2-1968 Mustang, hopefully our Spotters Guide will help you to distinguish what year the Mustang is, and with some of the cues on the Shelby you’ll be able to spot the clones from the real thing. 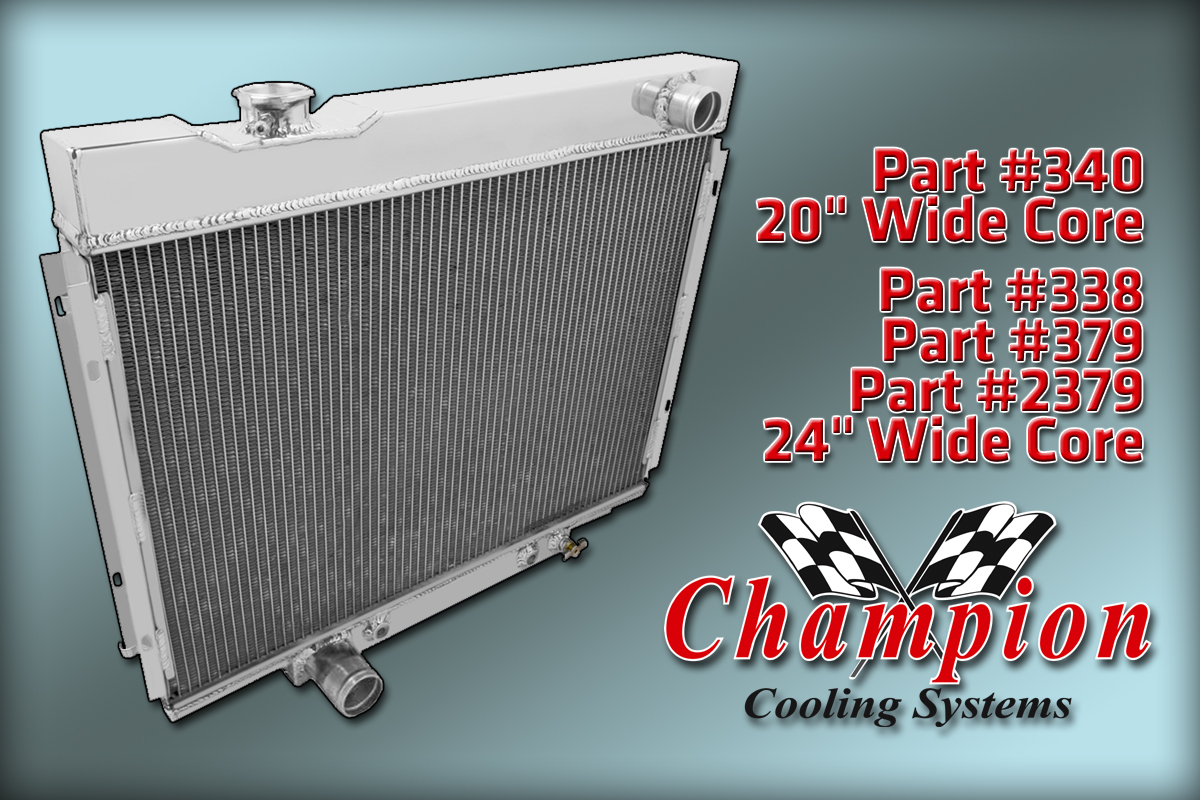